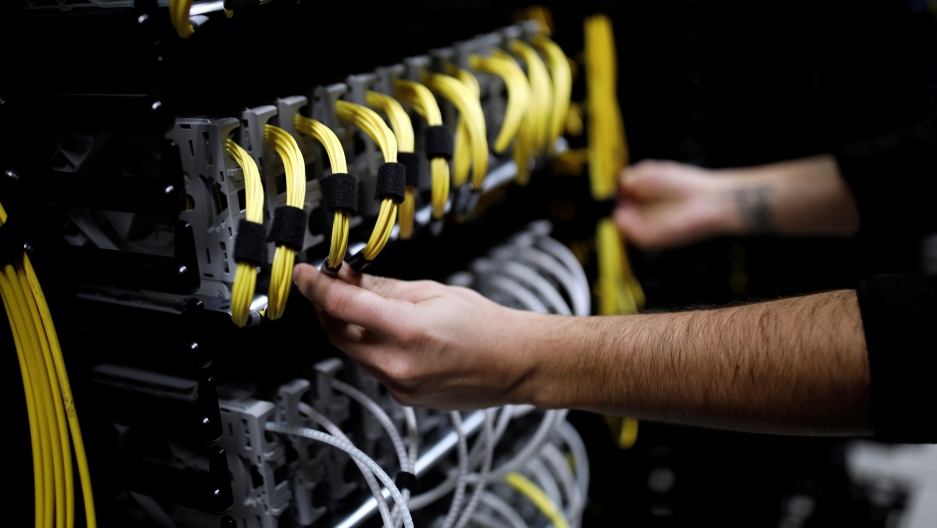 Cables run into the back of a server unit inside the data center of Equinix in Pantin, near Paris, France, on Dec. 7, 2016.

Michelle Murphy is a professor in Canada, but her research on the Great Lakes depends on water quality data collected by her neighbors to the south.

Specifically, the US Environmental Protection Agency.

“Without EPA data, you are blinded," Murphy says of her work studying chemical emissions into the Great Lakes.

“We’re worried that the incoming administration is going to remove data sets that are available now and make them inaccessible offline,” Murphy said. “And once they’re offline, we don’t know what’s going to happen to them.”

Data sets haven’t been purged from government websites yet, but all mentions of the word “climate change” have been removed from the official White House website. And memos have been sent out to workers at at least four federal agencies directing them not to send out news releases, post to social media, or write blog entries — though some bans have been modified.

A Trump transition team member said Wednesday that new studies and data by scientists at the EPA will be put on a “temporary hold” from being released publically.

All this has scientists worried about accessing publicly funded research.

But some of them have been preparing.

Shortly after Donald Trump won the election, Michelle Murphy and other academics in the US and Canada — including environmental studies professors, scientists and historians — started organizing efforts to back up data sets and documents from the EPA and other government agencies dealing with environment and climate data, including the National Oceanic and Atmospheric Administration (NOAA) and NASA.

Murphy helped found the Environmental Data and Governance Initiative, or EDGI, which in mid-December hosted a data archiving event at the University of Toronto, where Murphy teaches.

Fueled by pizza and coffee, about 150 people spent a Saturday backing up EPA data. The work didn’t stop when they went home.

EDGI is one of a handful of new and overlapping data archiving efforts that have emerged during the Trump era.

The Toronto hackathon was followed by one that focused on NOAA data in Philadelphia in mid-January, led by the group from University of Pennsylvania that runs the Data Refuge.

“We started really building a coordinated network of data rescue events, so Philadelphia was the second data rescue event,” said Data Refuge coordinator Bethany Wiggin, followed by events in Chicago, Indianapolis and Los Angeles. “And there are others coming on.”

Archiving events are planned for Jan. 27 and 28 in Ann Arbor, Michigan, and for Feb. 4 in New York.

Most of the organizers are based in the United States and Canada, but some of the volunteers who download data for a third group, Climate Mirror, are based around the world.

Jonathan Schmid, a student in Arabic studies at the University of Leipzig in Germany, says he’s downloaded about a gigabyte of satellite images from NOAA.

“I’m not a scientist involved with climate or anything, I’m not interested in the data myself,” Schmid says. “For me, it’s just lending my basement out to someone who doesn’t have the space or feels like their basement might not be safe.”

Another terabyte of US data on temperature and greenhouse gases lives on Antonios Chariton’s computer in a small, windowless room in his apartment in Crete, Greece.

Chariton is a security researcher, not a scientist, but he knows climate change knows no borders. So he’s eager to lend a hand — or a server — to help them.

“It will help them in a way that will also help us. So, if scientists can work on better ways to slow down global warming, I think it can benefit us, too,” Chariton says.

The reams of raw data gathered by scientists working for American agencies is used not just in the US or neighboring Canada, but around the world.

“Climate models are used everywhere, Japan, China, Germany, the UK, the US of course, but they all use the NOAA data to start from,” Levermann says. “That’s just one example.”

“There was moments when people would say to us, ‘You’re being paranoid,’” Murphy says. "'Why are you worrying?’ And I’m sad to say that it looks like we will have been very wise to have taken the actions we did."

Murphy’s concerns are rooted in recent Canadian history. Prime Minister Stephen Harper, who left office in November 2015, waged what some called a “war on science.”

“We had things like libraries and archives being destroyed, we had scientists fired and muzzled,” Murphy says. “In order to get data from scientists we would do Freedom of Information requests and the majority came back redacted if you got them at all. It was a brutal time for science.”

Murphy is busy preparing for a similarly brutal time in the United States, as is her colleague Bethany Wiggin, who says she’s taking her cue on how worried to be from her contacts in Washington.

“The insiders who we’ve been talking to, at the Department of Agriculture but also at other agencies, are concerned,” Wiggin said. “And that’s our best gauge on how concerned we should be.”