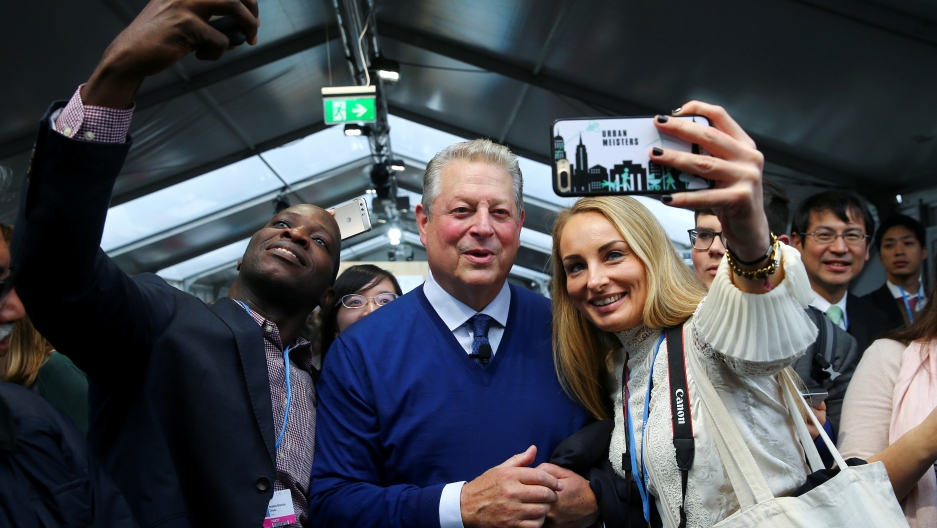 Former US Vice President Al Gore poses for selfies with delegates and observers of the COP23 UN Climate Change Conference 2017, hosted by Fiji but held in Bonn, Germany, Nov. 10, 2017.

The United Nations climate summit in Bonn, Germany, closed early Saturday morning after making modest progress toward long-term goals with the help of a subdued and downsized US delegation.

US diplomats worked alongside representatives of nearly 200 other countries to hammer out the details of the Paris climate agreement at the first UN summit to take place since President Donald Trump pledged to pull out of the international pact.

“This was one of the first really big testing points for how the US is going to be engaging with other countries on climate issues,” Politico reporter Emily Holden said.

Supporters of the agreement feared the US would try to slow progress toward its implementation, but those fears went largely unrealized in Bonn.

White House aides and energy industry officials held a high-profile panel promoting efficient coal power as part of the solution to climate change, which was largely seen as contrary to the summit’s larger goals. But, simultaneously, State Department officials negotiating in closed-door sessions seemed to use a similar playbook as Obama-era delegates.

No big decisions were expected at the talks this year as delegates largely worked toward 2018 deadlines for key elements of the Paris Agreement.

“There was some modest progress made on completing a rule book for exactly how countries will ratchet down their greenhouse gas emissions under the Paris Agreement,” Holden said.

The rule book is due at the next UN Conference of the Parties in Poland in 2018, and Holden reports many negotiators said they may have to meet before then to complete the rule book on time.

But even if countries stick to the commitments they’ve made so far, the world is still not on track to avoid 2 degrees Celsius of warming compared to preindustrial levels, the goal written into the Paris Agreement.

“We need more action, more ambition, and we need it now,” said Patricia Espinosa, the United Nations climate chief, according to The New York Times.

Leaders laid the groundwork in Bonn for a formal dialogue to assess how far their domestic pledges to cut carbon fall short of the 2-degree goal. In 2020, countries are scheduled to submit stronger goals to the UN.

China steps up but doesn’t fill US void

If the international community had one eye trained on US delegates to see how they would behave at the climate summit, the other eye was tracking representatives from China.

China under President Xi Jinping is positioning itself as the new global climate change leader, and environmental leaders were watching closely to see if the country’s actions would match its rhetoric.

"If China is really going to step into the leadership vacuum created by the United States,” Andrew Light, a former Obama-era climate negotiator, said earlier this month, “then they must also accept that other countries must be allowed to see what they're doing with respect to their emissions.”

That issue was not resolved in Bonn.

“Some people felt that China was really trying to exert its power, working with other developing nations to push some of its goals, but not necessarily taking on the same kind of role that you’d seen from the US,” Holden said.