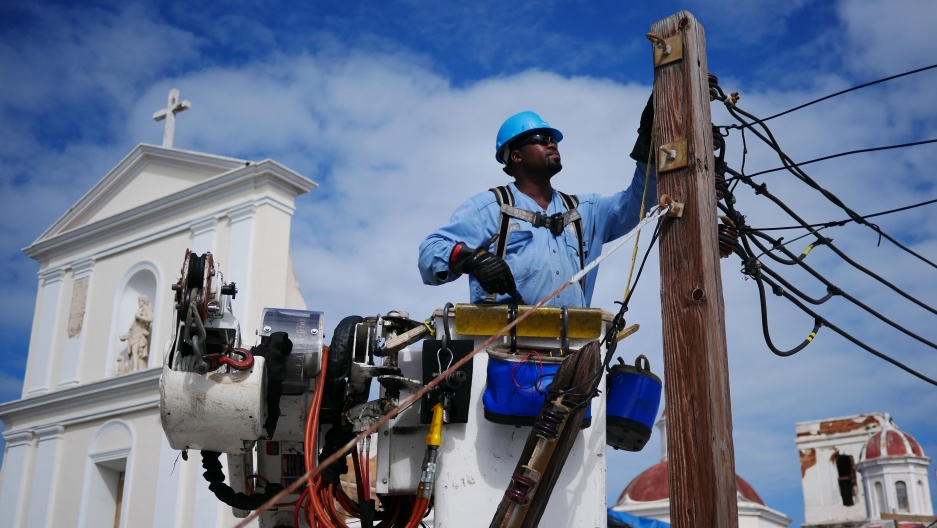 Marc Noisette of Westchester County, New York, fixes the cables on an electric post opposite the Cathedral of San Juan in the historic quarter of Puerto Rico's capital.

When Aaron Anaya arrived in Puerto Rico in November to help restore the San Juan electric grid, he realized he’d have to start with the maps. Anaya, an electrical engineer with Con Edison in New York, spends most of his 16-hour days translating work requests from Puerto Rico’s power authority, PREPA, into assignments for crews from New York. But PREPA's maps didn’t have the detail the workers needed.

“You have to be able to relate what’s on the map with what’s in the field, and it’s very different,” Anaya said. “It looks nothing like flat little lines. Things are everywhere.”

So he numbered each electric pole and papered maps over the walls of the de facto switching room, set up in a sea-facing conference room of San Juan’s Marriott hotel. Colored arrows show the movement of work crews and the location of switches.

More than 450 New York power workers are imposing order on San Juan’s tattered grid. Several hundred more workers with the Army Corps of Engineers are repairing the infrastructure in the rest of Puerto Rico. Together with PREPA's employees, it amounts to about 3,500 electrical workers.

On a recent morning, Anaya drove me to see Con Ed workers in blue hardhats restringing electrical wiring on a rooftop facing the Cathedral of Old San Juan. An ice cream vendor rang his bell on the corner. Richard Gonzalez, the crew supervisor, numbered the challenges of restoring the grid in the historic district.

“This is stuff that we’re not used to,” Gonzalez says. “Definitely it’s challenging to work on the rooftops. Not poles, it’s posts up there, getting access, very tight streets with a lot of pedestrians, and vehicular traffic.” 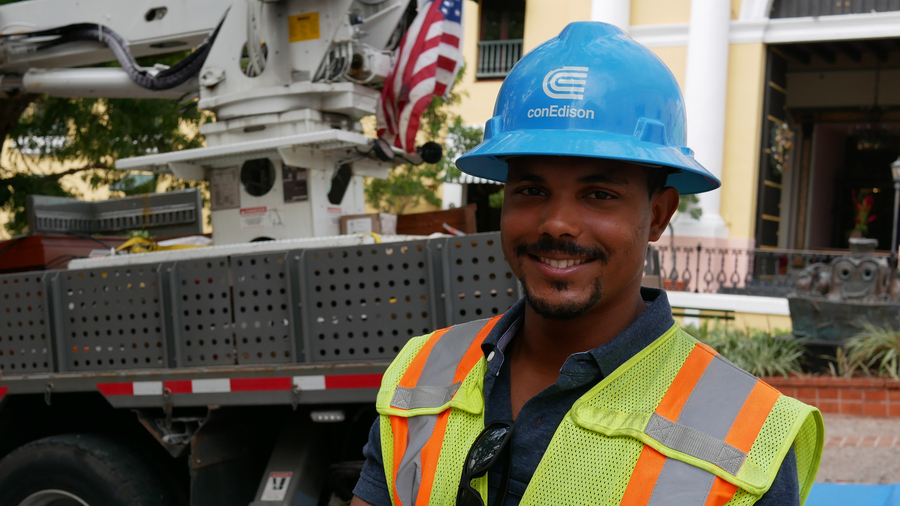 Con Edison crew supervisor Richard Gonzalez oversees linemen fixing the grid in Old San Juan. He says he can hear announcements on the radio for residents to honk at Con Ed trucks to show their appreciation.

It’s not just the physical infrastructure that’s taxing. PREPA is in disarray. The director resigned in November amid questions over a $300 million contract he awarded to White Energy, a small Montana firm, to restore the grid. That deal was later canceled. The utility is also $9 billion in debt and over the years maintenance has lagged. Many customers in San Juan say even before hurricane Maria blackouts were a regular part of life.

Alex Echeverría, an engineer, usually works to protect transmission lines and equipment at the New York Power Authority. Born in Ecuador, he speaks fluent Spanish. He says he came to San Juan days after the storm as part of an emergency New York crew that assessed the damage to the grid. Nearly all of the island’s 363 substations had been damaged.

He says the larger New York contingent only arrived in November after PREPA had made a formal request for their help. Echeverría says he thinks PREPA has a “cavalier work environment,” and that PREPA workers recently removed a ground cable that a New York crew had run to prevent electrocution.

He says he’s complained to PREPA leadership that security was such a concern that, "we may say ‘look, we’re not going to continue working if you don’t get your act together and make sure we’re allowed to work safely.’”

Every post and cable arrives in Puerto Rico by boat and Echeverría says he has started requesting building materials via the US Army Corps of Engineers instead of going through PREPA's byzantine bureaucracy.

“They have good people, they’re trying but there’s just like one person, for all of Puerto Rico,” he says. “It just doesn’t make any sense.”

The director of PREPA's press office did not respond to a request for an interview. A number of PREPA's workers have no electricity at their own homes. 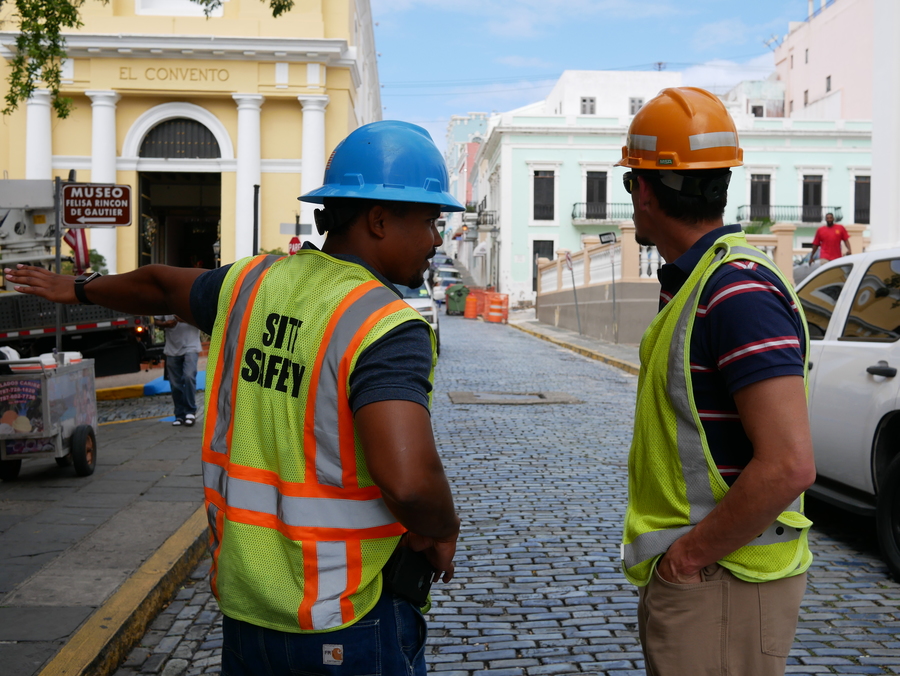 Aaron Anaya says he doesn’t know what percentage of the city residents have power. Before the storm, PREPA's records did not reflect all their customers. The mayor of San Juan estimates half the city still lacks electricity.

Still, every day, a few more lights go on. On a recent afternoon, Marisol Maldonado squeezed a Con Ed lineman outside the travel agency where she works in Old San Juan.

“These are heroes!” she crows. “They just gave us light! We have been without light since September.”

Extension cords snaked through the travel agency, plugged into the outlet that was powered by a generator for weeks. She says employees used their own cell phones to conduct business because the office had no phones or internet service.

The governors of New York and Puerto Rico announced a plan on Dec. 11 to rebuild the island’s power system to withstand future hurricanes and integrate more renewables. The sun beats down on the island, even in December, and yet most people rely on a rickety national grid that burns oil.

Aaron Anaya says he’s pushing ahead with fixing that grid. He walked along a street as generators thrummed.

“As far as the future of the system, that has to be designed by engineers and it takes time to do that. These people have been waiting long enough.”

On local radio, there have been calls for people to honk at the Con Edison trucks to say thanks.

“I laugh every time everybody starts honking the horn while we’re driving down,” says Richard Gonzalez. “[You wonder] 'what am I doing, am I going too fast, am I going too slow?' And you realize that’s their way of saying thanks.”