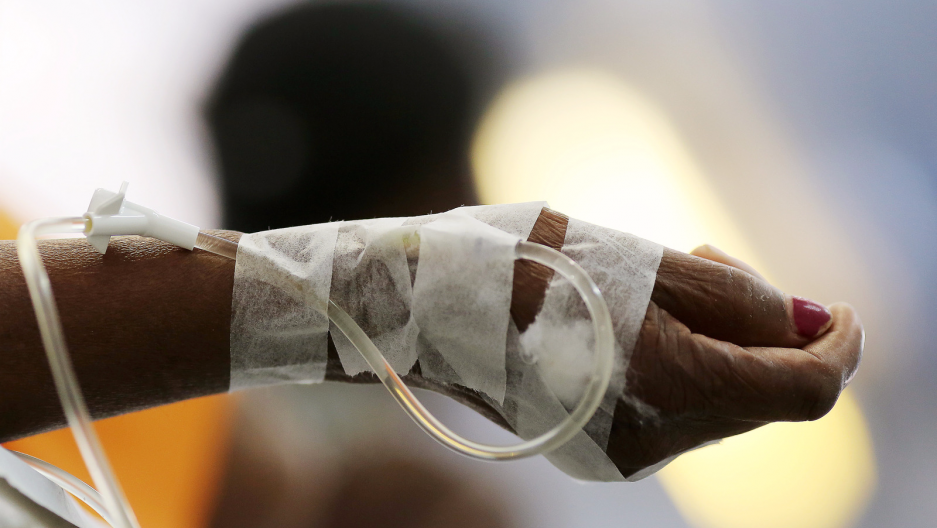 Hospitals in the US mainland are facing shortages of IV fluids and medicine because of Hurricane Maria's damage to Puerto Rico.

While Puerto Rico slowly recovers from the destruction of Hurricane Maria in September, hospitals on the mainland are dealing with some of the side effects of that destruction. They're struggling with a shortage of intravenous fluids directly linked the hurricane damage.

Baxter, a major manufacturer of intravenous fluids and bags, has three factories in Puerto Rico. In an email, a spokesperson at Baxter said 10 weeks after the hurricane hit the island, one of their factories in Puerto Rico is still being powered by a diesel generator. The other two factories are back on the electrical grid, but power is intermittent. Severe damage to roads and bridges is also slowing the recovery.

IV fluids like saline and dextrose are the lifeblood of hospitals. They’re needed to deliver medications and rehydrate patients. Hospital pharmacies use the smaller IV bags to mix medications. But they’ve been in short supply, especially since the hurricane, so pharmacists have relied on the larger bags. Now those larger bags are running out, too.

On Nov. 22, doctors at Massachusetts General Hospital in Boston received an email urging them to conserve intravenous fluids as much as possible:

"As some of you are aware, nearly all hospitals across the country are currently reporting significant shortages of IV fluids. Although IV fluid shortages have occurred intermittently since 2014, the impact of Hurricane Maria on Puerto Rico this fall has greatly exacerbated the situation, given the significant medical products manufacturing industry on the island that sustained damage. Although the initial impact from manufacturing shortfalls was mostly limited to shortages of small volume bags, there have now been secondary effects, causing a shortage of 'regular' IV fluid bags as health systems have had to switch their use to these products."

The email continues, “We have now reached a point where the shortage is of potential operational concern.”

Chris Fortier, chief pharmacist operator at Massachusetts General Hospital, says that conservation is key to dealing with the shortage.

“Where we can conserve, let’s conserve. Let’s make sure we’re reserving our products for the patients that we need them for, and when we can use other alternatives that are as equally effective as the product in an IV fluid, let’s do that,” he says.

Some substitutions include injecting medication with a syringe when possible, and assessing whether a patient can take meds in a pill form, or be rehydrated orally.

The FDA is temporarily allowing IV saline products to be imported from Baxter’s factories in other countries, but it’s unclear how much relief that will provide.

“It’s kind of robbing Peter to pay Paul, as they say,” Sadowski says. “It’s all going to the same good cause … making sure that we have what the patient needs.”

According to the FDA, there have been shortages of IV fluids on and off since 2014 for a variety of reasons, but nothing like this. In November, the American Hospital Association sent a letter to Congress stating that the US healthcare system was “on the brink of a significant public health crisis.”

“I think it’s about to hit critical mass over the next week or two,” Sadowski says. “There’s just no more to be had and you can only go so far with your conservation methods. We’re all doing everything we can do.”

Pharmacists also worry the ripple effects of Hurricane Maria won’t stop with IV fluids. Puerto Rico produces more pharmaceuticals for the mainland than any of the 50 states and more than any single foreign country, according to an FDA economic analysis released in November. Cancer drugs and HIV medication are among the products manufactured on the still-devastated island.

Fortier says it’s difficult to prepare for potential shortages because the FDA does not require companies to disclose where their drugs are made.

“There are other plants in Puerto Rico that made drugs, and will those products go on shortage? We don’t know,” Fortier says.

Hospitals say patient care is not being compromised, but they don’t expect the shortage to let up until at least early next year.