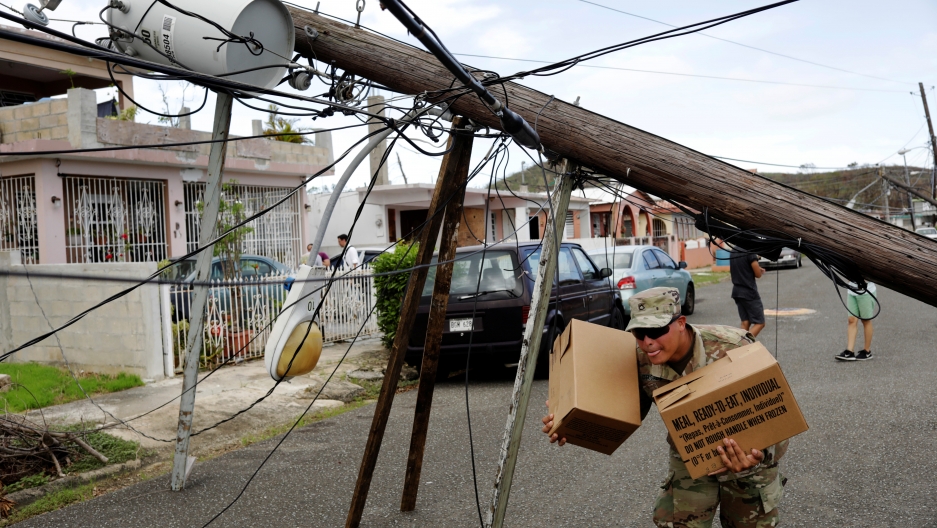 A member of the Puerto Rican National Guard dodges downed power cables as he hands out food and water to a neighborhood following Hurricane Maria in Ceiba.

Typically, power companies rely on “mutual aid” agreements with other utilities following natural disasters — both Texas and Florida recently activated those agreements to help residents get power back.

But the Puerto Rico Electric Power Authority, or PREPA, has opted out and hired a tiny contracting firm from Montana instead.

“PREPA couldn't afford it,” says David Ferris, a reporter for E&E News. The agency is $9 billion in debt, and mutual aid agreements are expensive to repay.

“There were other companies offering to do the work,” says Ferris "but because of PREPA’s perilous financial situation, those other parties wouldn’t necessarily just jump in. But Whitefish was ready to.”

PREPA’s decision to hire Whitefish Energy is unusual, and drawing some scrutiny. The for-profit company had just two full-time employees when Hurricane Maria made landfall, and is based in US Interior Secretary Ryan Zinke’s hometown in Montana.

“You have a small, untested power company going in to help a desperate, bankrupt utility,” says Ferris. “We simply don't know what that's going to look like or how long it's going to take.”

To hear more from David Ferris about Whitefish Energy listen above.