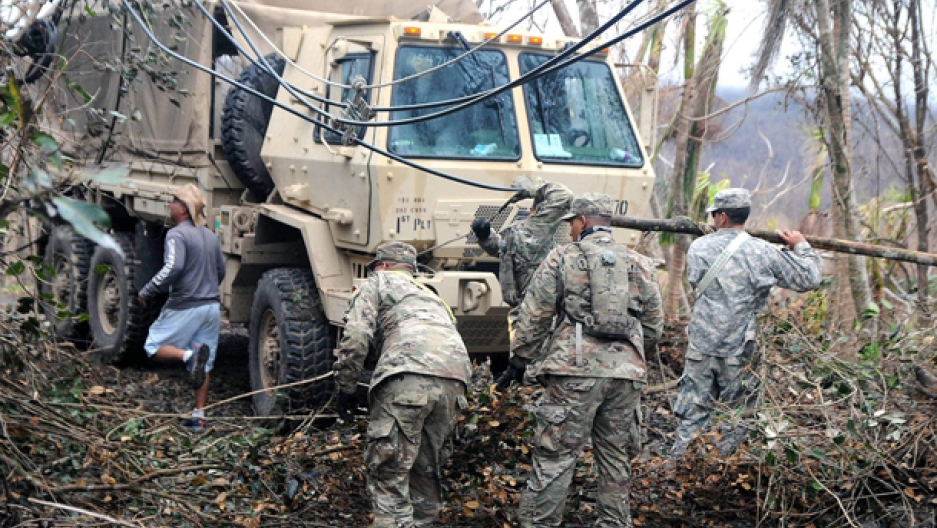 Citizen soldiers of the Puerto Rico Army National Guard, alongside residents of the municipality of Cayey, clear downed power lines and other debris left by Hurricane Maria.

Winds from Hurricane Maria ripped Puerto Rico’s electric power grid apart, twisting it into a tangle of more than 30,000 miles of downed power and transmission lines. Since it all has to be rebuilt anyway, says Robert Engelman, a senior fellow at Worldwatch Institute, now is the time to boost renewables and convert the island’s power system to more local mini-grids and microgrids.

“Puerto Rico, like the rest of the Caribbean, has enormous renewable energy resources right there on the island,” Engleman says. “The sunshine is more than just a draw for tourists. ... The power of solar irradiance to generate solar electricity is twice as strong [there] as it is in Germany or Denmark, which have the bulk of solar power that's installed in the world as a whole.”

The same is true for wind, Engleman adds. Trade winds blow across the Caribbean at speeds of 10 to 30 miles per hour almost constantly. Wind farms can also potentially be more resilient in the face of major storms than traditional fossil fuel energy production. Puerto Rico has the largest wind farm in the Caribbean, and it survived the hurricane intact, Engelman points out.

Some smaller wind farms suffered damage “because the rotors didn't close down the way they were supposed to in high winds,” Engleman says, adding “so it’s not to say that it’s perfectly resilient.” The best wind turbines are built to withstand about a Category 3 hurricane, and Puerto Rico got hit by a Category 4 hurricane, so improvements will be necessary.

“This is not a binary situation in which renewable is completely resilient and non-renewable is totally vulnerable, but, I would say that renewable has big advantages,” Engleman maintains. “You don't have to worry about having port facilities to import your fuels. It's going to be an issue for Puerto Rico whether it can import the fossil fuels it needs, given its port situations."

Engleman also sees an opportunity for Puerto Rico to rethink how it distributes power on the island. He recommends creating a system in which “electricity could flow through flexible community grids based on locally harvested wind and solar energy.”

Smaller grids can often be "smarter" and more responsive to their users, he says. “They frequently involve more public participation [and] community decisions about pricing and fuel mix. Communities might be more enthusiastic, for example, about using renewable energy than importing new fossil fuels.”

Engleman believes the US should undertake a “collective national effort to look at Puerto Rico, both for the benefits of its own citizens and the benefit of the country as a whole, as a kind of a laboratory for how to make renewable energy work.”

He suggests creating federal/private partnerships that can take on some of the large upfront costs of building out a renewable energy system. This would not be a "bailout," but a "way of learning from what we can do on one island with 3.4 million Americans: How it can become self-sufficient in energy and resilient in energy and resilient against the kind of superstorms that are very likely to be hitting Puerto Rico in the coming decades.”