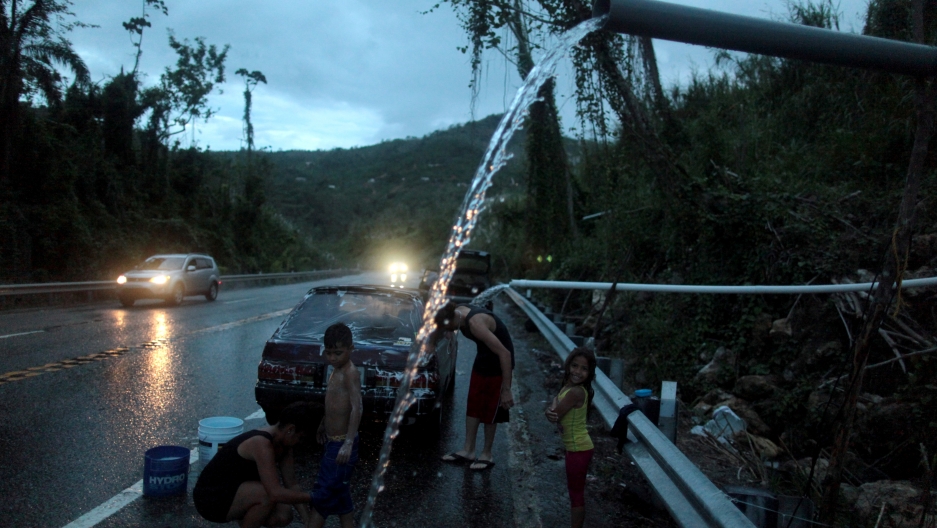 A family bathe and wash their car with mountain spring water after hurricane Maria hit the area in September, in Utuado, Puerto Rico.

Everyday life in Puerto Rico these days — in the still-ragged aftermath of Hurricane Maria, two months ago — is a test of patience, even for the middle class.

Few traffic lights function and that slows commutes to a crawl. Electricity is sporadic, so stocking the fridge remains a risky proposition.

"You get tired of eating cold stuff, or eating things in a can, or not being able even to have a warm bath," says marketing executive Edmaris Carazo. She was born and raised in Puerto Rico and writes the blog Siempre Jueves. "It's the little things that you miss the most."

Carazo has written about her frustrations about daily life in Puerto Rico in the online magazine "Catapult."

As I write this, it's been three weeks since my not-so-new-anymore-spouse, my two dogs and I quartered ourselves in the middle of a hallway. Barely a month since the roar that violently entered through our doors and windows-a long, persistent roar that tormented us for hours; a roar that was followed by a profound and desolating silence. A silence that was filled by an AM radio station. An AM radio station that only narrated bad news. Bad news delivered by voices that didn't know where their aunt, their cousin, their grandson, or their grandma were. People that cried for their hearing-impaired, blind, and disabled family members. Human beings begging those who lived near the ocean, or on the side of a river, or at the foot of the mountain to please report themselves. And then the wrath of the wind was replaced by the cruel whisper of the unknown.

They say that after twenty-one days, anything you do can become a habit, a part of you. I think that's why we are only now starting to realize that this actually happened to us.

I lived almost four years with my not-so-new-anymore-spouse before marrying him, and in that time I managed to create a fantasy where I didn't go to the bathroom, making him believe that I'm either a princess or a perfect robot. Now I have to announce the purposes of my visit if I go to the toilet, if I have to flush it. I've had to overcome humiliation. I've tried to convince myself that I'm on a camping trip, one of those camping trips I never liked before, but this time it's an indefinite camping between concrete and cement walls-camping without an ocean view, without the salty breeze that refreshes, without the sweetness of a make-believe holiday.

I once traveled for two weeks and I woke up in five different cities. It's always been simple for me to get used to changes, so when I woke up sweaty, overheated, I thought I was in another new city-but it wasn't the case. I woke up in my house, in my living room; we had to move the mattress because the heat in our bedroom is hellish since it happened. I woke up in my own country, the island that has always been hard for me to love, and it smelled like bags that have been in the trash cans for eleven days, like toilets that are flushed only after three or four pisses. It smelled like bodies that are bathed with buckets; like our beach cooler that used to have butter, milk, cheese, and ham, and was already out of ice, giving off a smell of profound putrefaction. Nevertheless, we can't dispose of it, since any liquid now is toilet-flushing fuel.

I once took a screenplay workshop with a professor who told us that he flushed the toilet every time he took a shower. He wasted water without any remorse, approximately three to seven gallons depending on the model, because the sound of the toilet caused a weird sensation of closure and satisfaction for him. I can't help but wonder if today he throws the buckets of rainwater into the bowl, just to preserve any sense of normalcy after what happened to us.

Listen to an interview with Carazo above, and read the rest of her blog post at the online magazine Catapult.