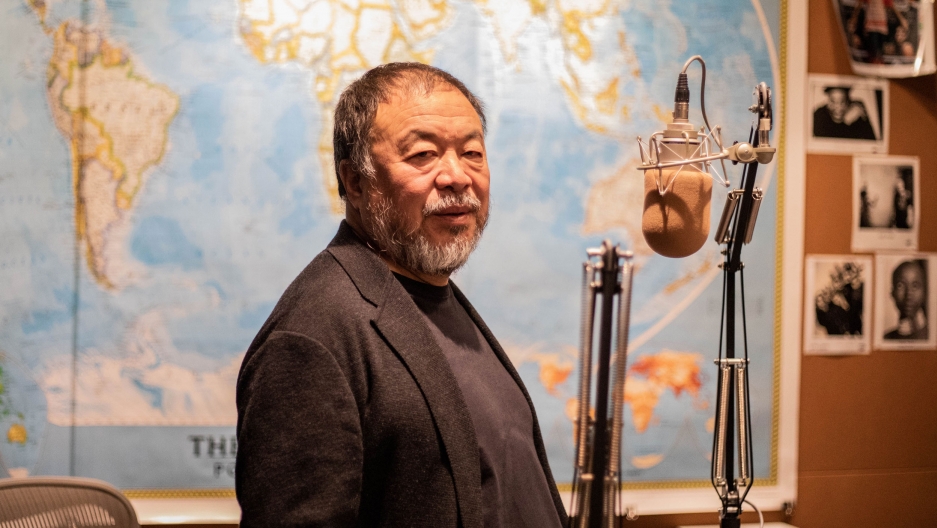 Chinese artist and activist in The World studio in Boston, Massachusetts, during an interview on Oct. 26, 2018.

Beijing on Tuesday unveiled a new national security law for Hong Kong that will punish crimes of secession, subversion, terrorism and collusion with foreign forces with up to life in prison, heralding a more authoritarian era for China's freest city.

China's parliament passed the detailed legislation earlier on Tuesday, giving Beijing sweeping powers and setting the stage for radical changes to Hong Kong's way of life. Beijing had kept full details shrouded in secrecy, giving Hong Kong's 7.5 million people no time to digest the complex legislation before it entered into force at 11 p.m. on June 30.

The timing was seen as a symbolic humiliation for Britain, coming just an hour before the 23rd anniversary of when Hong Kong's last colonial governor, Chris Patten, a staunch critic of the new national security law, tearfully handed back Hong Kong to Chinese rule.

Amid fears the law will crush the city's freedoms, prominent activist Joshua Wong's Demosisto and other pro-democracy groups said they would dissolve.

The legislation pushes Beijing further along a collision course with the United States, Britain and other Western governments, which have said it erodes the high degree of autonomy the city was granted at its July 1, 1997, handover. Britain and some two dozen Western countries urged China to reconsider the law, saying Beijing must preserve the right to assembly and free press.

"This is probably the last nail of the coffin. This is mad," Ai Weiwei, China's most celebrated contemporary artist and a leading dissident, told The World. "China ruthlessly just put its own law on Hong Kong. They don't care [how] the West or the US or Europe, [how] they will respond to a situation like that."

"This is probably the last nail of the coffin. This is mad."

Ai Weiwei spoke to The World's Marco Werman from Berlin.

Marco Werman: When you say this is the last nail in the coffin, what do you think that's going to mean for the people of Hong Kong? How they live day-to-day?

Ai Weiwei: They will become another city of China and they can secretly detain people ... they can be disappeared, and there is no argument in any judicial cases. So, of course, the rich people or the people who can afford it, they will [emigrate] to other locations. But the young people, the poor people, they will all stay there.

In the current system — "one country, two systems" — how do you understand Beijing's attitude toward Hong Kong's pro-democracy movement? Why do they see it as such a threat if there are these two systems?

Actually, nobody really understands. I think, if you look at the long strategy, China always had their own vision about Hong Kong and Taiwan. I think it's not really just about Hong Kong, but rather to really sending out the signal to Taiwan to say — they also think Taiwan is part of China. And I think that Taiwan is next.

Ai Weiwei, given that this very high-profile pro-democracy organization Demosisto has ceased all operations, I'm just wondering, what advice would you give to pro-democracy activists in Hong Kong right now?

It is very dangerous. Today, core players already signed out. Many people are going to go underground. But the fight will always be there.

If this pro-democracy activist goes underground, though, isn't that essentially the end of the movement and the security law essentially puts China in charge in Hong Kong?

Basically, it's like that. It's [a] very sad story. You see how heroically last a year, millions of people walk[ed] on the street peacefully and demand[ed] some very small change. But now those demands, the five demands have been made to — you know — they [Beijing] just, they are so arrogant to me, they never learn. I don't know what to say.

[The five key demands of Hong Kong protesters demonstrating in 2019 included the withdrawal of a proposed extradition bill, the establishment of a commission of inquiry into alleged police brutality and misconduct, the release of arrested protesters, a retraction of the classification of the protests as "riots," and the resignation of Hong Kong chief executive Carrie Lam.]

Ai Weiwei, your fight for democracy is also the long game. How are you feeling today?

I feel pretty sad. I feel the sky getting dark, and I feel Hong Kong is really very symbolic. [It] is the only possible Chinese world which has democracy; very professional, well-trained, young people there and they are very innocent. But the world, not only China, will punish them, but the world will also abandon Hong Kong. So that is a very, very sad story.