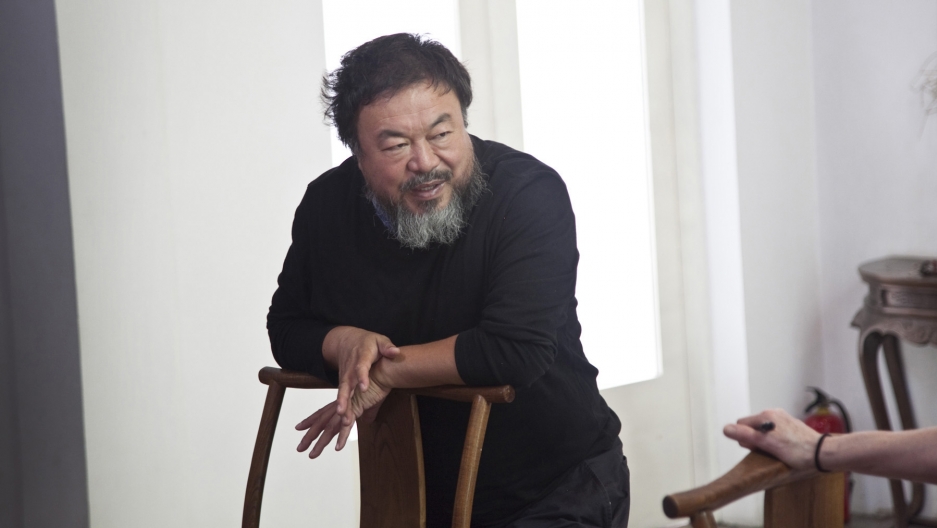 Ai Weiwei stands at his studio in Beijing, June 2014
Credit:

Normally, when visitors head to Alcatraz, they rush off the boat to see the infamous crumbling prison, a ghostly place with guard towers that these days watch no one.

But for the next few months, things are different here.

Chinese artist Ai Weiwei, also one of the world’s most famous dissidents, just opened a massive show on the island. The self-described “remote-control artist” created it from abroad, while under house arrest in Beijing because of his open criticism of China’s government.

Cheryl Haines collaborated closely with Ai to make the show happen, zipping back and forth from Beijing to understand the artist’s vision.

“The pieces just fly in these spaces,” Haines told a group of visitors to the exhibit recently. “Well, I’ll let you see for yourselves, I’m slightly biased of course.”

The show starts with a giant, floating Chinese paper dragon that snakes through a cavernous room. It’s made up of kites in bright blues, greens and reds. Some are inscribed with quotes from well-known dissidents, including one from Ai himself that reads: “Every one of us is a potential convict.”

In another hall, 1.2 million tiny Lego bricks carpet the floor, creating 176 portraits of political prisoners past and present. Martin Luther King Jr. is next to the Tibetan singer Lolo and Edward Snowden.

Greg Moore, president of the Golden Gate National Parks Conservancy, which helped organize the show, said the art asks uneasy questions. “What does it mean to be a threat to society? What is a political prisoner? Whose freedom of expression do we constrain and why?” Moore asks.

Moore also hopes Ai’s exhibit will make Alcatraz known as something more than just the place that once housed Al Capone.

“Everyone knows that Alcatraz was a place of incarceration,” Moore said. “What many people don’t know is that throughout its history there were political prisoners that were detained here, as well as criminals.”

Ai has piped Hopi songs into parts of the prison once used as psychiatric observation rooms.

In the main cellblock, 12 concrete cells echo with the voices of political prisoners (all were selected by Ai himself and from a list compiled by Amnesty International).

Visitors can enter each cell, sit on stainless steel stools, and listen.

In one cell, the voice of Martin Luther King’s Jr.’s anti-Vietnam speech in 1967 bounces off the concrete walls.

In another cell, the late and once jailed Iranian poet Ahmad Shamlou is heard reciting his poetry.

There are also the joyous sounds of The Robben Island Singers, named after South Africa’s infamous island prison, known for being the destination of many anti-apartheid activists, including Nelson Mandela.

In the last cell, you hear the screams and shouts of Pussy Riot, the Russian punk rock band.

Haines said these sounds break the silence that prisoners endure, silence Ai knows firsthand, getting tossed in and out of Chinese jails.

“He felt like he was forgotten because there was no communication with the outside world,” Haines said. “He didn’t hear from his friends or his family or colleagues.”

It is that feeling of isolation that leads to the show’s final piece. Stacks of postcards are organized on wooden racks, each one addressed to a different political prisoner around the world. Visitors can write a message and drop the postcard in old prison laundry baskets to be mailed by the curators.

Whether they will ultimately reach prisoners’ hands is unknown.

A previous version of this story incorrectly referred to the Hopi audio being piped into the prison as chants. They are songs.