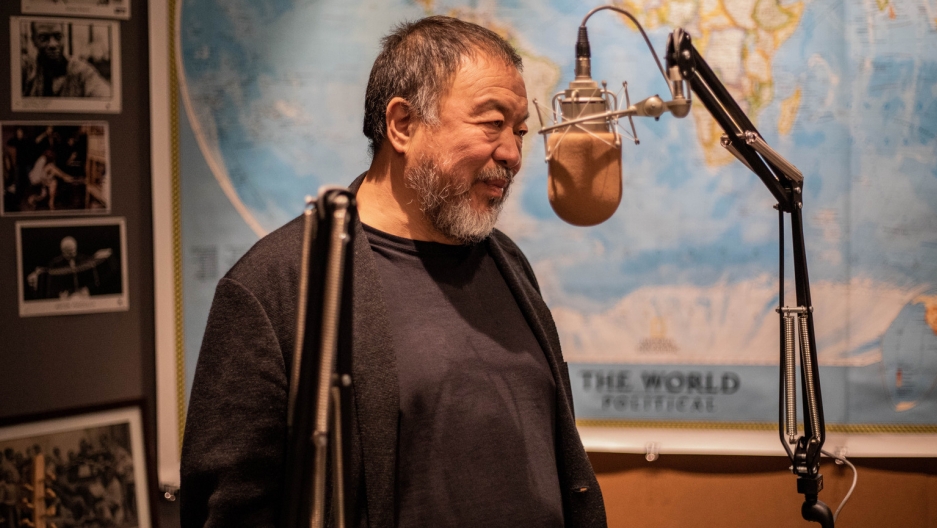 As Chinese dissident artist Ai Weiwei prepares to move back to New York City, a place he once called home, he wonders if America's heart has grown smaller since President Donald Trump took office.

Weiwei's newest book revisits the the mid-'90s, when Weiwei worked in relative obscurity in Beijing and New York City before he made a name for himself as a contemporary artist.

Weiwei sees that time as an important "season" in his life. His new book of photos called, "Ai Weiwei: Beijing Photographs 1993–2003" captures that time. In several photos, he documents the final days of his father, Ai Qing.

The World's Marco Werman sat down with Weiwei in studio to talk about his latest book.

Today was not a regular Friday. It’s not every day that Ai Weiwei @aiww comes to our studio. Besides talking to @marcowerman about art and activism, there was a candid moment, or should we call it ‘selfie moment’? Our multimedia editor @stevendavy captured the sequence with a couple of photos. Selfie by @aiww. Will you tune in for this interview on Monday? #selfie

Marco Werman: At one point [in these photographs], I saw an IV drip going into an arm and then slowly it becomes apparent that you're documenting the hospitalization and the dying of your father, Ai Qing. He was among China's finest modern poets. What was it like taking hundreds of photographs of your father in the hospital during those final days?

My father belongs to the first generation of revolutionaries.  And [those were] the last days of his time. For me, psychologically, I'm waiting for him to pass away. And after he passed away, I feel … you feel you're alone and that you don't belong to anybody. And maybe that's a moment you want to act. So that really psychologically prepared me to become the new boss of myself.

A new boss of yourself?

Tell us a story of the preparations for his memorial after your father died in 1996 — because Chinese officials had their own ideas about how that event should really unfold, right?

Yes, it’s a communist society and has a clear hierarchy. It shows the social status the Communist Party would have given him. He was being kicked out from the Communist Party. He was the same generation as state leaders Chairman Mao — they were together — but he was heavily criticized as a “rightist” and somewhat against the party.

So, your father was in that inner circle with Mao?

Oh yeah, they were really the core which supported the revolution — or part of the revolution. But later, of course, he’d been crushed by the entire revolution and kicked out from the party and spent about 20 years in exile and not allowed to write ... his name totally disappeared from the public.

So how did Chinese authorities decide to hold his memorial service?

First, they decided his body had to be covered by the communist flag. It's a very high honor and that means you're a part of the revolution. Not many people [are] covered by that flag. But I feel completely uncomfortable. I said, "You shouldn't do something to somebody who has already passed away and which, to me, [was] against his will." So I made that argument. I said, "We don't need that flag."

Yeah. They told me, “Your father doesn’t just belong to your family,” which is a very good argument. They say everything belongs to the Communist Party or state.

Was it a convincing argument?

No, it's not. For me, it’s insulting to someone who’s suffered so much, and then being covered by that piece of red blanket. It's that hammer and sickle. For me, it’s brutal. It hurts me.

And then there were the flowers?

They all use the same set of paper flowers, you know? Someone uses them and then the next day or a week later, somebody dies, it’s the same. When I walked into the room I felt no, we don't need to use anything that’s been used before. So they said, “What are you going to do?” I said, "I will buy fresh flowers." My father is a poet, he’s an artist, his life related so much to the highest aesthetic judgment and moral judgment. I said, "I have to change it." We sent out our people to buy all the white flowers in Beijing. We made a fresh flower bed so he can sleep in the middle but still covered by this red blanket.

It's not really so much ... ideas, it’s really an attitude or some kind of stupid, ridiculous action. You see a child do that kind of thing all the time.

Was your intention to shake up the Chinese public?

No, it's not possible. You have no platform [in China]. The rest of society is in a deep sleep and they don't care.

It was interesting, something you said about smashing the vase. You felt it was almost like a child acting out. I want to ask you about the middle finger because it's a photographic motif that you've used: pointing your finger at the Hong Kong skyline, pointing a middle finger at the Eiffel Tower, Chairman Mao. It’s like a rebellious teenager who has just gotten a camera for the first time. What is up with the finger?

It’s just sort of the rebellious teenager. I don't do that anymore because I may have grown older. As individuals in this society, what else can you do? I mean, just give out your opinions?

You spent a lot of time in the United States. Do you feel you can still count on the US to be kind of the beacon of free expression around the world?

I don't really think that way. On the shallow surface, yes, the US is defending individual rights or human rights. But the US is also deeply causing a lot of problems for other people, for other nations [in terms of] broader human rights violations.

You live in Berlin but I understand you're moving to New York with your family?

You've described the US as a country of immigrants, which I think a lot of people would agree with, but President Donald Trump seems to reject that idea. How do you feel about this reality as you are about to move to the US?

I think the reality is does the US as a nation still have the power to accept differences, [does it] still have the energy or feel young enough to take that challenge and have a vision and have a big heart. If they don't, then they become more exclusive. They will push people away. They'll blame other people and it just shows the weakness.

If that big heart starts to shrink while you're here, are you going to turn your eye and your critiques toward the United States or at least make your critiques in your art of China more universal?

I always protect the basic rights of freedom of speech and human rights. I don't see that only as a Chinese problem, it’s a universal problem.