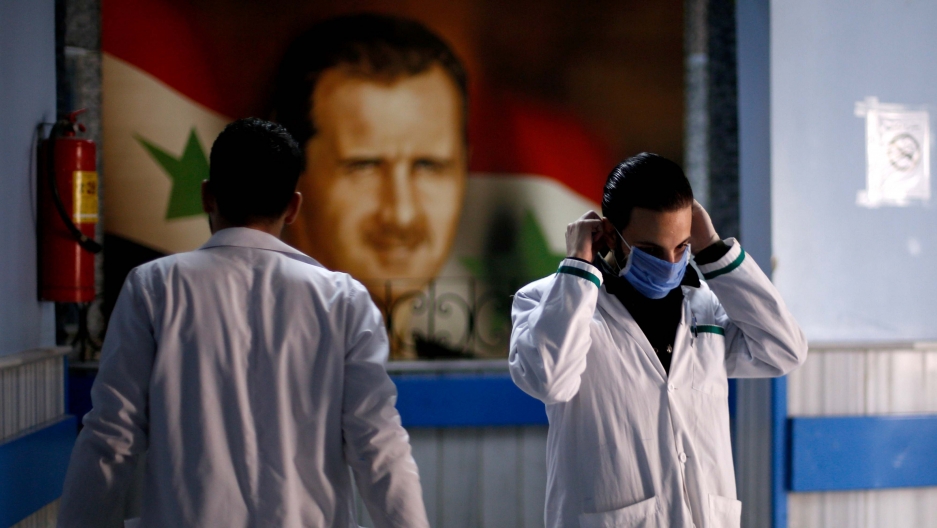 A health worker with a face mask walks inside a hospital, as hospitals enforce a series of measures to prevent the spread of the coronavirus disease (COVID-19), in Damascus, Syria, March 19, 2020.

The spread of the coronavirus is scary everywhere. But in Syria, which has faced war for more than nine years, humanitarian aid and health care is already stretched razor-thin.

Syria on Wednesday implemented a nationwide curfew from 6 p.m. to 6 a.m. as lockdown measures to counter the spread of coronavirus were extended, according to residents and state media.

The government had already ordered the closure of shops, markets and public transport, allowing only pharmacies to remain open and limited deliveries of bread to prevent crowding near bakeries.

Opposition figures and independent politicians point to Damascus' strong ties with Iran, the worst affected country in the region, as a source of possible contagion.

They say the virus in Syria has spread from some members of Iranian-backed militias who are fighting alongside the Syrian army. Iran has a huge presence in Syria, with thousands of militiamen who control large areas and towns.

David Miliband is the head of the International Rescue Committee, which has been providing humanitarian assistance inside Syria since 2011. He spoke with The World's Marco Werman about efforts to prevent and treat the novel coronavirus in a war zone.

Marco Werman: David, what concerns you most about the spread of COVID-19 in Syria?

David Miliband: Well COVID-19 is obviously a threat in advanced, industrialized societies where there is extensive public health and health infrastructure. Just imagine what it's going to be like in a country that is ravaged by war. In the northwest of Syria, 85 hospitals have been bombed in the course of the last year during that war. And so we're talking about a highly densely populated population — even higher density than the 25,000 people per square mile that is the case in New York — highly densely populated population with very little public health infrastructure. We know that a million people have been displaced from their homes by the fighting over the last three months alone. And so people are living in tents, under trees, even in the cold — conditions that still currently operate inside Syria. And we know that if they do get sick, the public health infrastructure is very weak indeed. So we're doing everything we can to use our expertise in infection prevention and control to prevent this becoming a rampage across the country.

I mean, it is a potentially terrifying situation. Which parts of Syria has it already reached?

So we're working in the northwest and in the northeast — that is the northwest Idlib province, about 3.5 million people there, in the northeast, two provinces there, about 4 million people. We don't yet have a recorded case — I emphasize recorded. The case that the United Nations reported earlier this week was in eastern Damascus. That's a government-controlled area. And obviously, there's a grave concern that there is movement across the Iraq-Syria border. I know that Turkey is very concerned about movement across the northern border. And we know that Iran has suffered grievously from the spread of the disease. But we really think that if there is the gift of time, we've got to use it to try and get the preventative measures in place.

Well, most supplies to combat COVID-19, have reportedly been sent to government-controlled areas of Syria. So how does that impact northeast Syria? And how concerned are you that the supplies will actually reach their destination?

You're absolutely right that the relationship of the United Nations is with the government of Syria, which controls the other parts of the country. The supplies that go across the line from government-held to rebel-held areas is virtually nonexistent. We know that from the United Nations report. We also know that cross-border supplies are now being interfered with because the number of cross-border checkpoints has been reduced from four to two. There remains UN crossings in the northwest of the country from Turkey into Syria. And it's essential that they are properly used. So we are deeply concerned.

We're desperately trying to get supplies in, not just to protect our staff, but to protect the people that we serve. That's why we've launched our own appeal, because we cannot rely on the money that's going into the official channels. We've got to make sure that the people on the ground, the nongovernmental organizations like us, that they've got the supplies that they need to do their jobs. And 400 Syrian staff that we've got are recruited locally in the warzones and refugee-hosting countries where we work. So people are defending their own communities, their own families, as well as their clients.

A ceasefire was announced this week in Syria. What else needs to be prioritized to equip the country against the pandemic?

Well, the top priority is to sustain the ceasefire. The UN Secretary-General Antonio Gutierrez has called for ceasefires in all war zones. Obviously, war is now the main driver of poverty and displacement. A second thing that is absolutely key is to get medical supplies through. At the moment, there are real constraints on that. Third thing, we need to do preventative work to ensure that the population understands from people they trust the measures that they need to take. And then we're into the same syndrome that exists in this country.