The decree gave the country's 1.3 billion people just hours to prepare for 21 days indoors as crowds rushed to stock up on provisions after Modi's announcement.

Though Modi said access to essentials, like groceries, would be available, the police have cracked down on seemingly sanctioned buisnesses and beaten people breaking lockdown measures. Violators could face jail time or a fine for leaving their homes during lockdown.

India is reporting just over 600 confirmed cases of COVID-19, but that is almost certainly due to the lack of testing.

A conservative estimate of the true number could be five or six times as high, said Rupam Bhattacharyya, a PhD student at University of Michigan's Department of Biostatistics. He is part of an interdisciplinary group of researchers looking at the pandemic in India, including estimating the virus' spread.

“If you see how the data has grown, it's pretty clear that there's an exponential growth that's happening even with the low levels of testing. So, now if we have more tests, then surely that number is going to increase,” Bhattacharyya told The World. 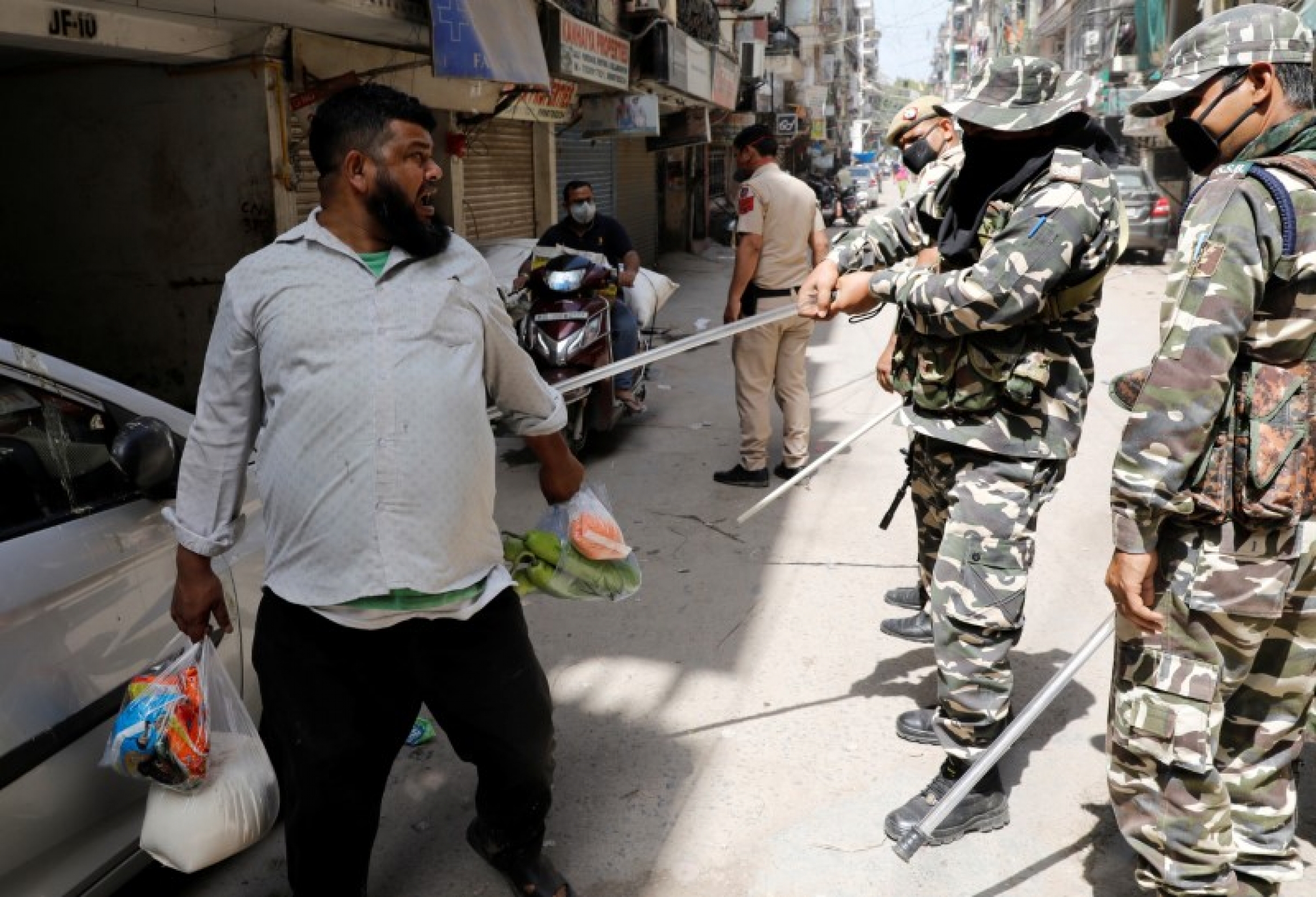 Police officers wield their batons against a man as a punishment for breaking the lockdown rules after India ordered a 21-day nationwide lockdown to limit the spreading of coronavirus disease (COVID-19), in New Delhi, India, March 25, 2020.

Requisitioning beds in private hospitals, which the government has leeway to do, says Desiraju, could offer additional resources.

“If a tough decision is taken to take over beds in private hospitals, we would have substantially more than we do now. There are huge private hospitals,” Desiraju said. “I think that decision will need to be made. Because if we didn't do this, a very large number of poor people would simply not have access to treatment.”

Modi acknowledged that the lockdown would be “a very difficult time for poor people,” but did not immediately announce any concrete assistance measures.

According to the International Labour Organization, 90% of India's entire workforce is informal, meaning millions are without any social insurance and live paycheck to paycheck on a daily basis.

“There is a huge informal sector — people who work for daily wages. What they eat tonight depends on what they've earned during the day,” Desiraju said. “Now, across India, cities and towns, people like this have been thrown out of work. … The government has given instructions and that people should be paid, even if they are being laid off work. But I don't know this is happening because there is a lot of movement back to the villages that is being reported. So, it's a bit of a mess.”

The government is considering an economic stimulus package of more than $19 billion to fight the downturn, two sources told Reuters, and some localities have issued additional support for those needing social services.

"Asking people to stay at home is necessary, but the majority of the population can't afford to sit at home without work and pay," said Madhura Swaminathan at the Indian Statistical Institute in Bengaluru.

Modi issued the lockdown after evidence indicated COVID-19 was moving from cities into small towns and villages. As transportation services are cut during the lockdown, some stranded hundreds of miles from their villages have begun walking home. 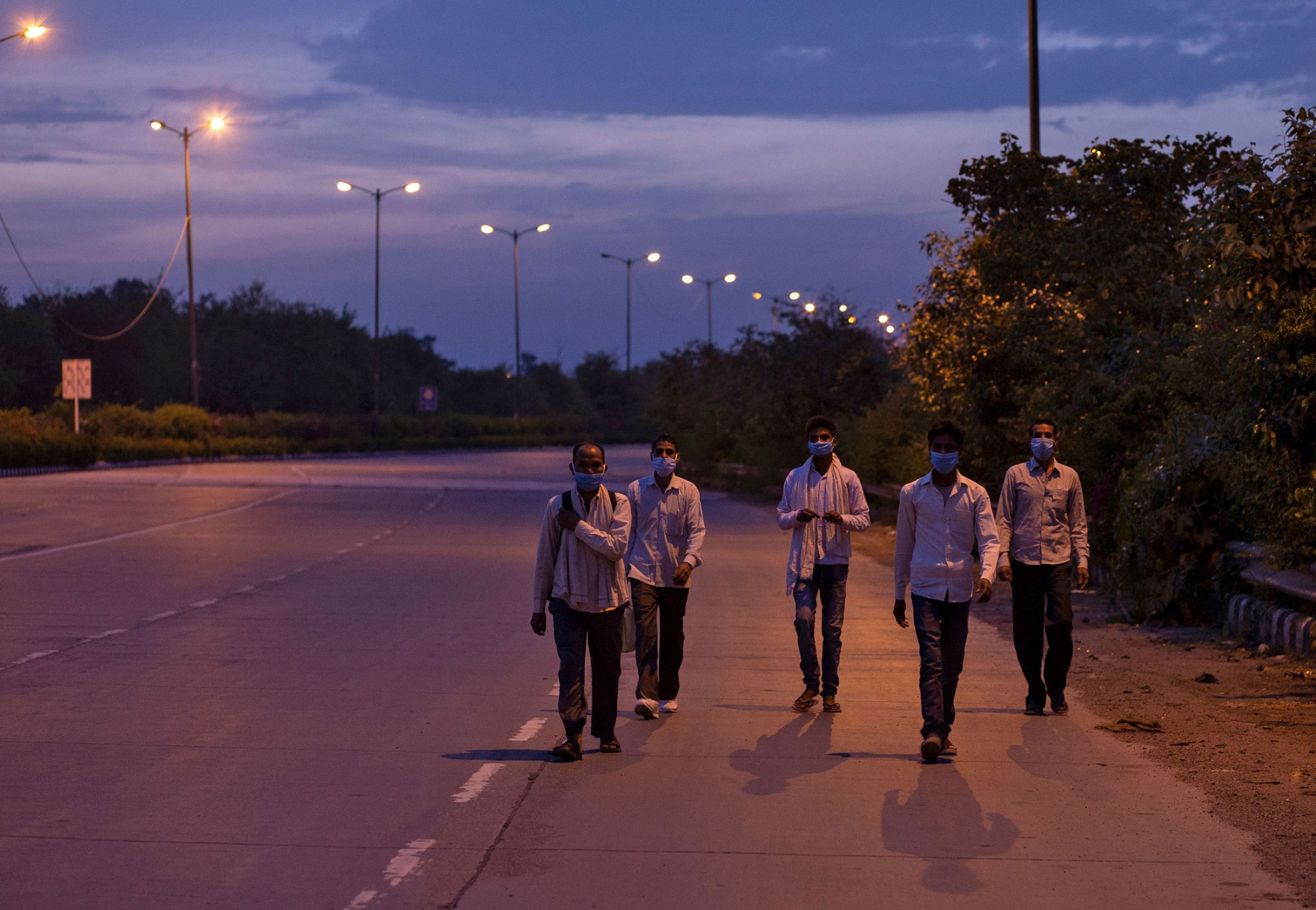 Migrant workers walk along a road to return to their villages, during a 21-day nationwide lockdown to limit the spreading of coronavirus disease (COVID-19), in New Delhi, India, March 25, 2020.

“There are a lot of people in the villages and small towns of India who have jobs in the bigger cities. So, they have to commute. They go out in the morning, stay for the entire day in the city, do their daily work and then come back to their own town at night,” Bhattacharyya said. “So, what happens is, say 'person A' goes from a small town to a city, gets the virus, comes back to the small town and then transfers the virus to someone else. And then that chain essentially continues.”

Bhattacharyya said the lockdown was “essential” and a “prudent decision,” but without more support for India's daily earners, it risks failure.

“Just the lockdown alone is not going to work unless you make sure that people are not really going outside their homes and are actually abiding by the lockdown,” Bhattacharyya said. “If you see the proportion of people who live below [the] poverty line, who has to get government aid and stuff like that — that proportion is really large. So, unless the government actually does something about that, the lockdown is going to fail.”

“Completely independent of this discussion on the pandemic — for years, people have been saying that India has not been investing enough in the health sector,” Desiraju said. “So, everyone knows that we have not invested enough in strengthening public structures, which is why there is this very strong feeling that at a time of crisis, though Indians have a capacity to cope and Indians have a capacity to rally around in some manner, it's going to be very hard. It's hard enough for people who are at homes under lockdown. It's much more difficult for doctors and nurses who are at the front line.”

To hear Desiraju's full interview with The World, click the audio player above.