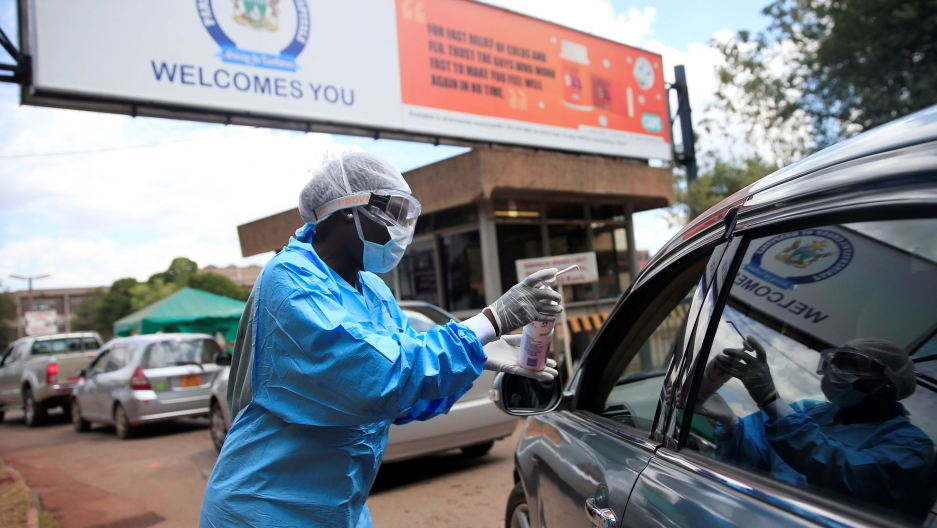 A health worker screens and sanitises visitors to prevent the spread of coronavirus disease (COVID-19) outside a hospital in Harare, Zimbabwe March 26, 2020.

Nurses and doctors are on strike in Zimbabwe. They say the government has failed to respond to their demands for personal protective equipment as they brace for a battle against the novel coronavirus.

Customs officials at the country's biggest airport have also stopped reporting for work, fearing exposure to the coronavirus and a lack of measures to prevent its spread, their union said.

"Our members think the government is not taking them seriously. We can't afford to lose nurses to this serious pandemic," said Enoch Dongo, secretary-general of the 18,000-member Zimbabwe Nurses Association.

The Zimbabwean government says there are five cases of the coronavirus in the country right now. A popular 30-year-old Zimbabwean broadcast journalist was the first to die from the disease — gripping the nation with grief and concern.

Zimbabwe will impose a nationwide lockdown for 21 days from Monday to help curb the spread of coronavirus, President Emmerson Mnangagwa said on Friday. Only state and health workers will be exempted.

Facing its worst economic crisis in a decade, Zimbabwe is grappling with soaring inflation and shortages of foreign currency and medicines that has crippled its hospitals. The country has begun receiving some of the protective and medical equipment donated to African countries by Chinese billionaire and Alibaba co-founder Jack Ma.

But health care workers' strikes are not new in the country. Dr. Fortune Nyamande is the chair of the Zimbabwe Association of Doctors for Human Rights. He says doctors and nurses have been striking for some five years as they are faced with insufficient resources to do their work — and the situation is only getting more and more complicated.

"A doctor who is working in a government hospital in Zimbabwe is earning around $100 to $150 US dollars per month. A nurse is earning an equivalent of about $50 to $75 US dollars per month. So this is not enough to sustain their families," Nyamande said. "We have seen nurses going to work maybe three times a week where they do not have access to gloves, masks, sanitizers. The general infrastructure in the public hospitals across Zimbabwe is dilapidated and it's pathetic. So it's really a very complicated working environment for any health worker — doctors, nurses included — to discharge their duties effectively."

Nayamande spoke with The World's host Marco Werman about the longstanding pressures health care workers in Zimbabwe face, and the situation in the midst of the COVID-19 pandemic.

Marco Werman: When Zimbabwe's president was elected in 2018, it sparked protests across the country. What followed were reports of severe human rights violations, death, sexual violence by government forces. Your group, the Zimbabwean Association Doctors for Human Rights, advocates for the right to health for all Zimbabweans, including activists. Have you been personally targeted by the government?

Dr. Fortune Nyamande: Yes. It's a very sad situation for us, particularly myself as an individual and also our organization, [of] which I am the chairperson. We've been the subject of state brutality. We've been subject of attacks in the state-run media. We've been subject of ridicule, very serious threats by the president of the country, where he said that he is going to unleash the security forces to come on to us. And at times, we've even had to run away out of the country for the fear of our own lives. So it's very difficult to be a human rights doctor in Zimbabwe. But at the same time, we still find motivation in the work that we do. Because we support human rights defenders across the country so that they continue to advocate for just and political reforms in Zimbabwe.

Doctor, where are you counting on hope and support for Zimbabwe as the coronavirus situation there gets worse?

Zimbabwe has been a country which has been plagued by communicable diseases over quite a long period of time. We've had a cholera outbreak, we've had a devastating typhoid outbreak, and we've got also one of the highest prevalence of HIV in the world. We have some inbuilt resilience as a country in terms our well-trained health workers and also the health infrastructure to deal with a communicable disease. But maybe the main challenges now could be — with regards to the motivation of the doctors — the nurses, the doctors, they highlighted that they're not going to continue to [execute] their duties if they're not provided with personal protective equipment and we don't see this being solved anytime soon.

That could be catastrophic.

Sure. Definitely. It could be catastrophic. ...The government and the international community, they should recognize that Zimbabwe — as much as it is not a country in war, but it is a country which I would describe as a fragile state. And it needs extensive support from development partners in the international community to avert a possible pandemic into disaster if COVID-19 happens to come into Zimbabwe at full scale.