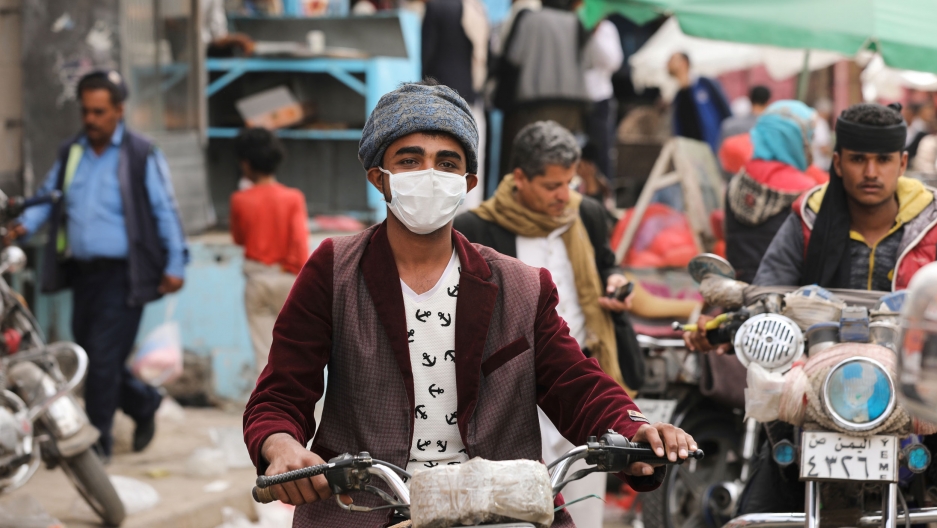 A man wears a protective face mask as he rides a motorcycle amid fears of the spread of the coronavirus disease (COVID-19) in Sanaa, Yemen, March 16, 2020.

Five years after Saudi Arabia entered the war in Yemen with US backing, peace remains elusive.

Still, Yemen's warring parties welcomed a United Nations call for an immediate truce on Thursday. A Saudi-led military coalition said late Wednesday that it backed the Yemeni government's acceptance of the UN appeal. Their foe, the Iran-aligned Houthi movement, welcomed that stance but said it wants to see implementation on the ground.

Cases of COVID-19 have yet to be documented in the impoverished Arabian peninsula nation, where conflict violence has killed more than 100,000 and left millions on the brink of starvation. But as the country enters its sixth year of a conflict that has unleashed a humanitarian crisis, a coronavirus outbreak threatens to make conditions in Yemen worse.

Hisham Al-Omeisy, a Yemeni activist living in exile in Egypt, spoke with The World's host Marco Werman about the war and the threat of the pandemic spreading in Yemen.

Marco Werman: Hisham, thank you very much for being with us again. Remind us why you were taken prisoner three years ago.

Hisham Al-Omeisy: Well, I was taken because I was becoming critical of the Houthis. Previously I was critical of everybody — all the sides in the war — but I focused mostly on the Houthis just before my abduction because of the policies implemented locally, especially in the capital, Sana'a. They weren't too happy about that. So they took me and they forcibly disappeared me for almost six months.

And during that six months, you were in detention. Can you describe that?

I was kept there pretty much in a basement, in a solitary cell, for most of that time. The cell was very small, and it was underground — so that there's no light source — and it's a psychological torture. You lose track of time and you start talking to yourself. And I'll be quite honest with you, there was a time when I contemplated even suicide. Basically, your inner demons attacked you the whole time. It was hell. You basically feel you're being buried alive.

Hisham, you said you had been critical of the Houthis. Remind us who they are, and were you their prisoner, essentially?

Well, the Houthis — they are a marginalized group that a lot of people in Yemen sympathized with. And I did myself. The government waged unfair wars against them. Six wars. And they had a lack of services, lack of health care, lack of government support in their areas, which is why a lot of people sympathized with them. And we welcome them in Sana'a. And then even after what happened to me, after what they did to me — the imprisonment and forcible disappearance, I still hold no grudge against them.

Related: Under lockdown in Spain, hotels transform into field hospitals

How is your family coping? I mean, you were in detention.

Well, yes, I was in detention. But fortunately we have a very nice social fabric in Yemen and the community basically comes together. And we had friends — they started helping my family. I didn't really know what was going on on the outside, but a lot of people, not just in Yemen, even from the UK, from the US, they called my family and they offered help. They offered a lot of help. And I'm very thankful for that.

I know you're not in Yemen, but daily life for the average person in Yemen right now — what's that like? What have you heard? Is there enough food or school still functioning?

Schools have been suspended, and in terms of food, well, there is shortages before even the coronavirus outbreak. Today I was talking to my parents back home in Sana'a and they said that there's even more shortages now because of the shutting down of all the ports and prices of medicine actually skyrocketed almost threefold.

And that's all a function of the coronavirus outbreak, in addition to the war in Yemen.

In addition to the war, exactly. It just basically exacerbated the situation.

So March 26 marks the fifth anniversary of the first airstrikes by Saudi Arabia in Yemen. But Yemen's been at war even longer than that. What prospects do you see for your country now?

The thing is that in Yemen, the roots of the conflict go way deep. People can trace it back even to 30 years ago. But the thing is that the social fabric has been torn apart. We have lost the central axis for our nation — what defines us. And the problem is a lot of people are so focused on ending the war itself, the conflict — but even if the war, even if the guns stopped tomorrow, it's going to take a while for the internal conflict to end.

And Yemen, if it gets hit by this coronavirus, I suspect that will affect humanitarian assistance as well.

It will. You have to remember that the health care situation is pretty bad. I mean, only 40% of the hospitals are operational, and within those 40%, it's very limited capacity. So if it hits us, it would hit us really hard.

More: COVID-19: The latest from The World

Well they need to learn from us, to be honest with you. The thing is that we've had shortages. We've had epidemics. We've had the war. The airstrikes and anything else that basically forced us into our own basements for five years. And there's some lessons to be learned from the Yemeni experience. Now that I'm watching the news and I've seen people turn against each other fighting in grocery stores, and I would like them to see what we did in Yemen. We didn't do that. We didn't panic. There was no mass hysteria. We actually worked together. We learned how to be kinder to each other. We learned that we survive as a community. And that's how we've been able to survive for the past five years. So the world can actually look for lessons from Yemen.