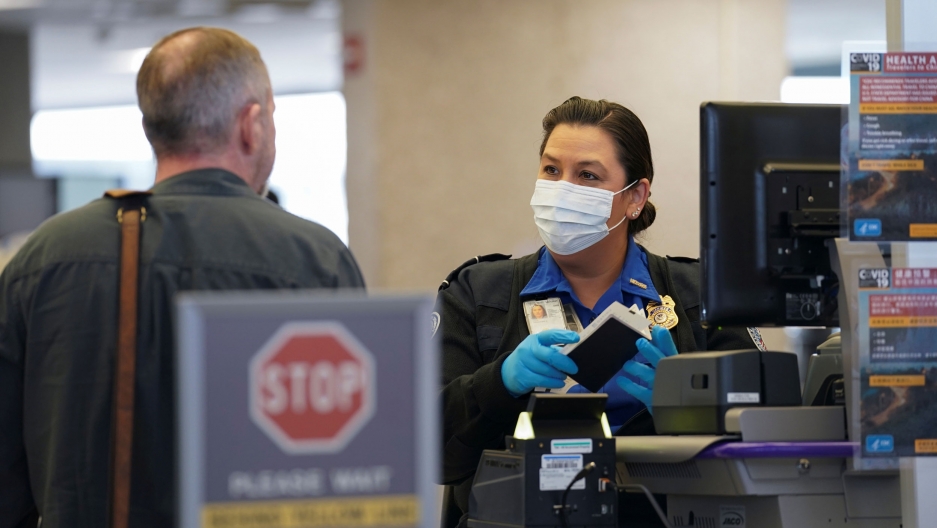 A TSA officer wearing a face mask clears a departing passenger at Dulles International Airport, a day after US President Donald Trump announced travel restrictions on flights from Europe to the United States for 30 days to try to contain the spread of the coronavirus, in Dulles, Virginia, March 12, 2020.

The US lags behind all other developed countries when it comes to sick leave. And when sick people come to work, viruses are harder to contain. By conservative estimates, at least 20 million Americans go to work sick because of a lack of sick leave.

Democrats like New York Sen. Kirsten Gillibrand want more. "We want mandatory paid sick leave for up to two weeks," she told MSNBC Friday. "We also want paid family and medical leave, because if your child's school has shut down, you can't choose between caring for a child and getting a paycheck."

The Democratic-led US House of Representatives will pass a coronavirus economic aid package on Friday, House Speaker Nancy Pelosi said, which would provide for free coronavirus testing and two weeks of paid sick and family leave for those affected by the virus. It was unclear whether President Donald Trump and his fellow Republicans would support it.

Republicans and Democrats have struggled to agree on measures to limit the economic fallout from the pandemic, which has infected 138,000 people worldwide, killed more than 5,000 and shuttered schools, sports arenas, theaters and offices. Trump declared the coronavirus pandemic a national emergency during a news conference Friday afternoon.

Related: Living in lockdown in the Eternal City

Republicans and Democrats are trying to hammer out an agreement on an economic aid package to follow the $8.3 billion Congress approved last week for vaccines and other disease-fighting measures.

The latest Democratic version, which circulated among lobbyists and lawmakers on Friday morning, pulls back an initial proposal that would have created a new, permanent sick-leave benefit for the one-third of US workers who must go without pay if they stay home because they are sick. Republicans called that a dealbreaker.

The new proposal would only provide sick leave during a national emergency.

Dr. Jody Heymann is founding director of the WORLD Policy Analysis Center (WORLD) and dean of the University of California, Los Angeles' Fielding School of Public Health. She spoke with The World's host Marco Werman about America's sick leave policy — or lack thereof — and how it compares with the rest of the planet.

Marco Werman: Dr. Heymann, how does sick leave influence how an illness spreads? Is there a link, and can you make it for us?

Dr. Jody Heymann: Simply put, Americans who have sick leave stay home when they're sick. So, they don't spread disease to their co-workers as often, they don't send their children to school when they're sick, so their kids don't spread it as often and they don't work as service providers. We know that sick leave makes it dramatically less likely that people spread disease. If you don't have sick leave, you're twice as likely to send your child to school or daycare sick. You're 1 1/2 times as likely, even when you feel sick yourself and are contagious to go to work sick.

So, clearly sick leave is dependent on the type of job you have. What do US sick leave policies look like broadly?

So, unfortunately, the situation in the United States right now is that 7 in 10 of our lowest income workers don't have a single day of paid sick leave. So, the people who need it the most have it the least. Of food service workers, 4 out of 5 lack sick leave; 3 out of 4 child care workers lack sick leave. This is a devastating impact on them and their families, but also to everyone they come into contact with.

How concerned are you right now about where this could lead in the United States? Let's start there.

Well, I'm very concerned about what it means this year, and it's something we have to fix for every year. We shouldn't just be fixing it temporarily in 2020. We have to fix it for every year. And there's every reason to believe we can. So, the world has 193 countries, 179 of them have paid sick leave. That's 94%. That's not just the high-income countries. The United States is a complete outlier in lacking all forms of paid sick leave.

So, talk about those other countries. How does sick leave actually work there? Can you point to a country that you think stands out as a model?

Well, I think the good news is there are lots of models there. But what do they have in common, the ones that are working? First, people need to know they will have leave from the very first day they're sick. We can't say you have to be sick for five days before you get paid. By then, infectious diseases will spread. The second thing is we need to make sure that we have paid family leave. So, if your child is sick, you're able to stay home and that child is able to stay home. Canada does this well, but many countries do it well. Australia, as an example, not only provides paid sick leave, they provide it from the very first day of illness so all workers there can afford to take the leave they need. And I think we see some of the countries that have had the worst challenges, don't provide that early sick leave. And this really is one of the most important ways we can slow this epidemic.

This interview has been edited and condensed for clarity. Reuters contributed reporting. Follow The World's coronavirus coverage here.