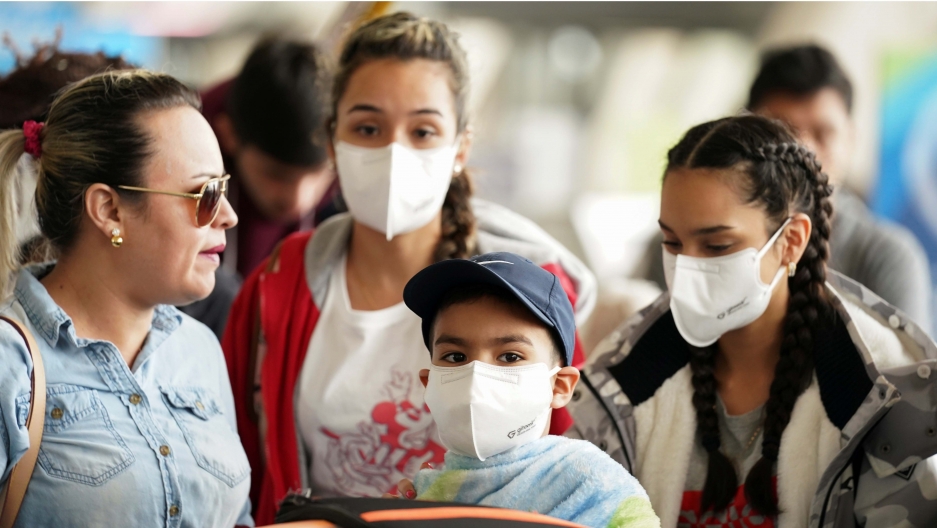 A family wearing face masks queues in a check-in line at Dulles International Airport a day after US President Donald Trump announced travel restrictions on flights from Europe to the United States for 30 days to try to contain the coronavirus, in Dulles, Virginia, on March 12, 2020.

Testing for the coronavirus got off to a slow start in the United States. As of last week, the US had tested fewer than 2,000 people. South Korea had tested almost 190,000.

Production of test kits in the US is ramping up, and more test kits are available — but it's not enough to test every American who may have been exposed.

This week the US learned that a key ingredient of the US tests is not readily available. And some test kits in California are reportedly incomplete.

For more about coronavirus testing, The World turns to Dr. Michael Mina, who teaches epidemiology at the Harvard T. H. Chan School of Public Health. He spoke to The World's host Marco Werman on the need for testing — and how the US health system compares to those of other developed countries.

Marco Werman: Michael, we wanted to ask you about testing for the coronavirus. Let me ask you first, have you been tested?

Dr. Michael Mina: I have not been tested.

And why not? Is it a lack of testing or you don't think you're a priority?

Both. I am not a priority. I would like us to get to a point where we don't have to prioritize people so much. But at the moment, we have a real lack of testing throughout the country, and that is causing us to triage and prioritize only the most urgent cases.

Right. So who are the most urgent cases? Who really needs to be tested?

So the priority right now is going towards people who are inpatients, those people who are in the hospital and have a lot of health care people working around them. We need to know anyone who might be in there who is infected and possibly transmissible.

So the results of one person's test, that's a data point. For individual Americans, what is the value of getting tested?

If we could go to an alternate universe than where we're in right now and test many, many people and screen the population — what this does, this actually causes people to naturally social distance from each other, to understand that, if they know that they're infected, that they will understand that they don't want to get their loved ones or friends infected. And they will naturally start to separate from the population. And this was the approach that South Korea took, and I think it worked very well.

So what is the US testing capacity today? Where are we? We're hearing so many different things.

I think, unfortunately, we are still at less than 10,000 tests [that] can be performed across the United States each day, possibly less than 5,000. It's hard to know exactly who is getting online at what point for testing.

And that is significantly behind other countries, other developed countries. Am I right?

Relative to the size of our population? Yes. I think that we should, for example, have the ability to test, in the United States, as many as 100,000 or more samples per day.

So why was South Korea so successful with testing? And is there any part of that — or all of it — that the United States can duplicate?

South Korea was able to essentially mobilize a tremendous amount of resources, apparently, to get testing online quickly. And the United States, because in part we are historically very separated as individual states and even as counties — and then as hospitals and labs — we don't have the type of coordination that I think South Korea was able to put together to really bring resources into one place and clearly make a very efficient protocol for testing many, many people.

Michael, I wonder if you have any insight into the wildly different experiences of Americans waiting 48 hours for test results or told they can't be tested or clinics that tell them to call the CDC? Is that a lack of tests, or just a function of the decentralized health system in this country?

It's a combination for sure. Many of the tests have to be sent out to laboratories that might be across the country. So that leads to a delay just in shipping. But the biggest delay in this is that many people just can't actually get any tests. And that's really being driven by a lack of testing that is available. There is not enough capacity at the moment.

So what are you hearing about what's being done to ramp up the testing capacity? I mean, this is now a pandemic.

Yeah. So there are major efforts that are underway at all levels. The FDA, for example, has gone to extraordinary lengths, in my opinion, to try to decrease as many barriers as possible to allow laboratories to get online. But ultimately, this is going to be a continued problem until we figure out how to really get all of the smaller labs that would normally be doing these types of tests for their patients to get online. And this is going to require the industry partners who normally create these tests to get FDA approval and be able to get those cartridges and tests out to the many, many smaller hospitals that are around this country.

Who or what agency is responsible for getting this thing accelerated ASAP? Is it Health and Human Services? Is it the president? Who is it?

The way that our health care system works is, generally, laboratory testing is not nationally controlled. What that means is that nobody individually is necessarily in charge of making sure that the US is on track. Unfortunately, we are exposing one of the weaknesses in our country of not having centralized health care and centralized laboratory testing. We are seeing now that it's very, very difficult to coordinate massive efforts across the entire country. But that's really what is needed if we want to keep everyone in this country safe.