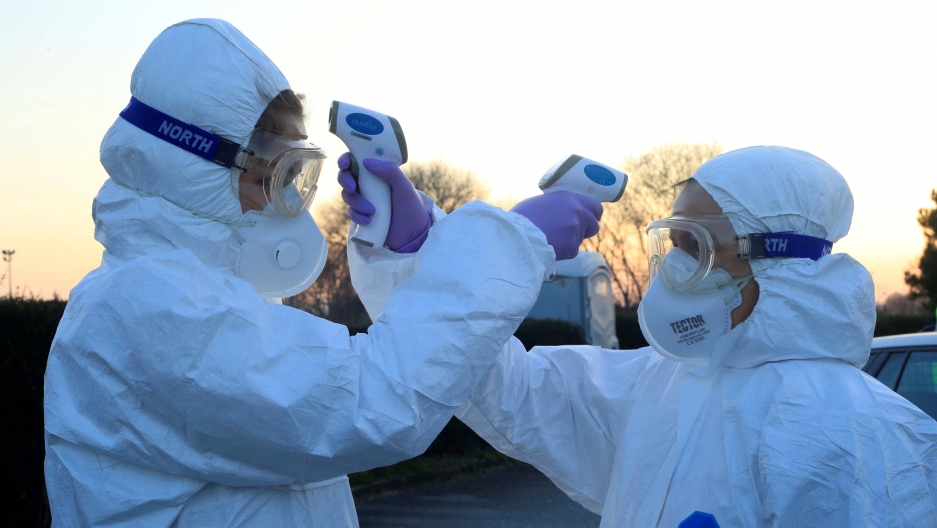 Medical staff use thermometers during checks for coronavirus (COVID-19) at the border crossing with Italy in Vrtojba, Slovenia, on March 11 , 2020.

It’s official: The coronavirus outbreak is now a pandemic. That was declared Wednesday afternoon by the chief of the World Health Organization, Tedros Adhanom Ghebreyesus.

An epidemic is a regional outbreak of illness. A pandemic is the worldwide spread of disease affecting large numbers of people.

“‘Pandemic' is not a word to use lightly or carelessly," he said. "It's a word that, if misused, can cause unreasonable fear."

Ghebreyesus said today's reclassification does not change what countries or the WHO should do in response to the outbreak.

Prior to the WHO's announcement, German Chancellor Angela Merkel warned that 60%-70% of the German population could contract COVID-19. Merkel said when there is no vaccine and no therapeutic options, a higher percentage of the population will be infected.

Marcel Salathé is an epidemiologist at the Swiss Federal Institute of Technology Lausanne in Geneva. He spoke to The World's host Marco Werman about how the coronavirus is spreading.

The World: Do you think Angela Merkel is being alarmist?

Marcel Salathé: I don't think she's alarmist. I mean, it's great actually to see a world leader step up and start to work with actual numbers. We know that this is a fairly contagious virus. And so this thing will infect a large part of the population if we don't stop it. And the most important thing is to realize that we can still get this more or less under control. Whether we can fully stop it, that's sort of an open question, but at least we can try to flatten the curve.

US President Donald Trump has taken pretty much the opposite approach from Angela Merkel. He's been downplaying the possible impact of the coronavirus, often getting corrected by Dr. Anthony Fauci as to the facts. What do you think of the tone a leader should be taking at this moment?

They would strongly suggest to all leaders of the world to take a page out of the playbook that we've seen in Asia. There, many leaders have been very clear about this. The Singaporean leadership, for example, has been very clear, has been focused on the science, has been communicating very transparently from early on. And that is incredibly important because, for these social distancing measures that we now need to implement, you really need the buy-in from the population. And the best way to do that is to be clear, to be based on the facts and to be transparent about it.

Well, you are an epidemiologist, so let's get into some of the science here. How fast is the coronavirus spreading right now? What is the trajectory?

The trajectory that we know from early data is that in the absence of any measures, you should see this thing grow and potentially double every week. And so one does not need to be a mathematician to understand that if we let this thing grow at this pace, it will quickly overwhelm the systems.

So, knowing that, doubling every seven days — what should governments be doing at this point to contain COVID-19?

Well, I think the most important thing is to start and take this as serious as it actually is. I've been a bit puzzled by the relatively slow response, particularly in Europe and, of course, also the US. I would just like to remind everyone also, for example, of the Italian situation. I mean, just three weeks ago, this thing was essentially nowhere. And now this system is completely overwhelmed, and we hear very tragic stories.

Yeah, I mean, Italy should be the boldface writing on the wall. But I gather you've got concern that people who don't live in Italy are interpreting what's happening there incorrectly.

Yeah. People say, "Oh, you know, the Italian population, a lot of old people. And, you know, maybe the hospitals are not so good." Admittedly, there are a lot of old people. That's, of course, a reflection that the health care system is actually very good. And I also like to remind people that this is happening in the north of Italy — so, the north of Italy is a very wealthy place. And these are excellent hospitals. And to see these hospitals all of a sudden being completely overwhelmed within two weeks, I mean, that should give everyone pause.

Related: Life after coronavirus lockdown: A California family stranded in China ventures outside.

China seems to have reduced the rate of COVID-19 cases. But critics say politically they can take measures that more democratic countries cannot. What is your response to that?

I think it's not a good time now for criticism. I think there's a couple of countries in Asia that have managed to deal with the situation. South Korea is another one. And so I think we should just learn whatever we can. Obviously, it's understandable that nations in the West, nations and countries in Europe, the US, may not be able  — and may also not want — to take the exact same measures or do it in the exact same way. From a viral perspective, that's really not important here. What's important is that something gets done and that can be done in the context of your situation. But it's definitely not the time to now ask, "Can we do what the Chinese or the South Koreans did?" We just need to see: What have they done? Why did this work? And what can we do now to make sure we also get that under control? Because in a couple of weeks, this will be too late, and this will be a completely academic discussion.