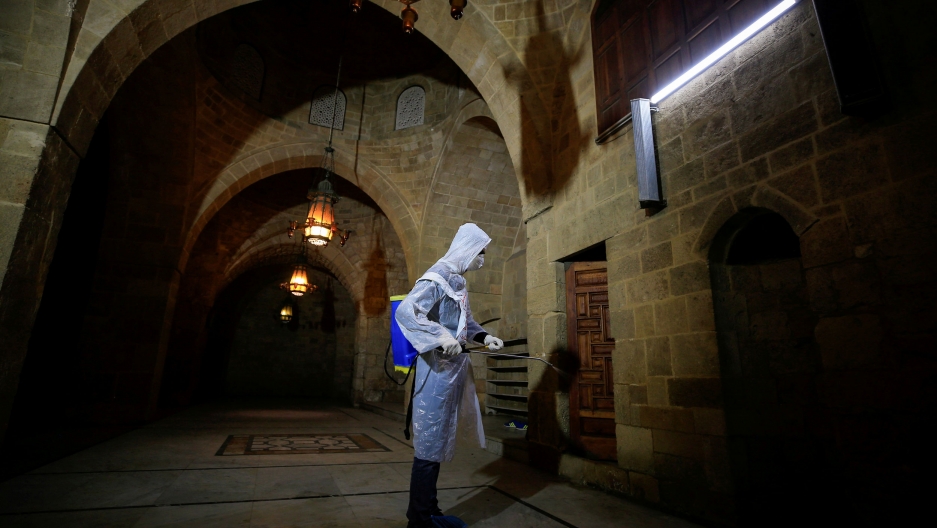 A volunteer sanitizes a mosque, as a precaution against the spread of the coronavirus, in Sidon, Lebanon March 12, 2020.

Goods flew off the shelves at a supermarket Wednesday in Beirut as Lebanon announced new travel restrictions in response to the novel coronavirus. By Thursday, supermarket shelves were restocked, but the country faces a unique problem in the midst of the pandemic.

Almost everything Lebanon consumes is imported — and COVID-19 has struck as Lebanon slides deeper into a dire financial crisis brought on by government corruption and mismanagement. Since October, protesters have been in the streets demanding a new government and an end to the country’s sectarian political system.

The Lebanese lira has lost around 40% of its value against the US dollar in recent months. That means everything is going up in price, especially imported goods — which comprises most food, medicine and medical supplies. 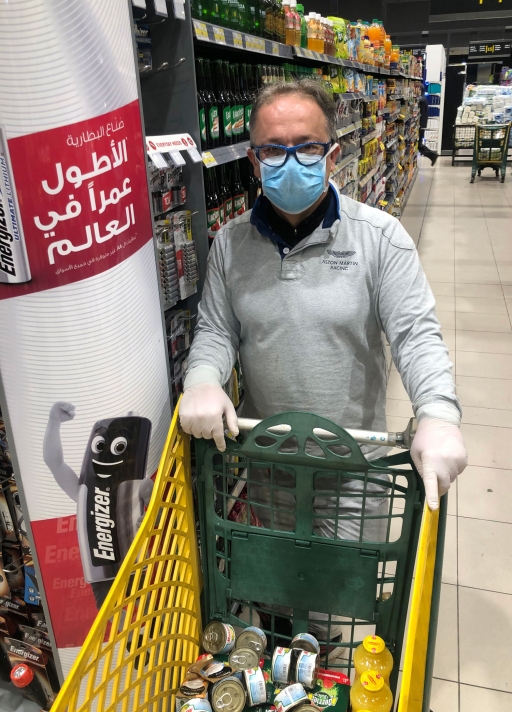 Dr. Abraham Hadid, an orthopedic surgeon, pushes a shopping cart at a supermarket in Beirut, Lebanon.

“I’m buying everything I need for a long time,” he said, wearing a face mask and plastic gloves. “I don’t want to come back here because of corona.”

Hadid says Lebanon has good doctors and a relatively strong health system, but that system is strained by the economic crisis. That will hurt the country's ability to respond to the outbreak of COVID-19. As of Friday there were 77 confirmed cases and three deaths in Lebanon, and the numbers are rising.

“All the equipment we need, needles … serum, the prices of everything are increasing,” Hadid said. “We have two crises so close.”

Rafic Hariri hospital in Beirut announced seven new cases of the virus Thursday. Earlier this week, employees of the hospital, the main facility dealing with COVID-19 patients, went on strike because of a long-standing salary dispute and lack of personal protection they say is needed for protecting them from the virus. Organizers say care has not been affected so far.

Decades of corruption and financial mismanagement have pushed Lebanon close to financial collapse. This week, the country defaulted on a loan payment for the first time and is in talks with creditors and the International Monetary Fund to try to find a way out of the crisis.

Most anti-government demonstrations — which have been happening for months — have now been called off to avoid large gatherings, but protesters have not abandoned their revolution against the country’s elites.

Instead, they say the government's slow response to COVID-19 is another example of why Lebanon needs change. Protesters have also adapted one of the revolution’s most popular chants about the country's former foreign minister into a hand-washing jingle.

“This one is easier to remember,” reads the caption on an Instagram post. “Be a good citizen and wash your hands properly.”

This one is easier to remember. Be a good citizen and wash your hands properly.

Lebanon has now canceled flights and barred entry of passengers from coronavirus hotspots, while giving Lebanese nationals in outbreak countries only until March 16 to return home. Sterilization crews in white suits are spraying the parliament and public areas with disinfectant. The government even announced it would increase the speed of Lebanon’s notoriously slow internet, just to encourage people to stay home.

Bars have been ordered shut and restaurants are now restricted to delivery service with police showing up to kick patrons out of venues that do not comply. Universities and schools are also shuttered.

Citizens have been critical of the government’s slow response — including allowing flights to land this week from Iran, where thousands of people are infected by the virus in one of the worst hit countries other than China. Critics accuse the Lebanese government and the powerful Hezbollah party of prioritizing their relationship with Iran over the health of Lebanese citizens.

Passengers arriving from abroad this week said that there were few precautions in the Beirut airport, besides temperature checks, and no orders for quarantine.

But not everyone is panicking.

“We grew up in the war generation,” said Sami Chicha, who is in his 50s, as he did his daily shopping. “We can accommodate and adapt. … This is part of the problem of the Lebanese usually, we adapt. They adapted to misery; they adapted to corruption.”

He and his wife were buying a few extras — water, imported diapers and wipes. Only the water is produced locally and Chicha said even the plastic for the bottles is imported.

What needs to happen, he said, is more government control to stop price gouging of the increasingly desperate Lebanese.

“We don’t see the ministry of economy stepping in. We don’t see consumer protection agencies doing their work,” he said.

And the situation is likely to get much worse before it gets better.