Beginning Sunday night, those schools face off in a competition before tens of thousands of people in Rio’s samba stadium, where the around 4-to-6-ton floats will project different versions of Brazilian history to spectators. Rio’s Carnival is set apart by the elaborate themes of these parades. They elevate lesser-known historical figures, make social critiques, and sometimes even poke fun at politicians. This year’s themes wade deep into questions of race, class, religion and Brazil’s scandal-ridden government.

To make the parades come alive, over 3,000 artists and builders like Cielo work year-round on Carnival. 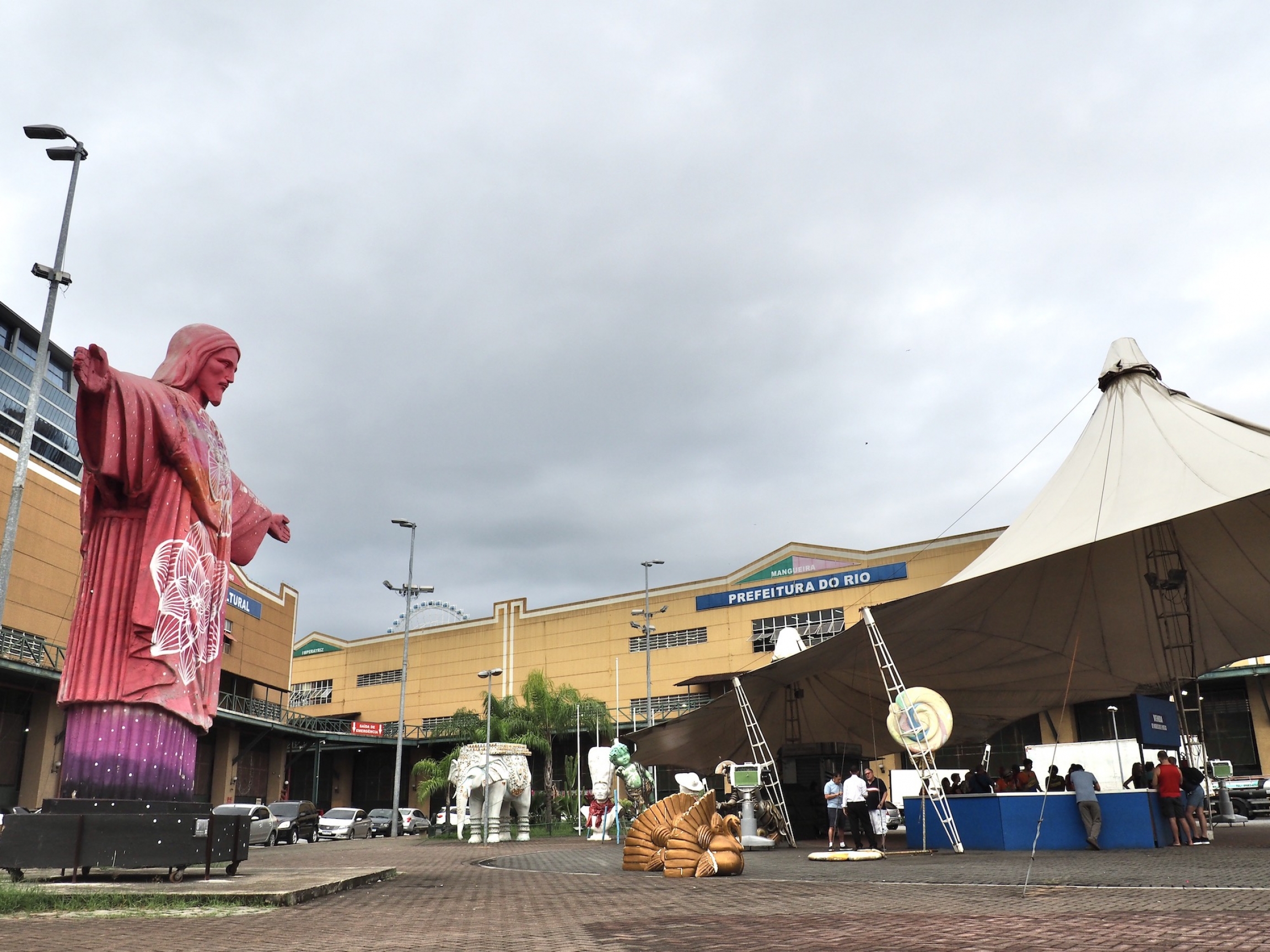 Elements of Carnival floats from years past decorate the plaza of the garage-lined block in Rio's industrial Port Zone where the city's premier samba schools build their floats.

Their garages ring an entire city block in Rio’s industrial Port Zone. They open into a central plaza, where, as Carnival approaches, supply trucks and motorcycles whiz by and costumed dancers scurry around. Music filters out of each of the workshops, and workers sometimes bang along with the beat.

Last week, Cielo, who worked first on shopping malls and then on film sets before shifting to the world of Carnival, put the finishing touches on the opening car for his school, Grande Rio. Their parade tells the story of a historical Afro-Brazilian religious leader who was active in the 1930s through the 60s.

The float represents the divine visions the leader, Joãozinho da Gomeia, had as a young man. It looks like a two-deck barge, with sides made of African masks and giant lanterns. Multicolored fishing nets and handmade lace drapes hang from the top deck. 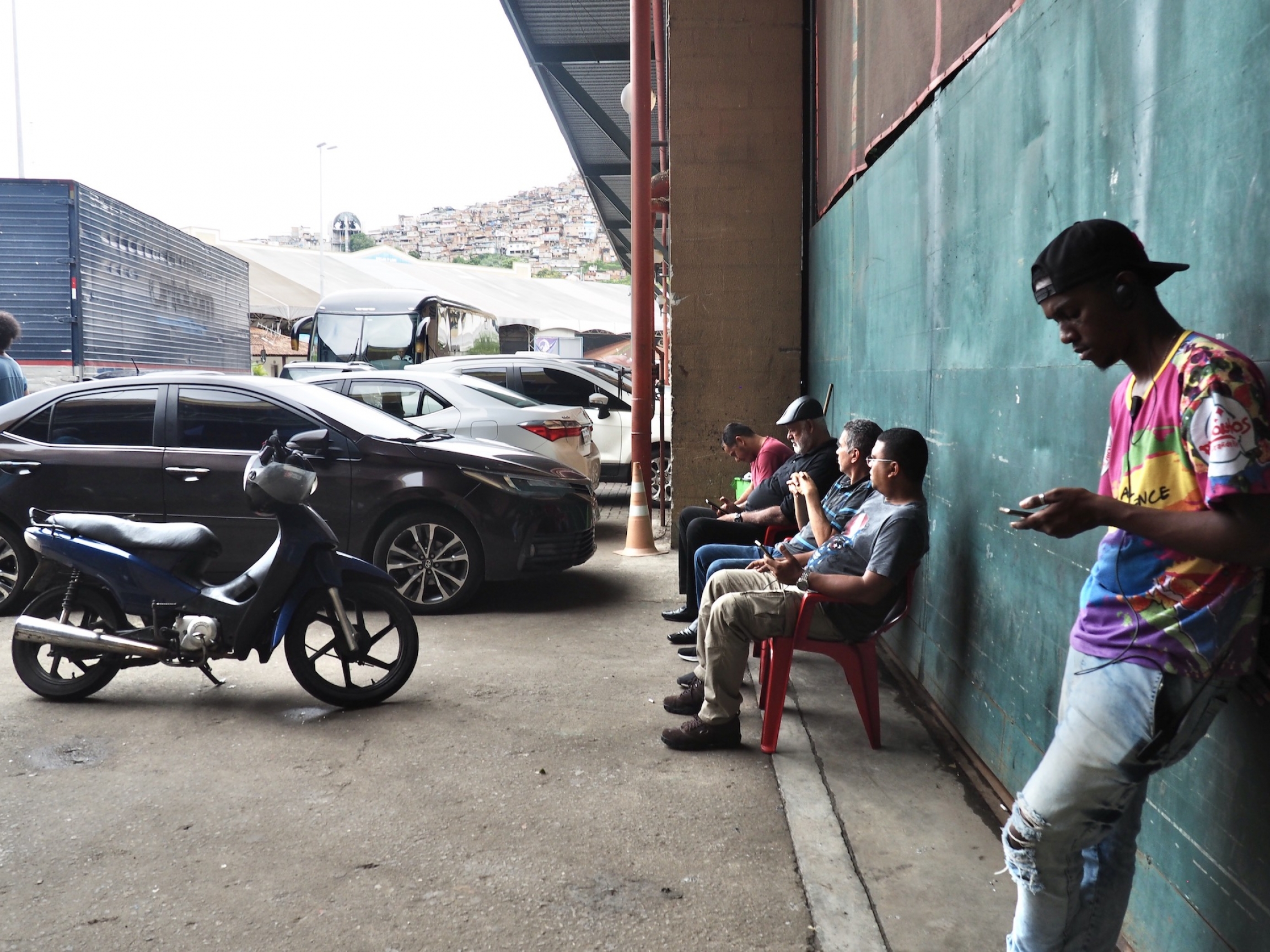 In front of samba school Grande Rio's workshop, deliveries of materials arrive, while Rio's working-class neighborhood of Providência rises above the samba garages in the distance.

Gomeia “didn’t understand his visions, so he set off on a journey to study and practice Afro-Brazilian faith,” Cielo said. “His work eventually earned him visits from the president of Brazil and the queen of England.”

Rio’s samba schools widely publicize the story of their parades each year, so that people watching can understand what they mean. The floats serve as moving theater sets for the dancers on top, who sing a samba ballad that narrates their tale.

Art historian Felipe Ferreira, one of the judges in a set of prizes known as “the Oscars of Carnival,” said the floats are evaluated, above all, for the stories that they tell — not simply based on conventional beauty.

“Art is what draws your attention. Sometimes, art shocks you.”

“Art is what draws your attention,” Ferreira said. “Sometimes, art shocks you.” 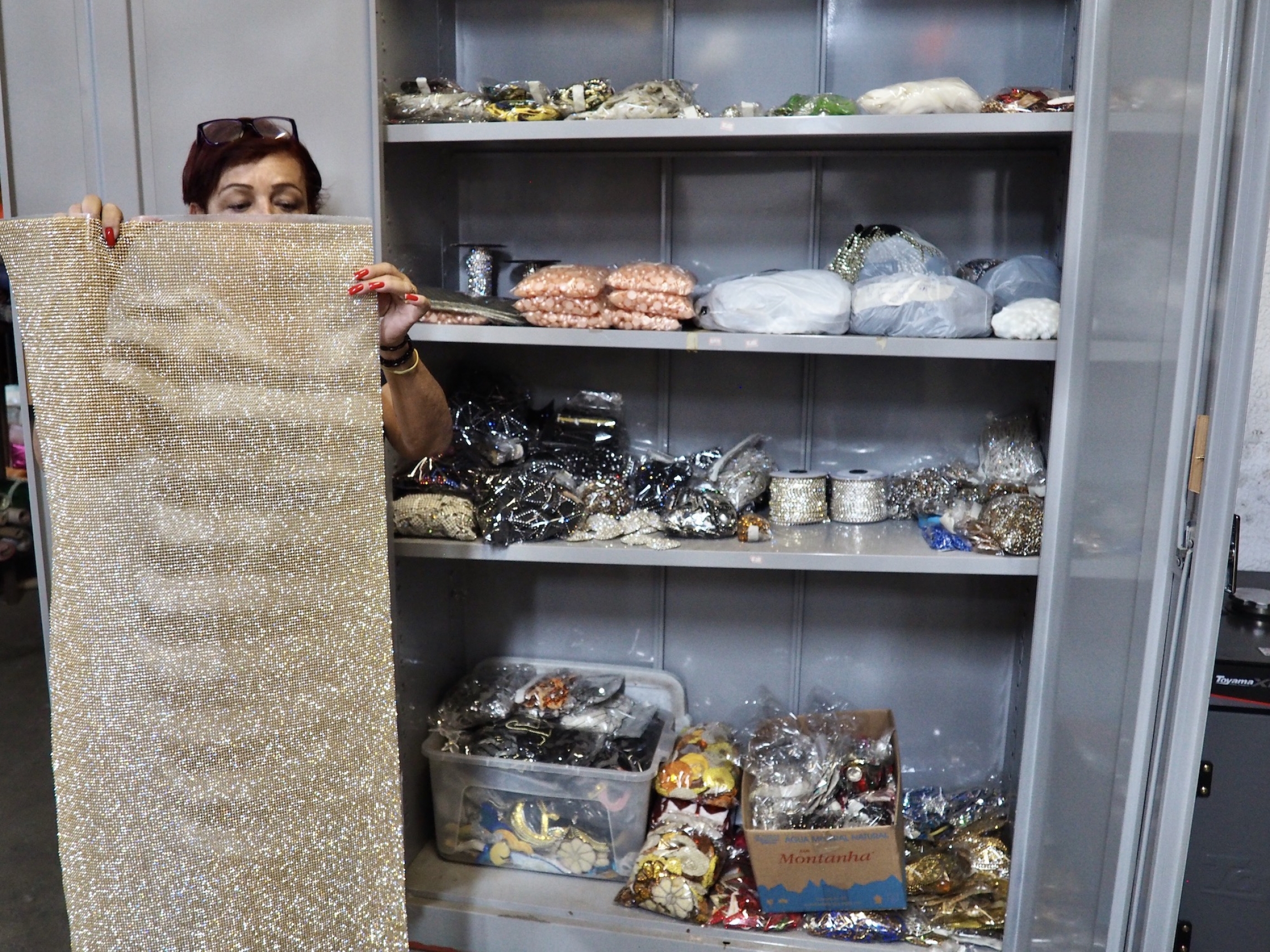 Each samba school's workshop has its own storehouse of fabrics and costume materials such as strings of beads and sequins of all colors and sizes.

One float that is generating buzz ahead of this year’s parade is a life-size model of a poor neighborhood. It celebrates the neighborhood’s positive qualities by depicting children playing and musicians performing. Another float portrays Jesus as gay, a measure that has drawn a scathing note of condemnation from a conservative Catholic group.

Related: Evangelicals in Brazil see abuse of God's earth as a sin — but will they fight to save the Amazon?

“Even Carnival parades without that kind of overt messaging are an important form of cultural resistance. To choose to celebrate, dance and be happy, in spite of all that is happening around you, is political.”

“Even Carnival parades without that kind of overt messaging are an important form of cultural resistance," he added. “To choose to celebrate, dance and be happy, in spite of all that is happening around you, is political.”

In order to build the floats, Cielo said all Carnival designers begin from the same basic structure: a motorized platform with a driver in the front and a large generator in the back to power lights and moving parts.

“You build up the structure with iron and wood siding,” he said. Next come Styrofoam decorations, paint, lighting and any other special effects. 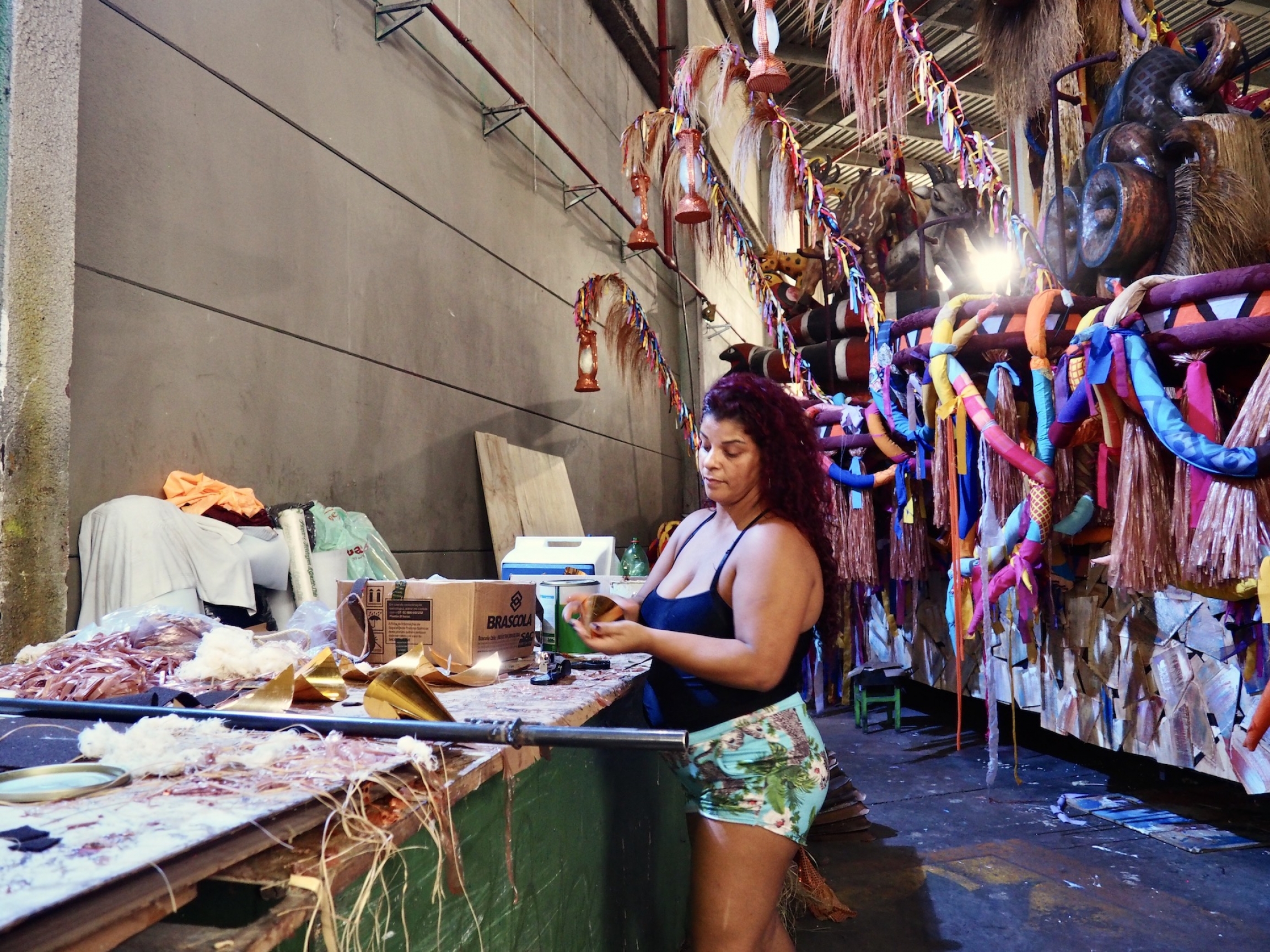 While some materials for carnival floats are soldered or hammered together, many elements are also assembled by hand.

As final preparations are made, dancers test the weight capacity of the floats with full-scale rehearsals. Cielo said the floats can carry as many as 100 dancers.

While some samba schools, like his, aim to project dignity and grandeur, others aim to make people laugh. That’s the case of São Clemente. Recently, the school was conducting an electricity test. Generators were humming and yellow lights were flashing in all directions.

Their parade is dedicated to “scams that have fooled gullible Brazilians over the years,” said Thiago Almeida, the garage supervisor. 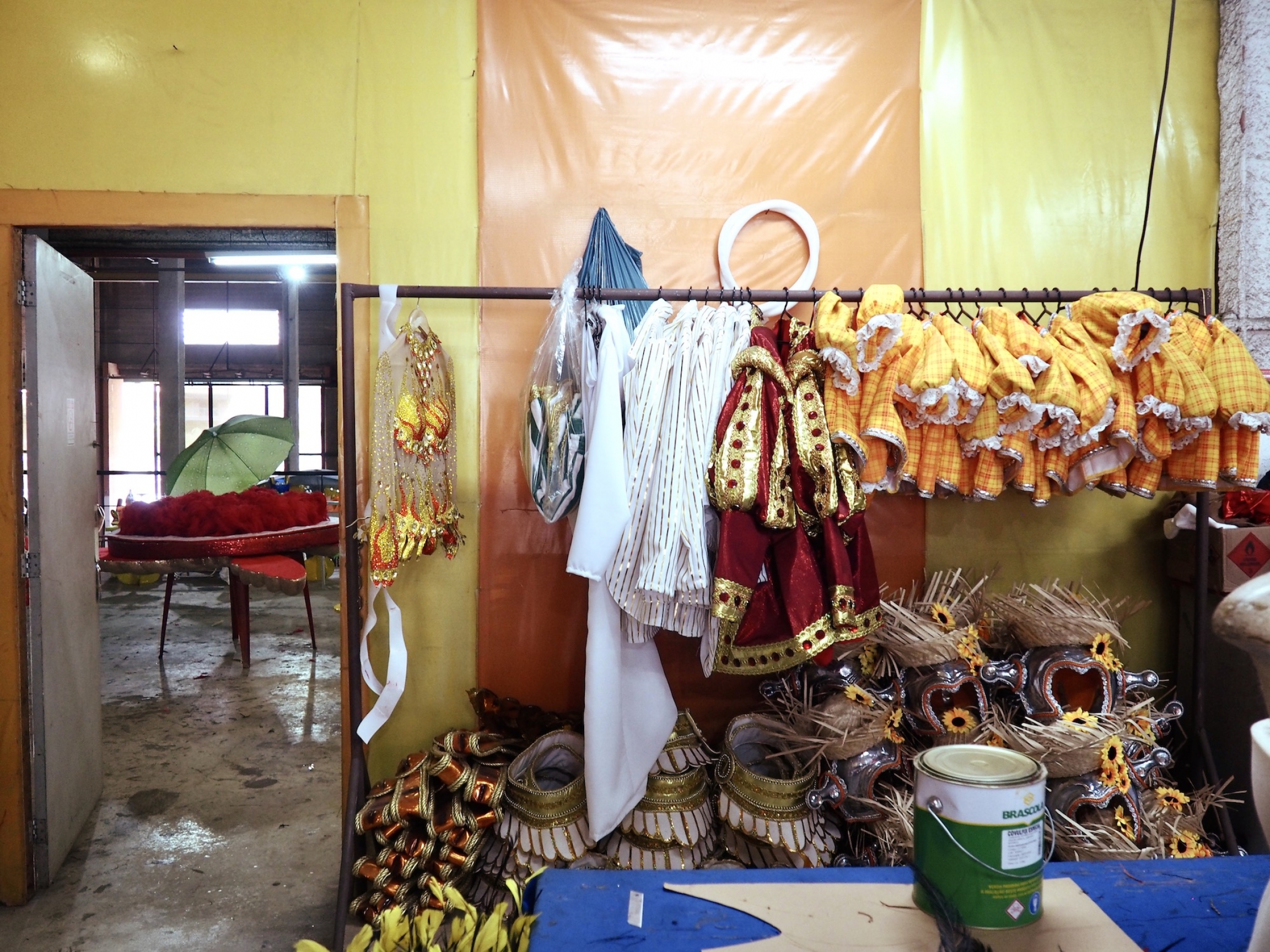 São Clemente’s samba ballad mentions the true story of a man who made money claiming to sell Brazilians’ property on the moon. And one float will feature a famous comedian known for his impressions of Brazilian politicians. It's rumored that for the big reveal on Monday night, he will dress as Brazil's president, Jair Bolsonaro, who promised during his campaign to end corruption in the country — a pledge some have found laughable. 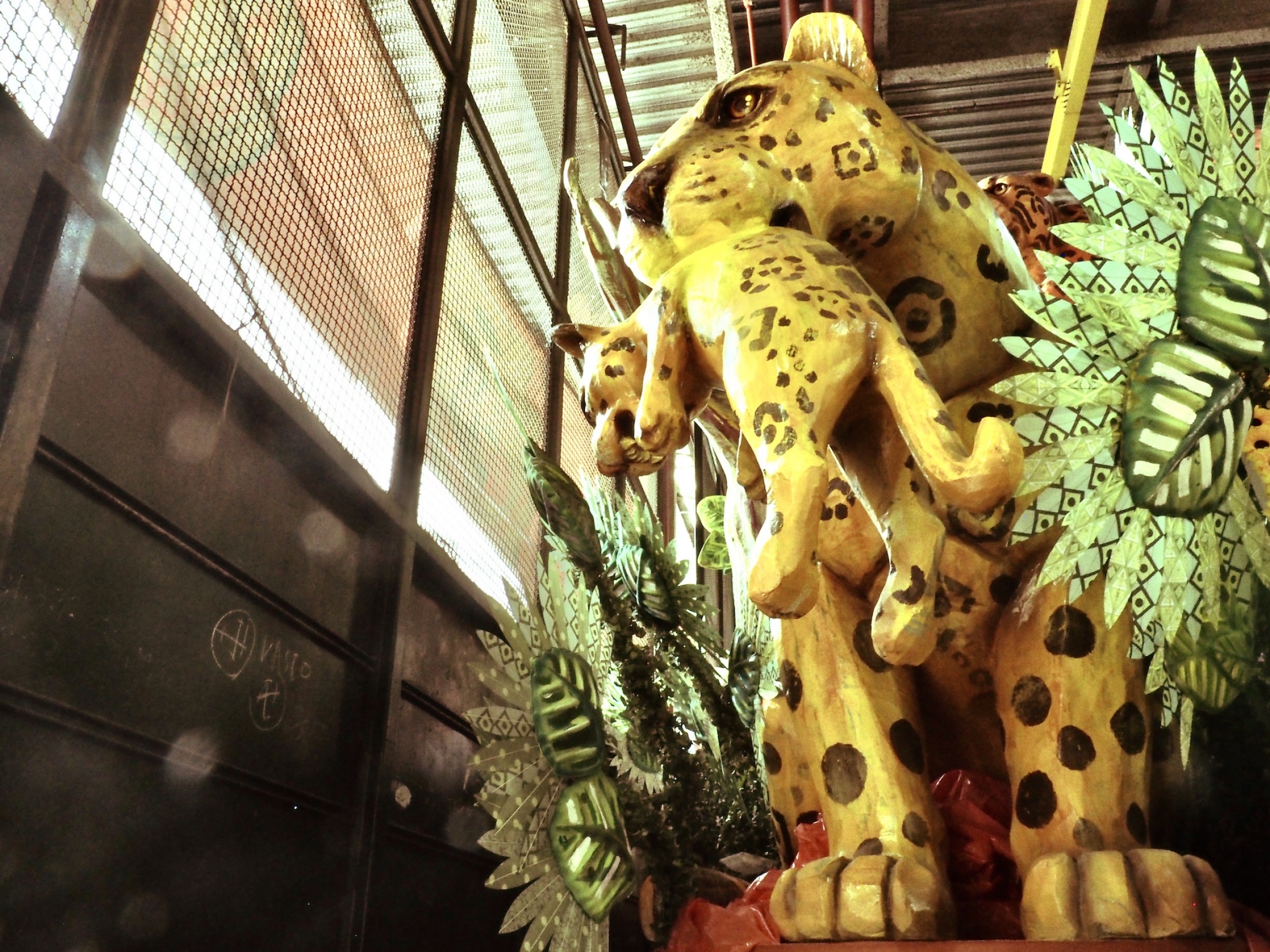 A leopard from a Grande Rio float is is the first thing to greet visitors to the samba school's workshop.

“Laughing helps people better absorb a message that is being sent. [Their message?] Don’t believe everything you hear.”

Jorge Silveira, who designed this parade, said, “Laughing helps people better absorb a message that is being sent.” Their message? “Don’t believe everything you hear.”

It’s these social critiques and historical tributes in Rio’s Carnival parades that make them more than just a party. In between the floats’ sequins and electrical rigging, the artists hope onlookers can glimpse new insights into Brazilian history and their own identities.