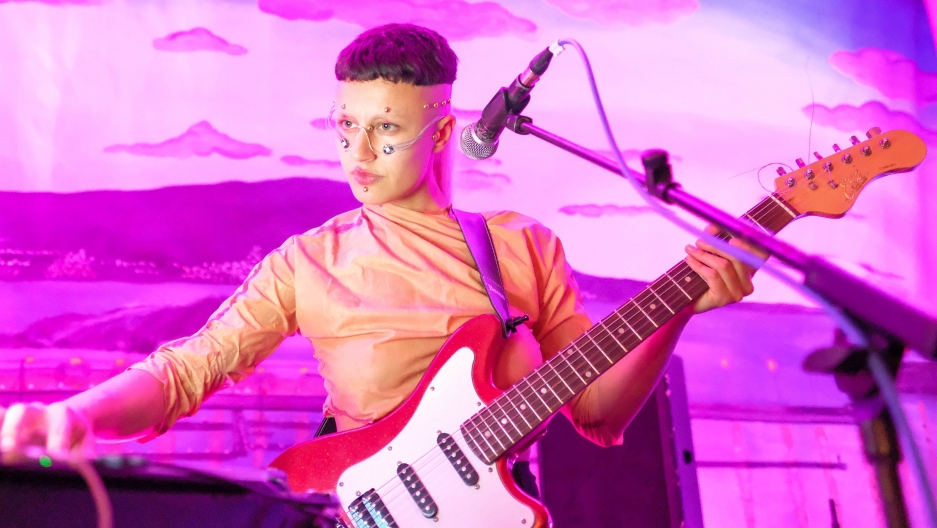 Courtesy of Your Dance Insane/Tremor Festival

Maria Beraldo has the word “Trouble” emblazoned in bold black letters on her bright red leggings. For this Brazilian lesbian singer-songwriter, speaking openly about political issues is just part of who she is. 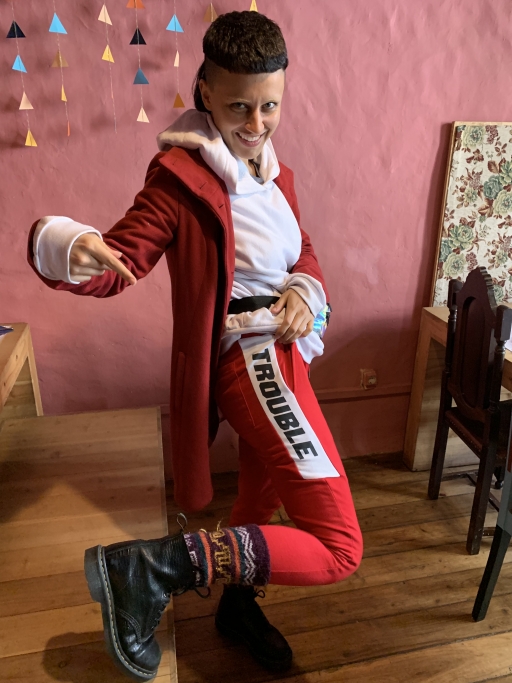 For Brazilian lesbian singer-songwriter Maria Beraldo, speaking openly about political issues is just part of who she is.

Beraldo is gaining fans with her provocative, opinionated lyrics, and has found a niche audience in Brazil, especially among young women and girls and many in the LGBTQ community.

“We have something like a dictator,” Beraldo says. “Our government is being closed. One of the most powerful technologies of oppression is to silence a lot of stories. In Brazil, we have a lot of artists and people and everybody thinking and talking about freedom and putting [themselves] out.”

“We are actually in a moment now that is really complicated,” Beraldo says. “It’s really hard in Brazil now, [homophobia] is growing.”

In the poignant, direct lyrics of her song “Maria,” Beraldo creates a world revolving around women, telling her story through the lives of her mother and grandmother.

Beraldo says men have long been telling stories through their own perspective, leaving women out. “A lot of histories are being silenced,” she says. “My album is telling my history, and I think it is really powerful for a lesbian woman to say her history.”

São Paulo-based sociologist and music researcher, Pérola Mathias, says this music can have an impact on Brazilian society.

“Traditionally, we don’t have so many singers that [sing] as a lesbian, putting this kind of voice in the lyrics ... Maria Beraldo is doing this."

“Traditionally, we don’t have so many singers that [sing] as a lesbian, putting this kind of voice in the lyrics,” Mathias says. “Maria Beraldo is doing this. When she passes this kind of message, it’s [a] kind of resistance forming in the public, in an artistic way, in an aesthetic way, and in a political way.”

Beraldo started as a classically-trained clarinetist, then went on to study music at the prestigious University of Campinas — São Paulo, where she became immersed in the city’s music scene. Now 31, Beraldo says she’s been playing music for as long as she can remember.

“I actually started in my mother’s body, because she’s a musician,” Beraldo says. “My parents are musicians, so I always had this at home. My mother opened a music school when I was 6 years old so I started to study there, and I had this privilege of having a music school as my house.”

Beraldo’s album is titled “Cavala,” which is also the name of the first single she recorded on her album. The word “cavalo” is masculine and means horse in Portuguese. But the word “cavala” can be used as an offensive term for women who are attractive by common societal standards, but considered robust or too strong, like a man.

In her song “Cavala,” Beraldo reclaims the word.

“I think that word has the strength of the animal and the strength that was taken from us,” Beraldo says. “Like, men are strong, men are brave, men are like the horse. And, actually, we are that. We are supporting everything. Women had that strength much more than them ... So, it was a word that started to come out in my life because of this music.”

Pérola Mathias, the Brazilian sociologist and music expert, says Beraldo’s music sends a message to girls and young women, especially in an era when they’re growing up “hearing the most important power of the country saying women [are] not good to [be in certain roles.]”

“Maria Beraldo can be an example of a free woman for them, and I think it’s important in this conservative moment."

“Maria Beraldo can be an example of a free woman for them, and I think it’s important in this conservative moment,” Mathias says. “This music can say to them, “You can do whatever you want being a woman.’”

“Maria receives many messages from young girls, mainly from Instagram, saying ‘Maria, thank you very much, you made me realize how I can be a lesbian girl in this male chauvinist era and society,’” Toledo says. “So, I think it’s really, really important."

Beraldo’s live concerts attract thousands of people across Brazil, and she spreads her message through social media as well. Her Instagram following has grown to more than 16,000 people.

“I think that a lot of women and a lot of lesbian women listen to my history and identity, and that gives a lot of strength [to] those people,” Beraldo says. “The way that we can start to change things is to let each person tell her history.”