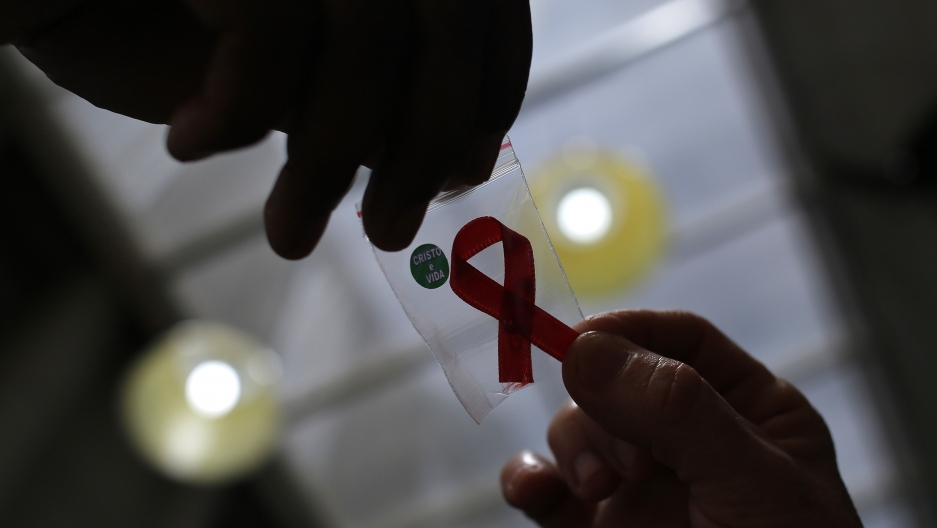 A nurse hands out a red ribbon to a woman, to mark World AIDS Day, at the entrance of Emilio Ribas Hospital, in Sao Paulo December 1, 2014.

On a Thursday night at a busy crossroad in Rio de Janeiro’s nightlife district, several young men set up a tent with a giant banner announcing free sex education and HIV testing.

Reinaldo Ribeiro, Jr., has been a sex educator for ten years. He said when he started out, more than half of his work was commissioned by public schools seeking workshops for students on topics such as STD prevention, anti-homophobia education, and recognizing sexual violence.

That’s not the case anymore. Brazil’s ascendant religious right is winning a war over sexual health information — and educators like Ribeiro find themselves increasingly marginalized.

“We are trying to reach people any way we can,” Ribeiro said. “Public schools are closing their doors to us.” Like the volunteers he supervised from the AIDS nonprofit Pela Vidda, which means “for life” in Portuguese, he wore a vest with a giant rainbow-striped thumbs-up symbol.

In recent years, sex education has become a flashpoint for Brazil — a trend that was amplified when Brazil’s president, Jair Bolsonaro, took office in January. Bolsonaro supports federal legislation that would limit sex education in classrooms, and since 2017 more than eight Brazilian cities have passed similar laws at the local level. Bolsonaro also supports a conservative social movement that instructs parents to lobby local governments and school principals — who have broad autonomy to set sex education curriculums — to cut them back.

Meanwhile, the number of new HIV cases each year in 15 to 24-year-old men has increased more than tenfold over the past decade. Studies have shown condom use is decreasing in general among that age group, and among men who have sex with men in particular. Syphilis, too, is skyrocketing, with new yearly cases among all Brazilians more than tripling since 2014.

Epidemiologist Lígia Kerr of Brazil’s Federal University of Ceará said cutbacks of teaching about safe sex in schools is “a repeatedly proven, serious risk factor” for the spread of HIV. Other likely causes for Brazil’s HIV spike in young men include the growth of dating apps and the drop in funding for AIDS nonprofits running public information campaigns, she added.

A 19-year-old college student, Batista said that the messaging he received growing up in Rio’s working-class outskirts was that “for men, not using a condom makes you stronger.”

“When you tell your friends you had a sexual experience with a condom, you’re going to be a joke with them.”

On average, Brazilians begin their sex lives around the age of 18, according to a 2016 study from the University of São Paulo. But health experts say many of them don’t get tested for STDs.

On a recent night, college student Milena Carina brought three male friends between ages 19 and 21 to Pela Vidda’s stand. They had never been tested for STDs before.

“The government’s position that children don’t need to know anything — that you can cover your eyes to this — makes everything more complicated,” Carina said. 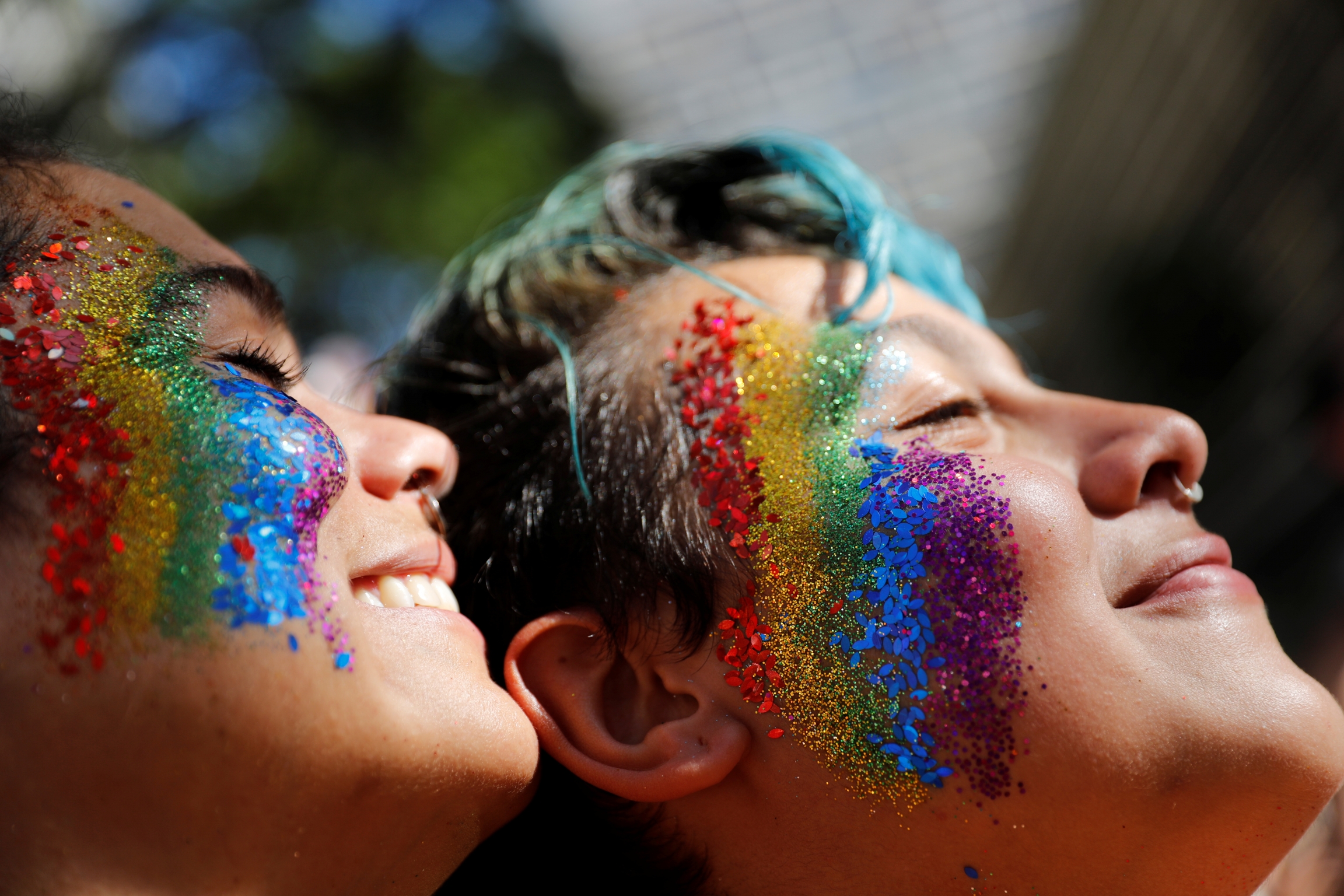 How Brazilian sex ed went from progressive to prohibited

Brazil drew up new federal education guidelines in the 1990s after its emergence from military rule. At the time, there was broad consensus about the urgency of addressing AIDS due to the recent discovery of Brazil’s AIDS epidemic.

The recommendations “were based on the crucial evidence that to truly learn something, you need to hear it more than one time,” said psychologist Mary Figueiró, author of four books about sex education.

The guidelines also suggested that themes such as sexual diversity, respect for personal boundaries, and the science of how diseases spread should appear in a range of classes, from history to literature to biology. Many schools followed this lead. By the end of the 2000s, Brazil’s federal government hosted an annual conference at which sex educators dialogued about their practices.

But those practices also earned increasing criticism from conservative Catholic and evangelical churches, which argued that the left-wing federal government was advocating for a break from traditional family values.

In 2010, an election year, the federal government ordered a nationwide distribution freeze on already-printed sex education books. In years since, the movement “Schools Without Political Parties,” which denounces what it calls overly sexual and overly political curriculums, has helped draft legislation pushed by conservative lawmakers at every level of government that aims to limit teaching about sex, gender equality, and political views.

“Parents should decide what kind of moral education their children receive.”

Bolsonaro embraced an extreme version of this view during his presidential campaign, claiming falsely that his left-wing opponent “created a ‘gay kit’” to change schoolchildren’s sexual orientations. Similar claims have boosted conservative political candidates from Costa Rica to Peru in recent years.

“Take a look, because this is in your children’s hands,” Bolsonaro said on a recent Facebook Live broadcast, gesturing to an educational pamphlet about how to use a condom. He instructed parents who did not like what they saw to “tear out these pages here,” then ordered the education department to recall the pamphlets, which it did.

Vagner de Almeida, an outreach coordinator at the Brazilian Interdisciplinary AIDS Association, discovered that school administators removed his sex education flyers from children’s backpacks after he gave a recent workshop.

“This is absurd. Young Brazilians are going to be exposed to sex on television and especially online, where disinformation is rampant.”

“This is absurd,” he said. “Young Brazilians are going to be exposed to sex on television and especially online, where disinformation is rampant.”

The pushback to the rollback

Brazil’s former attorney general Raquel Dodge petitioned the Supreme Court in September to issue an injunction against any “vague bans” on teaching, saying they violated Brazil’s constitution and international commitments to education. And after São Paulo governor João Doria ordered sex education books removed from schools in September, a court forced him to return them.

The United Nations has called on Brazil to step up its HIV prevention efforts, and a video series produced by UNAIDS encourages young Brazilians to push for sex education in schools.

Recent UN evaluations of Brazil’s efforts on AIDS highlight the paradox of the country’s approach to the epidemic: Though HIV is spreading at one of Latin America’s highest rates, Brazil offers universal free treatment for the virus, including cutting edge pre-exposure drugs.

Efforts to address the rise of HIV among youth include free condoms at public clinics, information and testing campaigns targeted at young people, and trainings for peer-to-peer educators, a spokesperson for the Brazilian health ministry said in an email. The HIV tests conducted by Pela Vidda, for example, were provided by a government hospital.

Teachers and health workers nationwide continue to organize against the proposed education bans with the help of a coalition called Schools Without Censorship that tracks legislation.

“Young people want information,” said Batista, the Pela Vidda volunteer, at the nighttime stand. “The government’s false moralism is leaving them in danger.”