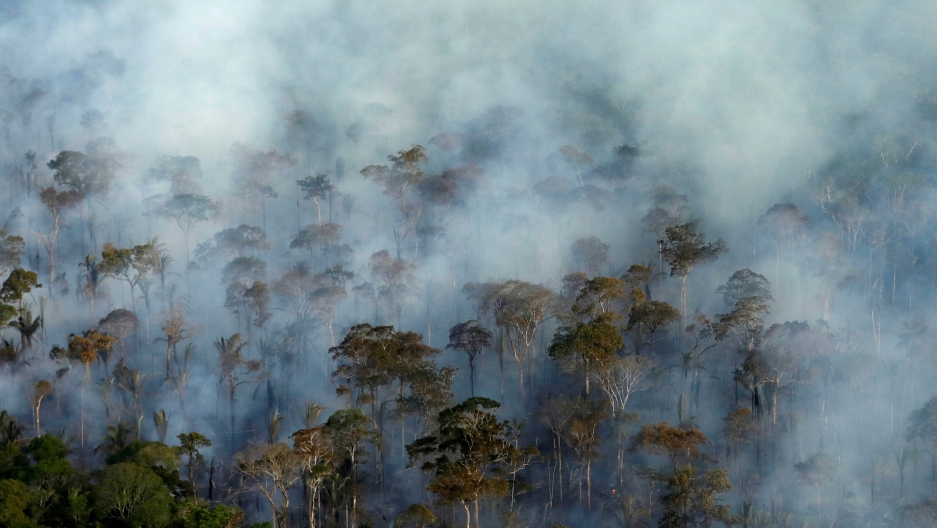 When the Brazilian city of São Paulo abruptly went dark at midday on Aug. 19, there was talk of the Apocalypse — not all of it in jest.

For some conservative Protestants, however, São Paulo’s sudden eclipse illustrated something they already believed to be true: Humans have violated God’s plan for the Earth by abusing the environment — and climate change is the result.

Christians and the climate

In a famous 1967 article in the journal Science, the historian Lynn White argued that Christianity hurts the environment because the Bible teaches believers that God gave them “dominion” over the world. Therefore, White wrote, many Christians feel they may treat the Earth as they please.

Among Christians in the United States, evangelicals are least likely to believe that climate change is real and human-caused, according to public opinion polls and academic research.

This is not the case in Brazil. There, evangelicals and Pentecostals — who make up about 30% of the Brazilian population — are just as environmentally concerned as other religious groups, public opinion surveys show. In fact, some surveys find that church attendance actually boosts Brazilian evangelicals’ environmental concern.

My own research on politics, religion and public opinion in Latin America reveals that many conservative Protestants in Brazil don’t just believe in climate change and think of it as sin. Some even see environmental destruction as a sign of the coming Apocalypse.

“God put everything in our hands perfect,” one evangelical pastor from the Brazilian state of Pernambuco told me during an interview in March. “We’re destroying it.”

I cannot name the pastor, as, under the terms of the academic ethics boards overseeing my research, all names must remain protected.

Another pastor from the Assembly of God, Brazil’s largest Pentecostal church, explained to me in 2014, “God made the universe. He put fish of all colors … trees, all sorts of little birds. Every year,” he continued, God “sends flowers. Now man in his sinfulness destroys it all. He kills the little birds, he burns down the forests.”

Related: Activists in Brazil are fighting to protect the environment — and their lives

Rightists but not anti-environment

This faith-based distress at humanity’s poor stewardship of God’s creation has some powerful and outspoken proponents in Brazil.

The Catholic Church recently held a global meeting addressing the climate crisis in the Amazon. And Brazil’s former environment minister, Marina Silva, a member of the Pentecostal Assembly of God, has voiced horror at the recent fires consuming the Amazon.

Silva leans left, but most Brazilian evangelicals are politically conservative. So their environmental beliefs aren’t necessarily reflected in their voting records.

Brazil’s right-wing president, Jair Bolsonaro, won 68% of evangelical and Pentecostal voters in last year’s presidential election. Bolsonaro, a climate skeptic whose policies have dramatically accelerated the rate of deforestation in the Amazon, appealed to evangelicals and Pentecostals with his deeply conservative views on gender, sexuality and religion’s role in society.

A survey I conducted after Brazil’s 2018 election found that voter attitudes toward environmental protection had no bearing on their candidate preference.

Bolsonaro did not hide his disregard for environmental protections on the campaign trail. But many evangelicals I’ve interviewed had no idea Bolsonaro was planning to remove restrictions on fires for tree-clearing in the Amazon. They supported him because he opposes gay marriage and supports school prayer, they said.

The outbreak of human-made fires in the Amazon, which spurred a global reaction, has suddenly made the environment much more politically salient in Brazil.

Surveys in August found that 96% of Brazilians thought President Bolsonaro should do more to combat deforestation. There was no difference between the views of people who had voted for Bolsonaro and those who had not.

Bolsonaro’s support among evangelicals has fallen substantially since he took office in January, according to the polling firm Datafolha. Just 37% of evangelicals now think Bolsonaro is doing a “good” or “great” job.

This trend isn’t limited to evangelicals. Bolsonaro’s popularity has dropped in virtually every demographic group. The decline began well before the crisis in the Amazon, but Bolsonaro’s handling of the fires may have shaved five points off his approval rating.

This scenario creates the possibility that right-wing evangelicals and traditional environmental groups in Brazil could unite to push the Bolsonaro administration to better protect Brazil’s rich natural resources.

Bringing Brazilian evangelicals into the environmentalist movement would require, among other changes, a shift in language.

“A religious leader’s discussion with his followers is totally different from a scientist or an environmentalist,” Paulo Barreto, director of the Amazon Institute of People and the Environment, told the Brazilian newspaper Estadão in 2007. “It’s more emotional.”

Talking about “God’s creation” might feel uncomfortable to scientists and some progressives. But research shows that emphasizing the common values between Christians and environmentalists can foster more productive engagement.

“By beginning with what we share and then connecting the dots between that value and a changing climate,” she wrote, “it becomes clear how caring about this planet and every living thing on it is not somehow antithetical to who we are as Christians, but rather central to it.”

New environmental coalitions are already forming around the endangered Amazon.

Domestic and international pressure has led Bolsonaro to impose a 60-day ban on all burning in the region and to authorize Brazil’s armed forces to fight fires. This October, the Brazilian Amazon had fewer forest fires than any October since 1998.

Amy Erica Smith is the associate professor of Political Science as well as Liberal Arts and Sciences dean's professor at Iowa State University.