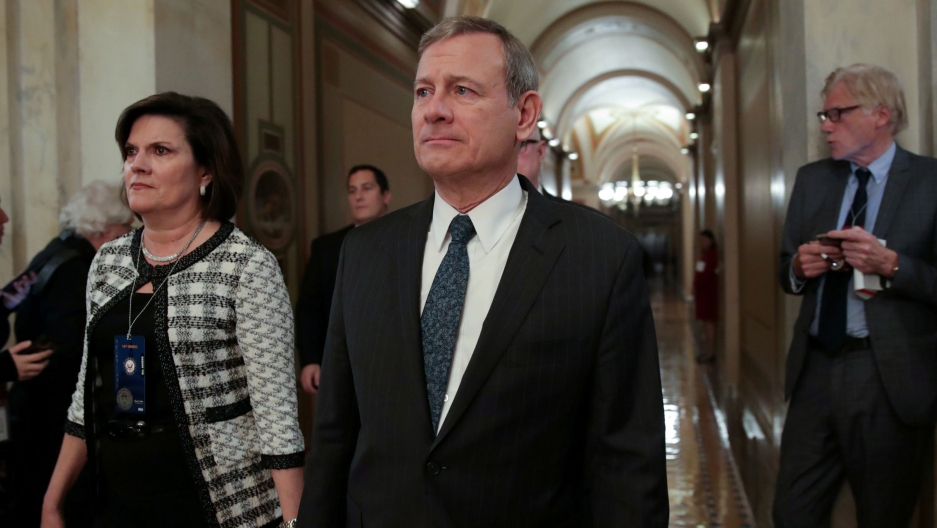 Chief Justice of the United States John Roberts departs after presiding at the Senate impeachment trial of US President Donald Trump at the US Capitol in Washington, DC, Jan. 28, 2020.

Conservative US Chief Justice John Roberts always looked unlikely to become the hero for liberals at President Donald Trump's Senate impeachment trial that some of them had hoped for. He turned out to be a mere bit player in the drama.

Some Democratic senators, liberal activists and commentators had wanted Roberts to play an active rather than a largely ceremonial role in the historic proceedings, perhaps even summoning witnesses despite opposition from Trump's fellow Republicans who control the Senate.

The Senate is scheduled to vote on Wednesday on whether to convict Trump and remove him from office on two articles of impeachment passed by the House on Dec. 18 accusing him of abuse of power and obstruction of Congress. Acquittal seems assured, with a two-thirds majority needed to convict and Trump's fellow Republicans holding 53 of the 100 Senate seats.

Roberts' role was defined more by what he refused to do than what he actually did do. For example, responding to a query from top Senate Democrat Chuck Schumer, Roberts said it would be "inappropriate" for him break a 50-50 tie vote during the trial. Such a tie never occurred.

Under Senate impeachment rules, Roberts read aloud questions posed by senators. But Roberts would not read aloud Republican Sen. Rand Paul's query that named the purported whistleblower whose complaint within the intelligence community about Trump asking Ukraine to investigate Joe Biden and other Democratic rivals triggered the House impeachment inquiry.

"The presiding officer declines to read the question as submitted," Roberts said.

The US Constitution assigns the chief justice the job of presiding over impeachment trials. The presiding officer role lacks much authority so there was little Roberts could have done even if he had wanted to, said Sarah Binder, a scholar at the Brookings Institution think tank.

"On the other hand, just by hewing to the traditionally minimalist role of presiding officer, Roberts did help bring a swift end to the trial," Binder said.

Roberts, 65, is a reserved and mild-mannered jurist who held posts in the administrations of two Republican presidents before becoming a solid conservative vote on the Supreme Court. He seemed temperamentally ill-suited for a power grab during the trial, although he has on occasion voted with the court's liberal wing and in 2018 rebuked Trump over the president's criticism of judges who have ruled against him.

Democrats and liberal activists sought to put Roberts on the spot during the trial. Senators rejected along party lines a Democratic-backed measure that would have let Roberts issue subpoenas for witnesses and documents.

Democratic Sen. Elizabeth Warren, seeking her party's nomination to challenge Trump in the Nov. 3 election, put Roberts in an uncomfortable position with a question she had him read.

"Does the fact the chief justice is presiding over an impeachment trial in which Republican senators have thus far refused to allow witnesses or evidence contribute to the loss of legitimacy of the chief justice, the Supreme Court and the Constitution?" Warren asked in the question read by Roberts.

Roberts, via a court spokeswoman, declined to comment on his experience in the trial.

Liberal legal group Demand Justice at one point bought an online advertisement asking people watching the trial to call the Supreme Court's offices and "tell John Roberts: Do your job." The group said 5,000 such calls were made.

The lobbying did not appear to pay dividends. Senator Lisa Murkowski, a moderate Republican who Democrats had hoped would join them in seeking to call witnesses, ended up voting to end the trial without allowing testimony. In a statement, Murkowski condemned the effort to "drag the Supreme Court into the fray, while attacking the chief justice."

Chris Kang, a lawyer with Demand Justice, said, "At the end of the day, Chief Justice Roberts did nothing to ensure a fair trial. From that perspective, it's unfortunate."

The focus on Roberts' role, Kang added, shows "he's not the impartial, apolitical chief justice that he puts himself out to be. We definitely put a dent in that image."

NBC's long-running comedy show "Saturday Night Live" addressed liberal disappointment at Roberts on Feb. 1 with a skit called "The Trial You Wish Had Happened" that opens with the chief justice being kicked off the case.

"This court," his mock replacement intoned, "needs a real judge."