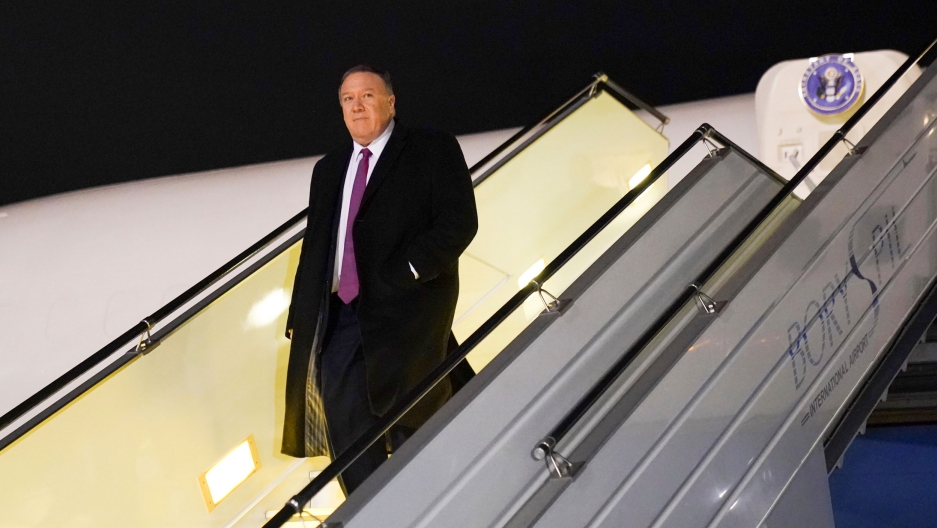 US Secretary of State Mike Pompeo flies to Ukraine today and the timing is — awkward.

In Washington, DC, senators are continuing a question-and-answer session in the impeachment trial of President Donald Trump. At the center of the trial is the president's actions towards Ukraine, and whether or not withholding aid to Kyiv in exchange for an investigation into his political rivals should result in Trump's removal from office.

Pompeo's trip to Kyiv, continuing on to Central Asia, was postponed in the midst of escalating tensions with Iran. His visit now comes after a contentious interview with NPR in which Pompeo asked reporter Mary Louise Kelly, “Do you think Americans care about Ukraine?” The US policy toward the region has often been contradictory, with the Trump administration's often conciliatory attitude toward Russia.

The secretary of state will meet with Ukraine's President Volodymyr Zelinskiy tomorrow. The word from Kyiv is that Zelinskiy and his team are hoping their meeting with Pompeo gives only positive results.

Evelyn Farkas served as deputy assistant secretary of defense for Ukraine, Russia and Eurasia during the Obama administration and is running for Congress from New York State. Farkas spoke with The World's Marco Werman about the implications of Pompeo's Ukraine trip.

Marco Werman: What do you make of the timing of Pompeo, his trip to Ukraine today, everyone at the height of impeachment?

Evelyn Farkas: Well, I suspect this was probably in the works before, so Sec. Pompeo ... could not have predicted that he would behave so impolitically towards an NPR reporter, which I suspect we'll get to later, on the topic of Ukraine. But second, of course, coming in the middle of impeachment, it's quite odd. Again, probably this was on the books earlier. And it's coming, I would say, at an awkward time. I'm not really sure what he's trying to highlight by going there, except probably he'll talk about corruption because this administration is trying to hide what the president did — which was ask for a bribe from the president of Ukraine — under the subterfuge that our president cares about corruption in Ukraine.

Pompeo actually had to postpone its trip to Kyiv early this month. He was focusing his attention on Iraq. So you worked on Ukraine issues during Obama's administration. What do you make of the US-Ukraine relationship right now?

I think it's troubled. Its foundation is still pretty good, I would argue, because the reality is that the support for Ukraine is solid. So the members of Congress on both sides of the aisle are solidly in support of Ukraine. They understand what's at stake, even though they're playing this game, which is dangerous to Ukraine because it's creating the impression that we're not behind Ukraine in a bipartisan fashion if you follow. So there's there's a bit of a theater going on in Congress. Underlying that, I think the US policy remains the same. This secretary of state again, now, is straddling between the shadow foreign policy of President Trump and the actual foreign policy of our country, if you can follow that, as convoluted as it sounds.

Related: Is Trump a better friend to Ukraine than Obama was?

Well, no, I do follow it. And that exchange you mentioned between Pompeo on that NPR reporter, my former colleague here at The World, Mary Louise Kelly, included his comment that Americans do not care about Ukraine, although he's walked those comments back since then. Right. Does he have a point?

Well, I think, first of all, there are about a million Americans of Ukrainian descent. So I think they care about Ukraine. But I think seeing the patriotic Americans testify on the Hill, you know, Fiona Hill, Masha Yovanovitch and others, talk about why we're in Ukraine, why we're supporting Ukraine — it's about democracy. So I think Americans who are paying attention understand that we have to stand up to Vladimir Putin and the autocrats and we have to stand up against the autocratic tendencies of this president. I mean, that's why I'm running for Congress. That has brought people like me to the point where we're getting political because this is about democracy.

And Evelyn, you're credited with sounding the alarm on Russia's interference in the 2016 elections. What's changed for you since then? How do you make sense of what's going on in US politics right now?

Right. So I rang the alarm. I was really one of the first to go on national television and say, this is wrong and the American people and Congress need to wake up and pay attention. This campaign, the Trump campaign at the time, was obviously out in broad daylight encouraging the Russian government to interfere in our elections. Of course, we've learned since that it was worse. And even worse, as a sitting president, this president has encouraged Ukraine, tried to get Ukraine involved in interfering in our elections. Now, thankfully, the president of Ukraine wasn't buying it. He didn't want to get involved, even though — to my mind, the way I interpreted it — is that he pretended he would try to help President Trump because he didn't want to offend him. But in effect, he said, no. The Ukrainian government did the correct thing, unlike the Russian government, which is continuing to tamper in our elections even by trying to make Ukraine a pariah in the United States.

Related: How the State Department carries on amid 'failure of leadership'

Right. I mean, so why is Russia doing this? I mean, is it to just keep Ukraine at bay and out of the EU, or to keep a Democrat out of office? What's the grand scheme?

Yes, Russia wants a weak America. Russia wants an America that will not stand up next to Ukraine and prevent Russia, basically, from politically annexing Ukraine. Russia is still killing Ukrainians in eastern Ukraine. There is a full-on war going on there — maybe not full-on, its lower level conflict. But nevertheless, people are dying. The Russians are to blame. They are still occupying Crimea, which is illegal. And we aren't doing enough to stand up for our ally, Ukraine. That's the problem. President Trump, instead of pointing to Ukraine and saying, oh, no, they were corrupt and I was trying to help them, he should be standing up and saying, Russia, get out of Ukraine's backyard. Move your military forces out. Move your equipment out. Move your proxies out.