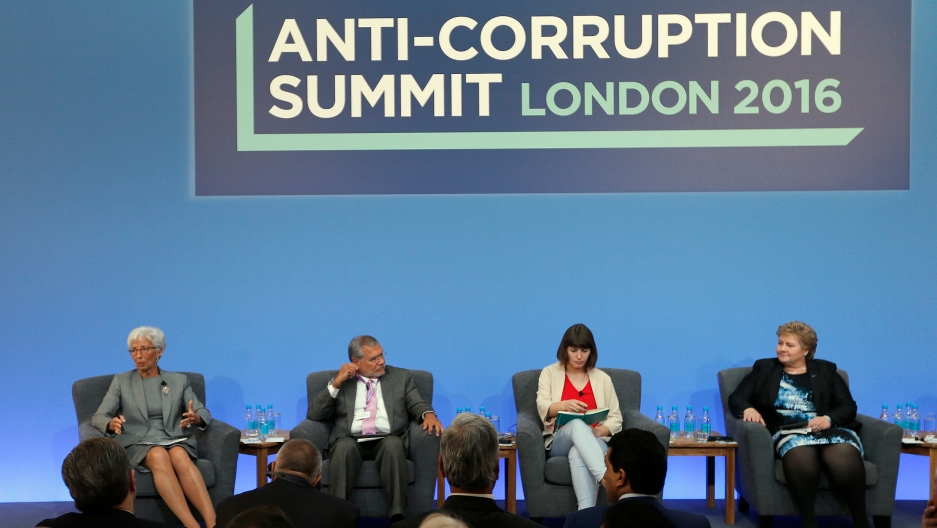 The impeachment trial of US President Donald Trump centers around the allegation that Trump and his associates worked to withhold defense aid to pressure Ukraine to launch an investigation into the president's political rival, former Vice President Joe Biden, and his son, Hunter.

The president and his defense team, however, have argued that Trump withheld nearly $400 million in security assistance because the president was concerned about corruption in Ukraine.

However, according to a recent report by the Government Accountability Office, the US Department of Defense certified that Ukraine met certain “defense institutional reforms” two months before the Office of Management and Budget officially put a hold on aid, undercutting the argument that corruption was a major concern for the administration.

But Ukrainians themselves have worked to pursue significant anti-corruption measures in the country. The 2014 Revolution of Dignity, or Euromaidan, ousted treasonously corrupt President Viktor Yanukovych, and Ukraine's recent elections have ushered in younger politicians running on an anti-corruption platform, including current President Volodymyr Zelenskiy. Activists have long looked to the US as a model for building robust democratic institutions, but in the face of a partisan impeachment trial that highlights connections between money and power, many are feeling let down.

Daria Kaleniuk is the executive director of the Anti-Corruption Center in Ukraine. She spoke to The World's Marco Werman about her frustration with what she sees as political attacks on anti-corruption efforts in the US.

Marco Werman: Daria, you founded the nonprofit, the Anti-Corruption Action Center in Ukraine, after the Euromaidan revolution in Kyiv in 2012. What is it like for you now to see Ukraine in the middle of this impeachment saga in the US?

Daria Kaleniuk: The most important principle from the United States was that criminal justice institutions should not be influenced by external powers. Politicians should not dictate what kind of investigations prosecutors should open or close. And therefore, it came to me as a huge disappointment and surprise, the fact that the president of the United States and his allies, specifically Rudy Giuliani, were expecting from Ukrainian newly elected President Volodymyr Zelenskiy to actually interfere into the work of the Ukrainian prosecutor general office and to pursue a very specific investigation, which would favor political interests of these people in the United States.

So, those original efforts to fight corruption — those efforts you were undertaking in tandem with this reliable partner of the United States — do you feel let down? Do you feel angry?

I feel that there are still many good public servants who are trained to be a reliable partner and who are a reliable partner for Ukraine. However, these public servants in the United States are not necessarily receiving proper political support and protection. And that makes me very angry, because those who are telling the truth and those who are protecting, actually, the national interests of the United States from Russian disinformation and from the corrupt kleptocrats, from oligarchs, they are under attack in their homeland. And this is what makes me angry.

So, I imagine you're thinking of people like the former US ambassador to Ukraine, Marie Yovanovitch.

Yes. First of all, I'm thinking about Marie Yovanovitch who was the face of the US government ... and who was very blatantly attacked from different sides. And she had to suffer because she was trying to protect the national interests of the United States and to keep the relationships between Ukraine and the United States in order to resist Russian aggression and to build the rule of law in our country, in Ukraine.

I think it is insulting to Ukraine because when we try to expose corruption in Ukraine, when we name and blame public officials who are corrupt, and at the end we see them buying influence in the United States, buying connections to decision-makers in the United States, it indicates that basically the most corrupt people in Ukraine can whitewash their reputation, simply pouring their dirty money into into the United States. And I think that this case also highlights the weak part of American democracy. And this weak part — this is the system of lobbyists, lawyers, PR firms who are very eager to take dirty money from the most corrupt people in the world.

Are you talking about PR firms in the US, in Washington?

Yes, I'm talking about lobby firms, PR firms and lawyers in Washington. And some of these PR firms who are also attacking our organization, which I could never believe could happen.

Blue Star Strategies — this is the PR firm from the United States, which had an order to discredit our organization.

Editor's note: In December, the Senate Homeland Security and Governmental Affairs Committee and the Committee on Finance requested information related to Blue Star's work with Burisma Holdings, the Ukrainian energy company employing Hunter Biden. Blue Star Strategies did not respond to a request for comment by The World.

There are a couple of so-called conspiracy theories that keep popping up in the impeachment trial. I know you've been vocal about disproving them or putting them down, including the accusation that Ukraine meddled in the US elections in 2016. Why do you think some Republicans keep bringing this up?

The only reason behind that is political. I started to notice active spread of the message on Ukraine interference into American elections already in 2017. No one cares now about truth. Everyone cares about political interests. And this is what annoys me. We have to fact-check disinformation, presenting facts. But I have a feeling that a lot of politicians in the United States don't care about facts and it basically demotivates me a lot. Why spend so much ... to present facts and present truth if truth doesn't matter?