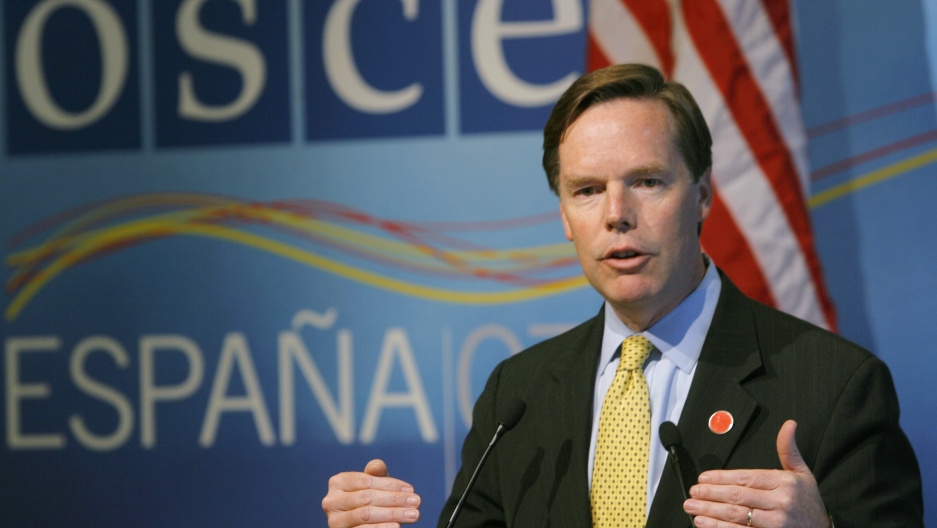 Nicholas Burns, then US undersecretary for political affairs, gestures during a news conference at the end of the Organization for Security and Co-operation in Europe (OSCE) ministerial meeting in Madrid, on Nov. 30, 2007.

The impeachment trial of US President Donald Trump is set to begin in the Senate on Tuesday. The White House has said it wants a swift conclusion to what Trump calls a "hoax."

The president's troubles are rooted in an unprecedented, rogue approach to US foreign policy and diplomacy — specifically, Trump's pressuring of Ukraine to investigate his political rival, former Vice President Joe Biden, and his son Hunter Biden, in exchange for US military assistance. Impeachment and diplomacy have morphed into a single conversation as the impeachment saga has unfolded.

Marco Werman: The State Department has been thrown into this weird situation here during this impeachment process. And while US diplomacy is going to carry on as best it can, it's hard to see how this is just business as usual. How is the State Department managing to function these days?

Nicolas Burns: This is a very tough time for the State Department. Not only did President Trump try to cut the budget by one-third and add one-quarter in the last two fiscal years, you saw back in October during the House impeachment inquiry, five Foreign Service officers were called to testify. They were all told by the State Department leadership, "Don't testify in the White House." They all showed up, and they all said the subpoena was more important. Their constitutional obligation to Congress was more important. And as a Foreign Service officer myself, now retired, I just felt proud of them. And I think it was a defining moment for this generation of Foreign Service officers that they did fulfill that mandate.

Related: Trial in the Senate: Where does impeachment go from here?

We're talking about people like former Ambassador Marie Yovanovitch to Ukraine and Lt. Col. Alexander Vindman. What kind of support were they getting from State Department colleagues? Were you kind of privy to any of that?

Well, I think the rank-and-file of the State Department was very supportive of Ambassador Yovanovitch, Ambassador Bill Taylor, George Kent, who all testified. I think most people felt it was their responsibility to do so. They were not assisted in any way by White House lawyers or State Department lawyers. They were not given access to some of their records. I thought it was courage personified, almost a profile in courage.

Ambassador Yovanovitch, of course, is back in the news, Marco, because of the Lev Parnas revelations. Parnas, an associate of Rudy Giuliani who said he was representing the president of the United States, had a conversation with another American that they would put Marie Yovanovitch, the ambassador of the United States to Ukraine, under surveillance in Kyiv. I can't remember a single episode like this in the history of the United States. And the fact that Mike Pompeo, the secretary of state, did not stand up for three days last week and support her, I thought, was a failure of leadership.

Well, this impeachment trial of President Trump that begins this week is different than the impeachment trial of Andrew Johnson, which was over whether or not he had the right under the law to fire the secretary of war, or the impeachment trial of President Clinton — did he lie under oath? This is a foreign policy issue. This goes to the heart of what the United States is all about. Trying to help an independent nation which has been besieged by and now invaded by Russia to survive, that's a vital issue for the United States. A lot's at stake. And a lot of people feel that the president has not managed this issue correctly on foreign policy grounds. And now, you've got the constitutional issues themselves.

Nick, I'm also curious. We mentioned Col. Alex Vindman, former Ambassador to Ukraine Marie Yovanovitch, apolitical figures who have had long careers and served Republican and Democratic presidents. How much damage has been done to public service through this whole process? And also, what are you hearing from young, up-and-coming diplomats over at Harvard?

Well, there's no question that this has been a difficult time to be in the career military, the CIA, the FBI, the State Department, because President Trump, for three years now, has launched a campaign against what he calls "the swamp." But in an interesting sort of way, I think when those five career ambassadors and diplomats testified — and I think a lot of Americans, Republicans, Democrats, independents, people maybe who don't pay much attention, saw people that were nonpartisan, that didn't appear to have a political axe to grind, who were incredibly impressive. They were smart. And I think, actually, it's made a lot of people recognize we have good people representing us in Washington, DC, and there is such a thing as nonpartisanship. Not everybody is taking sides in the Washington battles.

Some of them are. I mean, a lot of students tend to be liberal these days. Certainly at my institution. And so they may not want to serve in the Trump administration. I say to them, "You've got to serve the country. You've got to serve President Trump as well as future presidents." We desperately need young people to make that choice.

Finally, let's go back to your time as ambassador in Greece, Nick, that was during the Clinton impeachment trials. How did the US manage to keep moving diplomacy forward when all the attention was on the Senate?

It was difficult. If you can remember back to January 1999, the impeachment trial of Bill Clinton was the biggest news in the world. But there were real things happening. The Serb government was trying to annihilate a million Kosovar Albanians that led us, a couple of months after impeachment, to block the Serbs and to go to war against them. Al-Qaeda had just struck, in August 1998, at our embassies in Dar es Salaam and Nairobi, killing nearly 500 people. President Clinton had struck back against them. The world has to go on. And I think it's very important that the American government, that the Trump administration, obviously, keep focused on the business at hand, while this extraordinary, only third in the history of the United States, impeachment trial commences.