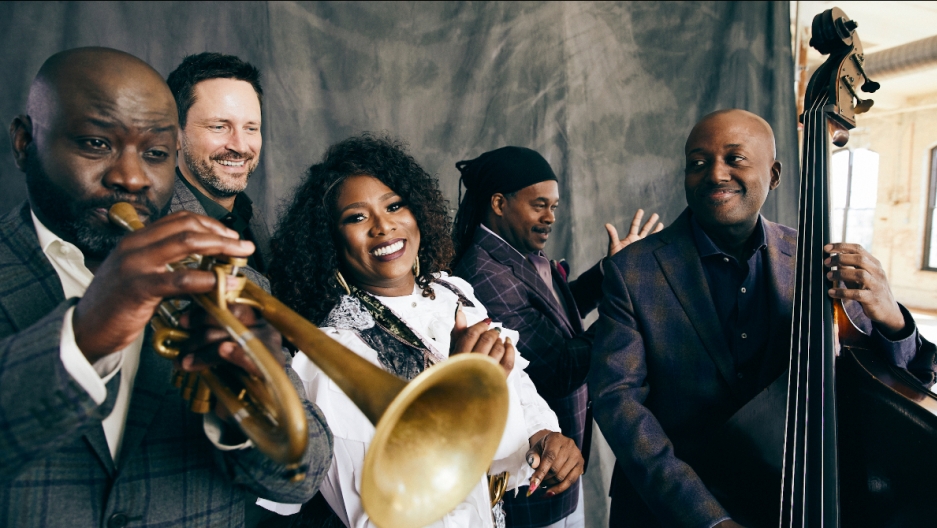 South Carolina’s music ensemble Ranky Tanky is nominated for a Grammy in the Best Regional Roots Music category for their album "Good Time."

Courtesy of Sully Sullivan for Garden and Gun

Update 1/27/20: Ranky Tanky won a Grammy award Sunday in the Best Regional Roots Music Album category. In an acceptance speech in Los Angeles, trumpet player Charlton Singleton said, "It is an honor to be here, to stand on the shoulders of our Gullah ancestry, and bring this music and message to the world! Thank you to the artists and voters and especially to the Recording Academy for this level of diligence and research and this historic moment for Gullah being at the Grammy Awards.”

People in the Carolinas with connections to the Gullah people know the expression "Ranky Tanky." It is a Gullah phrase that loosely translates to "get funky."

That's what South Carolina’s, Gullah-inspired music ensemble Ranky Tanky does on their album "Good Time," which is nominated for a Grammy in the Best Regional Roots Music Album category.

The Gullah, descendants of West African slaves living in the chain of barrier islands that stretch from the southern part of the coastline of North Carolina, into South Carolina and Georgia and the top of Florida, have retained some of the customs, beliefs and language of their ancestors.

Who better than Ranky Tanky to talk about Gullah? Band leader and guitarist Clay Ross along with the group's bass player Kevin Hamilton joined The World’s host Marco Werman in studio.

Marco Werman: First of all, I have to congratulate you on your Grammy nomination. I must feel pretty good.

Clay Ross: Thank you so much. Yeah, we're super honored.

Related: The World's favorite albums of 2019

And you're doing pretty well on the concert circuit. I've seen you once. I know from people who've seen you here in Boston that you wind up the crowd. Boston is not a place where people get up and dance, but you get the people here in Boston to dance. Did you ever think that a regional roots band could get rock star status? Because that's what I feel when I see you guys.

Clay Ross: If ever a regional roots group could have rock star status, it would be because of these guys. I don't know what you think, Kev, are you surprised?

Kevin Hamilton: Yeah, I mean, I'm surprised. But at the same time, though, we all go way back and we've had that kind of response, even locally in town where when we play gigs, you know, it's usually a celebration.

So it's interesting, the Grammys have dozens of categories and you fit into this regional roots music. And when we say regional roots music, we're talking, actually, about a few different regions. There's South Carolina low country, which is defined in large part by Gullah culture, and I know a lot has been written about Gullah culture, but there are still people who don't know the story. Who are the Gullah people and what is the connection between Ranky Tanky and Gullah?

Kevin Hamilton: Well, Gullah as a term, there are different theories about the actual term. They would say that it descends from Angola. But then also, there's a tribe called the Gullah that was also speculated to be the origin of the slaves that came from Africa.

Clay Ross: Yeah, Gullah is essentially the music and culture, the way of life, of the descendants of formerly enslaved Africans in America. It's a very unique and distinct African American culture, an African diaspora culture in the Americas. Because of the relative isolation of the islands, the culture has really survived and thrived in a very distinct way. So it's a real heartland of American music and it's become an informant to all styles of American music — from rock'n'roll to jazz to blues to bluegrass — all of these styles can trace influences to the African American experience and the overall African American experience can track trace roots to Gullah.

I want to get back to that in a minute. But first of all, the isolation of the Gullah people — is the culture preserved that way because of the isolation? Or has there been an overt effort to preserve the culture?

Clay Ross: It's probably a little bit of both. Would you say, Kevin?

Kevin Hamilton: Yeah, especially now more so. There are different societies that do keep traditions alive. As [it's been] coming onto the scene, there's been more attention paid to it. I guess the best way to look at it, honestly, is in the churches of the south, that's really where you see it most of it.

Kevin Hamilton: A little bit of both, I think. When Clay brought the idea to the band, coming from playing together and also from our backgrounds, it's so inherent in what we do anyway that I think the first question we asked was: Why? Why do you want to? Because we were already doing it. Clay in his travels with protestant bands, he was able to see the cultural impact of different types of music being put in different parts of the world. He saw that people didn't really know about where we came from and he saw the beauty in what we do, and his idea was to bring us together and play, maybe, 10 shows a year and have a little showcase. But then also on top of that, it was conscious and unconscious. We're going to do it anyway because that's how we play and how we interact. But at the same time, it became a mission, once you saw the reaction of people and how people wanted to share their stories with us. It was kind of hand-in-hand, it's the best answer I can give.

Clay Ross: Yeah, I also think that there is an inherent integrity that happens when we play together and the values that we all strive for and that we all hold. I think that because the people that are involved in this project are among the most respected artists in our community and they work very hard to champion everything that they do in music with very strong integrity, it is going to happen by default that we're going to honor this music and the culture of the descendants that are in this band with integrity. And even as close as I am to it, as a disciple of the music and not a descendant of the culture, I brush up against it sometimes and I find myself maybe offering some ideas that aren't OK with everybody. And everybody makes it clear, it's in love, but yeah, that's not going to work, because that's maybe not how we do it in the culture.

Kevin, do you have Gullah roots?

Kevin Hamilton: I do. But the running joke in the band is actually that while I have that background, I was raised Catholic. So, there is a part of it, when I play and interact with other guys in the band like Quentin and Charlton, I get it, we have a connection that way. But I wasn't necessarily raised with all of the songs in the hymns. I heard it more like second-hand through other sources, but I don't go to church that way.

Right. The music that you play today, is there anything in there that you can refer back to from your childhood? Or is it kind of is your background so disperse that it's hard to pin things down?

Kevin Hamilton: It's a little bit of both. Take a tune like "Stand by me," there are definitely things that are with this Gullah, you know, the clap, the actual rhythm, the accents, even the title of the tune, and I can trace that back to just certain things I've heard growing up. It's almost like a vernacular speech like talking to my grandmother or something, there's just a certain rhythm to it.

So "Stand by me," that's a tune that you often perform. Take us even further back because it might be hard to hear similarities between "Stand By Me" and songs from West Africa. Have you ever done a side by side comparison between traditional Gullah music and, say, cultures in West Africa? Their music, like in Sierra Leone or Angola, which is more Central Africa. Do you hear anything in there?

Clay Ross: Big time. Honestly, that's what brought me to the idea of wanting to do this project. It was a journey. It's this huge circuitous journey in my life, in music. And when Quentin and I play these rhythms, and Kevin, it's like a wonderful synergy happens. It's beautiful.

We don't have the drums, but we do have Kevin, you're the bass player and you [Clay], you're guitars. But I wonder if there's some kind of percussive, acapella thing that you could do just to illustrate the most basic rhythm that might connect us back to the African continent.

Clay Ross: Yeah. I think that the core rhythm that you'll hear — and you hear this in so many cultures — you hear it in Argentinian tango, you hear it in Brazilian Baiao, you hear it in music in Morocco as well, all the way in the far East, and it's just a simple syncopated beat. You know, you could hear a style of music called Coco from Brazil. It's a shared human language.

It's fantastic. So I've just learned that Ranky Tanky day in Charleston is official, it's a thing. It's Dec. 17. I also saw that both of you are graduates of the College of Charleston, as well as Quentin Baxter. They're pretty chuffed by your Grammy nomination. I know you're both New Yorkers now, but what is it like when Ranky Tanky plays in Charleston? Do you get a lot of people from the Gullah community turning out, and what's that scene all about?

Kevin Hamilton: Yeah, yeah. On one side, in fact, it gets to a point where we can't have enough shows, really. On one side, you have an older crowd, people that are into cultural artists, that kind of thing. But also, we played recently in a [music] festival — it was a huge, young crowd and they were just as enthusiastic.

Related: Teju Cole on Malian Music: 'It is ancient, majestic, but it is also utterly contemporary'

Kevin Hamilton and Clay Ross from Ranky Tanky, thanks so much. Good luck to you. And it's great to see all the success for you guys.

Clay Ross: Thanks, Marco, we are big fans. Thanks for having us. Thank you.