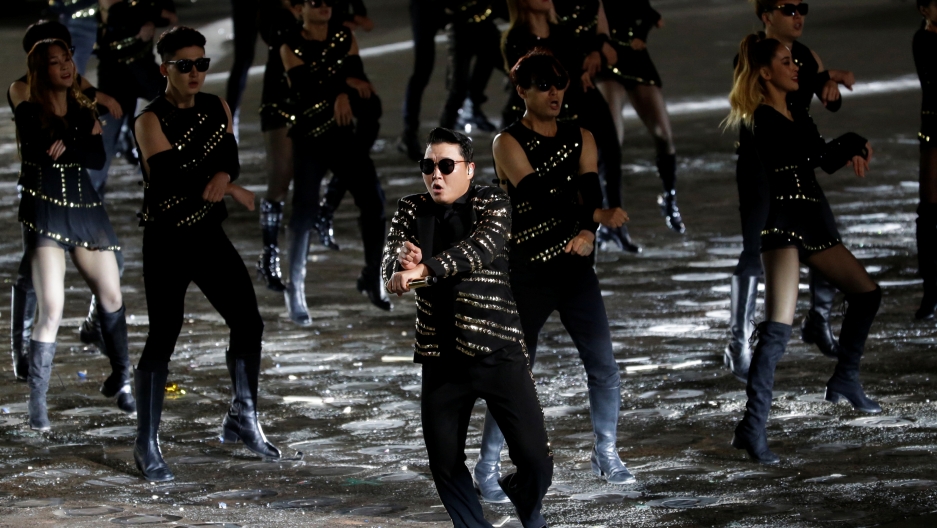 South Korean rapper PSY performs during the 70th anniversary of Armed Forces Day at the War Memorial of Korea in Seoul, South Korea, on Oct. 1, 2018.

In the final days of the decade, The World has given some thought to the musical trends that have really stood out over the past ten years.

As a new decade began in 2010, who’d have thunk that Korean boy bands would conquer the globe? There was a big clue back in 2012: His name was Psy.

Yeah, a surreal video by a cute chap named Psy, dancing and singing about the lively upscale neighborhood in Seoul that most of their fans outside Korea had never heard of. Four years after "Gangnam Style," boy band BTS sold-out Madison Square Garden several times. Sadly, the decade is closing with several deaths among the top acts in K-pop, but production by Seoul's star-maker machinery does not seem to wane.

2. How we listen to music

Across the planet, actually owning music gave way toward downloads and streaming, essentially renting time on ginormous digital jukeboxes in the cloud — Spotify, Apple Music, and so on. In some parts of the world, street merchants sell SIM cards and thumb drives already loaded with music. But the big change was in the actual physical product — a retro-swing back to vinyl.

"We have the luxury to be able to choose our medium in a way that cherishes the experiential aspects of it. Basically, picking up a record, pulling it out of the sleeve, putting it on the turntable. Being very intentional. It's something that holds a lot of romance for younger kids and for older people it's very nostalgic. It's that sweet spot."

As the decade comes to a close, vinyl sales actually topped CD sales for the first time in thirty years in the United States. Ayana Contreras, host of the music show "Vocalo Radio" at WBEZ in Chicago says, for her, it makes perfect sense. "We have the luxury to be able to choose our medium in a way that cherishes the experiential aspects of it. Basically, picking up a record, pulling it out of the sleeve, putting it on the turntable. Being very intentional. It's something that holds a lot of romance for younger kids and for older people it's very nostalgic. It's that sweet spot."

As for crackles and pops? Vinyl sounds better than ever.

Internet and file-sharing mean that artists everywhere no longer toil away in the vacuum of regional culture. Everything around the globe inspires now. Look specifically at the African continent over the past ten years, long the source of many sounds simply called "world music." That all-encompassing label gave way to a distinct 21st-century genre of pop music. In fact, there's a new sales chart that didn't exist in 2010: ChartsAfrica.

Music producer Joe Boyd helped coin the term "world music," but even he told us back in 2017 that the term has "outgrown its usefulness."

A perfect illustration of how world music imploded can be found in the aforementioned ChartAfrica's top 10 albums this year. You'll find only two artists that were once labeled as world music: Angélique Kidjo and Sauti Sol. The rest of the list belongs to millennial artists who are fueled more by auto-tune and cut-and-paste aesthetics than they are clave or traditional percussion. At number one, for example, is "African Giant," by arguably Nigeria’s biggest star of the moment, Burna Boy. Definitely not Afropop, even though it's pop from Africa.

Related: How singer Angélique Kidjo defied the odds to succeed

There have been artists like Seun Kuti who warned his fellow Nigerians not to get sucked into a consumer lifestyle in songs like “African Dreams." And New Zealand’s Lorde had her tune, "Royals," calling out the over-the-top bling.

But for the most part, music came up short over the past ten years to address socio-economic inequality.

"I think then you start to lose the cultural claim on being a democratic art. People call out each other, 'check your privilege,' but the cultural production is not checking its privilege."

"What does it mean when you don't have music or visual art or other forms that don't speak to this?" asked Alissa Quart, who heads up the Economic Hardship Reporting Project. "I think then you start to lose the cultural claim on being a democratic art. People call out each other, 'check your privilege,' they say, but the cultural production is not checking its privilege," Quart told The World. She said that when it comes to a wider musical critique of the global socio-economic inequality that was laid bare after the 2008 great recession and the misdeeds of Wall Street, musicians have largely come up short.

It's a trend that critic and writer Scott Timberg wrote about last year in an essay for Vox titled, "How music has responded to a decade of economic inequality." Scott died unexpectedly this past month. "Scott was a friend and a colleague," Quart said, "and I think he really did worry about cultural production, but he was always an optimist ... he still kept his mind and ear to better work that was being made."

The #MeToo Movement prompted a lot of women to react and write about their own experiences regarding sexism and sexual misconduct. Domestically, Kesha and Taylor Swift were two of the most outspoken female musicians.

Outside the US, Canadian born singer Tami Neilson came out with her album "Sassafrass." She called it that because, as she told us in 2018, a sassy person is someone "who speaks her mind." Her tune, "Stay Out of My Business," became her anthem.

There was also the French-Cuban duo Ibeyi. The duo includes twin sisters Lisa-Kaindé and Naomi Diaz. Right around the time the #MeToo Movement broke, they released their tune, “Deathless.” They wrote it after Lisa's wrongful arrest by French police when she was 16. The song is semi-autobiographical about that experience, but they also claim it's about the enduring power of women.

7. The loss of music innovators

We lost so many great artists in the last ten years that it felt like a trend. Aretha Franklin, David Bowie and Prince — just to name three. They were artists with seemingly limitless talent who stayed true to innovation and boldness. Legacies that show us great art requires hard work.

Brazilian singer Seu Jorge sang this David Bowie classic the day after the 2016 election. In many respects, it neatly sums up the past decade in music — in many areas: