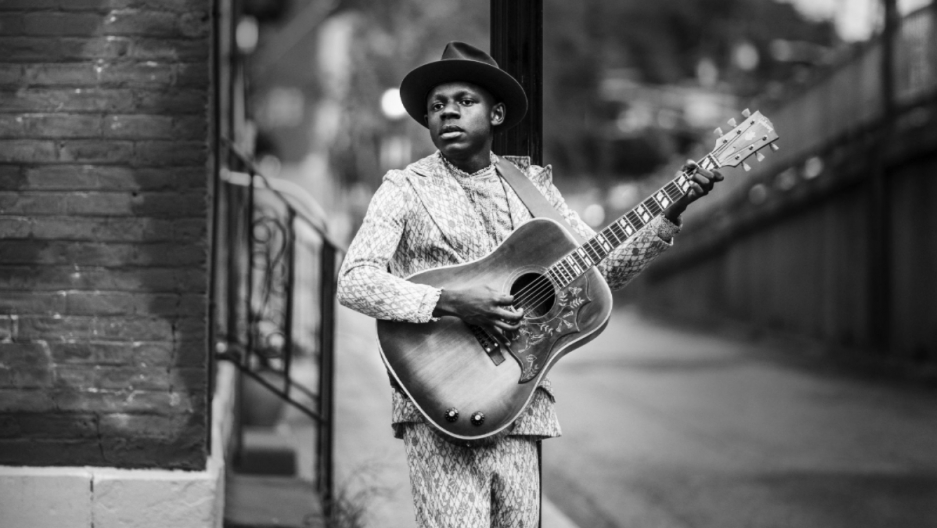 When Kenyan musician J.S. Ondara won the US visa lottery five years ago, he swapped Nairobi for Minneapolis because of his love for Bob Dylan.

Kenyan musician J.S. Ondara is a little cagey when it comes to his initials "J.S."

"J.S. is something of a mystery. It's just, you know, those initials have sort of morphed into very many different things over time,” Ondara, said. “So, it's usually just whatever you want it to be."

J.S. might be a mystery, but when it comes to his personal story, Ondara is more of an open book.

He won the US State Department’s green card lottery in 2013 for residency in the United States. His story begins in Kenya with a dream of coming to the US, reflected in his tune "American Dream."

Related: This Kenyan musician followed his love for Dylan to a new life and career

Ondara's album "Tales of America (The Second Coming)" has been nominated for a Grammy in the Best Americana Album category — one of those categories you probably won't see awarded in the TV broadcast (but The World will keep you updated if he wins).

He spoke with The World’s host Marco Werman about his Grammy-nominated album, and how American immigration policies have shaped his sound.

Marco Werman: Some six years ago, you won the green card lottery. Obama was president, obviously, there was an actual president in the White House with real connections to Kenya, which is even more interesting. What did all that mean to you at the time when you won the [green card] lottery?

J.S. Ondara: It was extremely surreal. Before that, I had spent a couple of years trying to find a way to get here. I did all kinds of things, I applied for work, I applied for schools and, you know, I wanted to come here and make music. I just felt this very powerful calling to do it and I could not ignore it. Eventually, the green card thing happened just out of chance.

So you arrive in the US, you start absorbing the full scope of Bob Dylan, who is kind of a touchstone of American musical culture for you. You dive into other singer-songwriters. You land this major record deal and record an album that's gotten a lot of critical attention. And somewhere in there, Donald Trump gets elected. The opening track on your album is "American Dream," the final track is "God Bless America," which has the line "will you let me in or are you at capacity?" What was on your mind as you were writing these songs?

I think that the times we are in, definitely, were a big part of my headspace, of just being an immigrant in America, you know, being here and seeing the growing intolerance towards immigration and knowing relatives and family and other people in my circles who perhaps haven't been as fortunate as I have been to have this green card. And so, a lot of those issues are quite present in my mind.

Related: The World's favorite albums of 2019

Your album came out, I think, in February and almost answering that question — will you let me in or are you at capacity? — the answer comes from the White House later in the year when Trump said America "is full." What did you hear in that, considering you'd already gotten into the United States?

Yeah, I think I was being mostly empathetic with a lot of people who I knew, some of them personally, who are still trying to make their way with extreme difficulty — in some ways struggling with my fortune and their misfortune. But I think, I could almost in some bizarre way foresee that kind of answer from the president while I was writing that. I was thinking we are at capacity, but we are obviously not. But, I could see that was the narrative that the administration was trying to propagate.

On the deluxe edition of your album "Tales of America," which came out in September, you include several new tracks and in the new sequencing on the album, the final track is a David Bowie composition titled "I'm Afraid of Americans." Why that song? Is the title literal? And what does it tell us about how you now see America?

I've always been very fond of that song. I love David Bowie a lot and it felt like a very poignant song cover to add to [the] record with regard to the times we're [in] at the moment. And I think that the perspective that people have of America right now internationally is this feeling of fear of some sort about America that's, I think, growing. I think that's where my head was at when I was trying to put that in the record.

As we head into 2020, obviously we don't know who the next president is going to be, but what would you like to tell this country, that you had so many hopes about not so long ago, about how it ought to relate to people from other parts of the world?

I think all Americans ought to remember that this country was started by immigrants. I think, America has, over time, put itself up as a beacon of sorts that's leading civilization or something. It's a tall order for anyone to carry, but, I think, someone needs to carry that torch. We should be more conscious about how we are going about doing that.