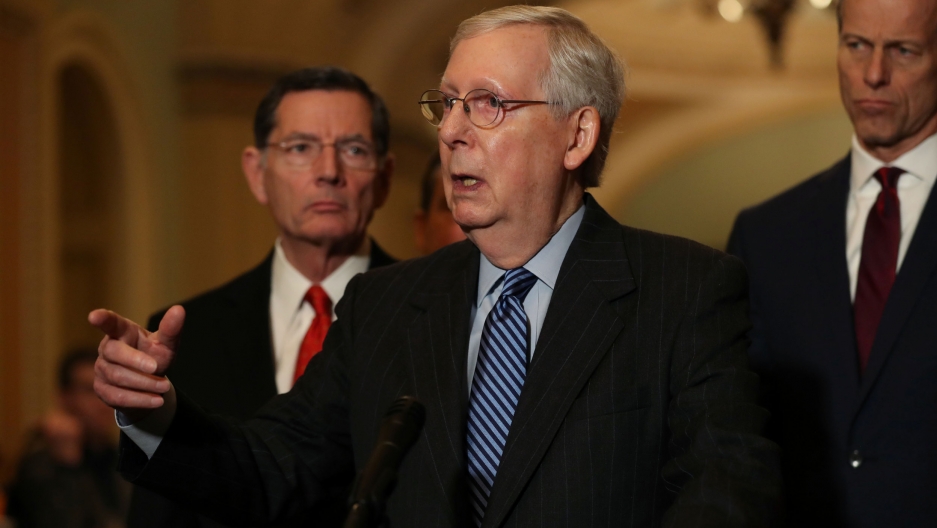 Senate Majority Leader Mitch McConnell said on Tuesday he had enough support from his fellow Republicans to set the rules for President Donald Trump's impeachment trial, dealing a blow to Democrats' efforts to call new witnesses against the president.

Democrats responded by saying they still want more details on the trial process before any further action is taken although they have little leverage if Republicans, who control the Senate, remain united.

McConnell has resisted the idea, instead seeking a fast trial based on evidence collected in the House of Representatives before it voted last month to impeach Trump for abuse of power and obstruction of Congress.

While Republicans are still divided over whether the Senate should eventually hear more testimony, the vast majority of them have agreed to leave the decision until after the trial has started, McConnell told a news conference.

"Obviously, that is the most contentious part of these proceedings and that will be addressed at that time and not before the trial begins," he said.

Sen. Lindsey Graham said at least 51 of the 53 Republicans in the Senate were backing that plan, which he said was similar to an arrangement made during the 1999 impeachment trial of then-President Bill Clinton after Republicans and Democrats were similarly deadlocked over the question of witness testimony.

The House has charged Trump with abusing his power for personal gain by asking Ukraine to announce a corruption investigation of former Vice President Joe Biden, a leading contender for the Democratic nomination to face Trump in November's presidential election.

It also charged the president with obstructing Congress by directing administration officials and agencies not to cooperate with the impeachment inquiry.

Trump says he did nothing wrong and has dismissed his impeachment as a partisan bid to undo his 2016 election win.

House Speaker Nancy Pelosi, a Democrat, has declined to send the articles of impeachment to the Senate, effectively delaying any trial in the hope that Senate Democrats could win support for the introduction of new witnesses and documents that could bolster their case for removing Trump from office.

In a letter to House Democrats, Pelosi said she needed to see the details of McConnell's plan so that "we can see the arena in which we will be participating, appoint managers and transmit the articles to the Senate."

Timeline: How Trump was impeached

Because of the united front among Republican senators, McConnell has emerged as the clear winner of the standoff with Pelosi, Republican strategist Alex Conant said.

"Pelosi started down this pathway without a clear exit ramp, and McConnell just took control of the car," said Conant, who added that the Senate Republican leader was in a position to control the process unless Democrats co-opted four Republicans.

Democratic Sen. Chris Murphy said Democrats needed to decide on their best strategy. "At this point our best leverage is probably inside that trial," he said.

The trial is expected to lead to Trump's acquittal before the 2020 presidential election campaign heats up, as no Republicans have voiced support for ousting him from office. A two-thirds majority of the Senate is needed to vote to do that.

Democrats have argued that Bolton and the other new witnesses must be heard for the trial to be fair.

They had focused their efforts on persuading several moderate Republicans to settle the witness battle before the start of the trial, but had seen "no traction," according to one Senate Democratic aide.

They are now focusing their attention on winning over Republican Senators Mitt Romney and Lisa Murkowski as potential allies during the trial, with the hope that capturing them could spur other Republicans to abandon Trump.

Senate Minority Leader Chuck Schumer said Democrats would force votes during the proceedings to have the witnesses testify and for new evidence to be submitted.

"Make no mistake, on the question of witnesses and documents, Republicans may run, but they can't hide," Schumer said on the Senate floor.

Bolton, who was fired by Trump in September, said on Monday he was willing to testify, although the White House could object.

Other witnesses during the House impeachment investigation testified that Bolton strongly objected to an effort by Trump's personal lawyer, Rudy Giuliani, to pressure Ukraine's government outside of regular diplomatic channels, with one saying Bolton referred to the arrangement as a "drug deal."

Congressional investigators believe Bolton objected to Trump's decision to delay $390 million in military aid to Ukraine and could elaborate on that, a Senate aide told Reuters this week.

Bolton refused to participate in the House impeachment inquiry while the Trump administration and Congress battled in court for access to witnesses and documentary evidence.

When asked on Tuesday if he would be OK if Bolton testified, Trump told reporters at the White House: "That's going to be up to the lawyers. It'll be up to the Senate, and we'll see how they feel."