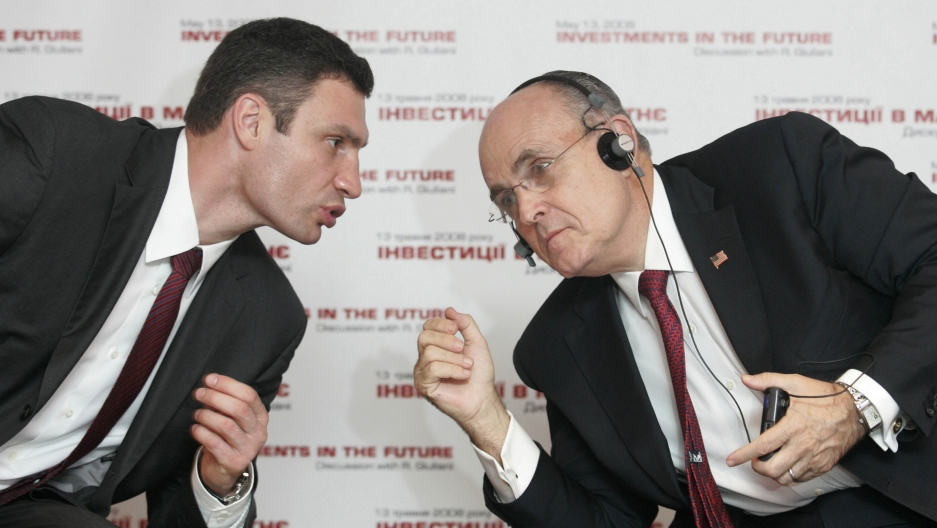 Former world heavyweight boxing champion Vitaly Klitschko (left) speaks to former New York City Mayor Rudolph Giuliani during their news conference in Kyiv on May 13, 2008. Giuliani was invited to Kyiv by Klitschko to support him in a preelection fight for Kyiv's mayoral post.

Former New York Mayor Rudy Giuliani had just come off a failed presidential bid when he went back to work as a private consultant in 2008. Giuliani is now at the center of the impeachment of US President Donald Trump. But more than a decade ago, one of his first clients after returning from the US campaign trail was a towering, 6-feet-7-inch Ukrainian boxer named Vitali Klitschko. Klitschko's former boxing name: Dr. Ironfist.

Klitschko dominated in the ring, winning 45 fights and suffering only two defeats over about two decades. But he lost a bid to become Kyiv’s mayor in 2008, despite Giuliani’s help. Klitschko went on to win a seat in Ukraine’s parliament in 2012 and started his own political party called UDAR (Ukrainian Democratic Alliance for Reform), which aptly translates to “punch.”

Klitschko eventually emerged as a leader in Ukraine’s 2014 Maidan Revolution that ousted former President Viktor Yanukovych, who was deeply corrupt. After the revolution, Klitschko ran for mayor again. This time he won, vowing to battle corruption.

“It’s our main challenge, to destroy corruption,” Klitschko told CNBC in 2014 after his election.

But five years later, there’s skepticism about whether Klitschko has kept that promise. The mayor has been accused of allowing associates to score lucrative construction projects in Kyiv through shady backroom deals. That sort of behavior is exactly what Donald Trump referred to when he claimed the US should withhold military aid from Ukraine because its leaders can’t be trusted.

Still, the instances of corruption coming to light in Ukraine these days aren’t necessarily warning signs of a country moving backward. They’re signs of progress. 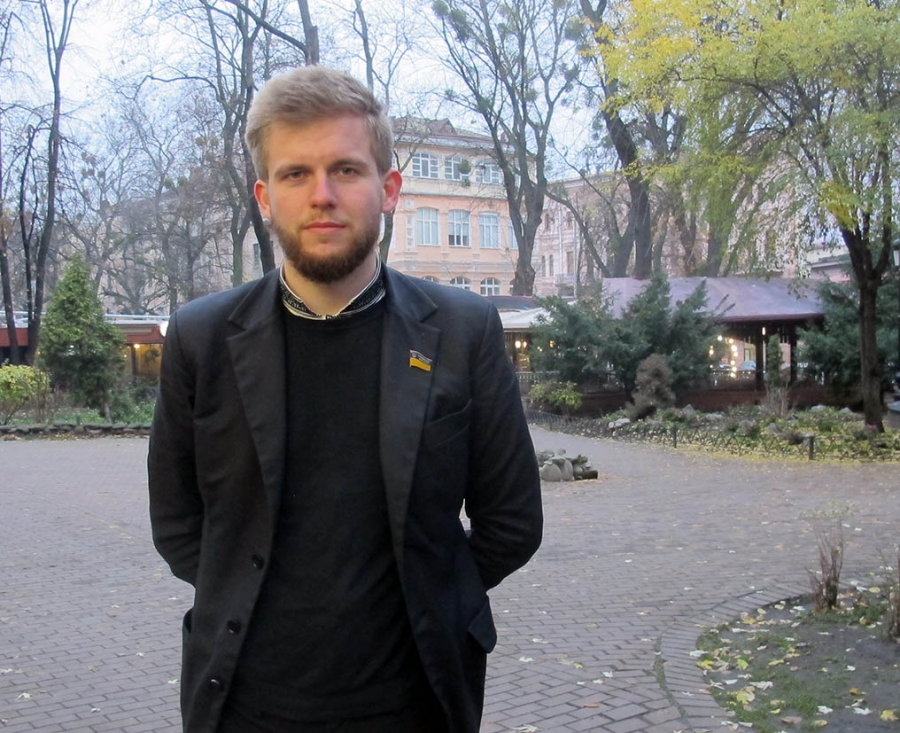 Sviatoslav Yurash, 23, is Ukraine's youngest member of parliament and a member of the Servant of the People party, which has introduced a new generation of outsider politicians.

Daria Kaleniuk, the executive director of the Anti-Corruption Action Center in Kyiv, says corruption problems have persisted in Ukraine because it’s been easy for people with money to buy influence in the courts.

“After the collapse of the Soviet Union, the prosecution office transformed into a supermarket,” Kaleniuk said, referring to an unofficial “price list” for bribes to open or close investigations.

Politicians would often accept money from oligarchs and then use their power to influence judges to go easy on oligarchs when they faced legal problems.

“Oligarchs were investing into politics like startups,” Kaleniuk said.

That tradition of Ukraine’s elite influencing politicians is something many Ukrainians say Klitschko, who has been Kyiv's mayor for the past five years, has failed to stop.

Sviatoslav Yurash, 23, knew Klitschko during the 2014 revolution. Yurash hoped the revolution and emerging leaders like Klitschko would get rid of the old-school, political elites. But he’s frustrated with Klitschko and feels like most politicians who took office after the revolution — in which dozens were killed — failed to change Ukraine.

“We expected a fundamental transformation, which was not realized,” Yurash said, “and that for us is inexcusable, especially after so much sacrifice.”

Yurash channeled his discontent into political action. He ran for office and is currently the youngest ever member of Ukraine’s parliament.

He's also a member of President Zelenskiy’s party, Servant of the People — where many of the party's lawmakers have zero political experience. It’s all part of the Ukranian president’s campaign promise to replace corrupt politicians with a new generation of outsider candidates like Yurash. 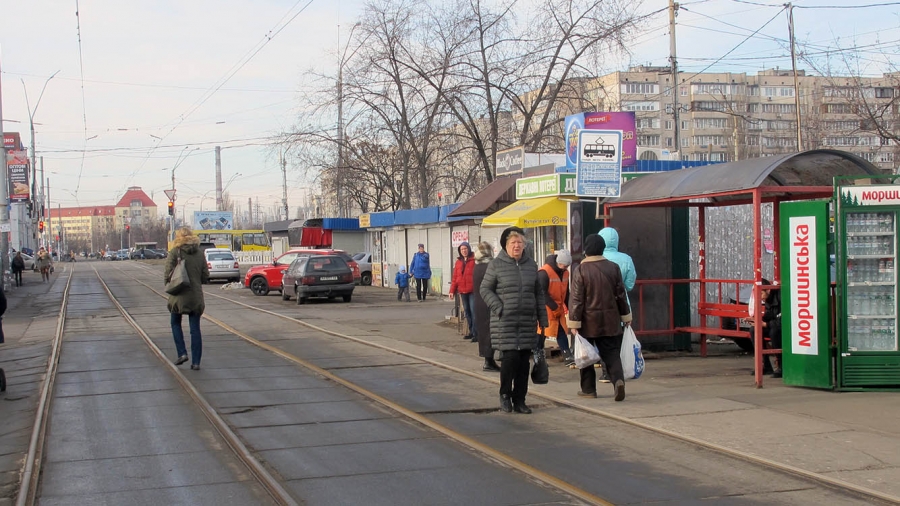 A tram line cuts through a suburban neighborhood in Kyiv. Residents of the capital criticize the mayor for not doing enough to improve local transportation.

Zelenskiy’s party received a majority in parliament — a first for any party in Ukraine’s history. One of their first targets: Mayor Klitschko. Earlier this summer, Zelenskiy’s party took steps to remove Klitschko from a second position he holds as head of the Kyiv City State Administration — the branch of government that represents Kyiv at a national level. His removal would significantly reduce Klitschko’s political power.

Zelenskiy has made other serious advances to stop corruption. A new High Anti-Corruption Court opened in September, which many see as a new chapter in reforming Ukraine’s judiciary. But to some, the process feels slow.

“I haven't yet seen anyone convicted — anyone in the government,” said Leonid Antonenko, a lawyer and member of the Kyiv City Council.

Antonenko is also the chairman of the city’s property commission and says that time and again, he has watched as valuable properties owned by the city were just handed over to folks with ties to Klitschko for far less than their value.

“Once something became vacant, it would very quickly be distributed to the friends of the mayor,” Antonenko said. 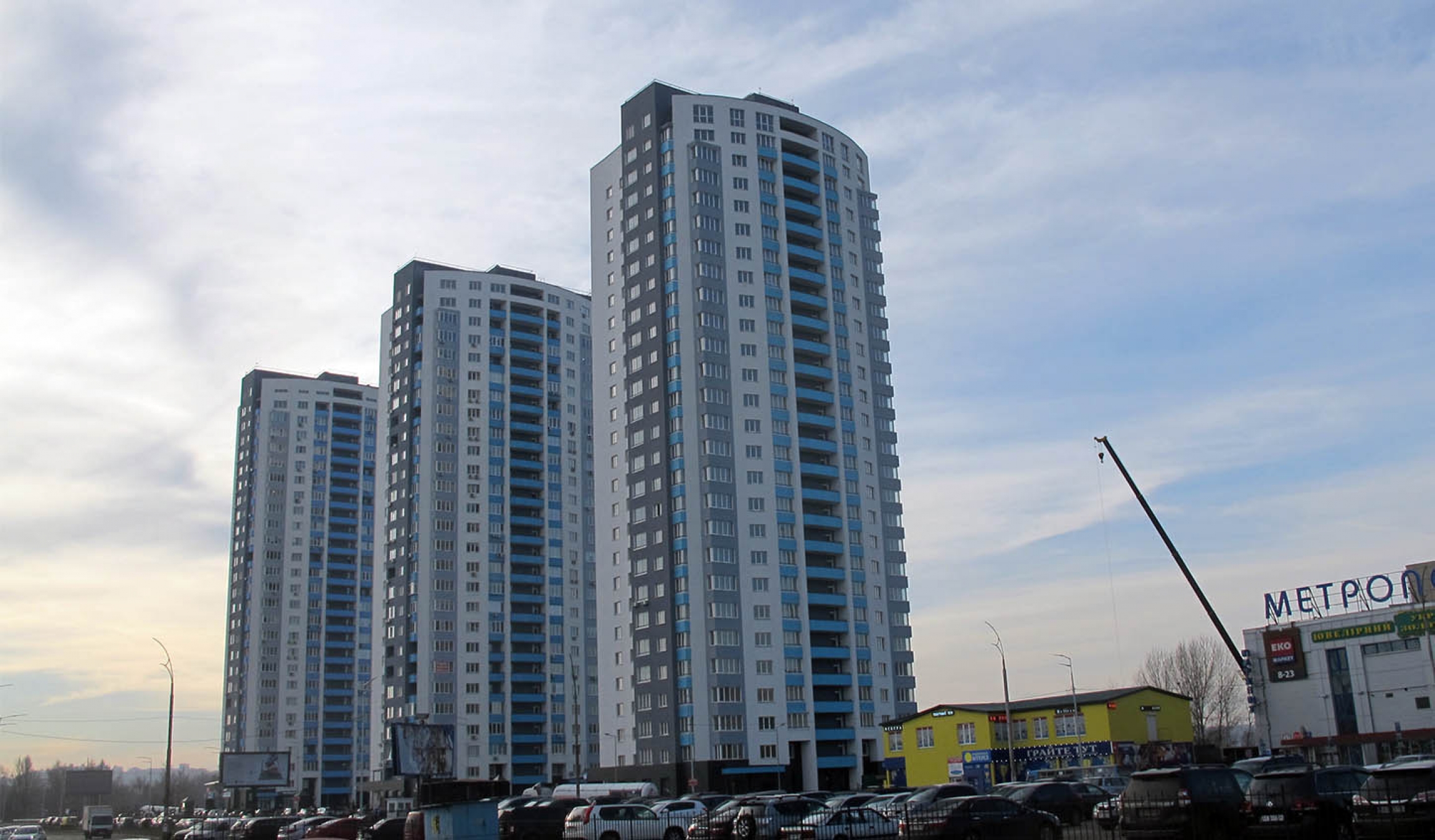 To increase transparency, Antonenko made the city release financial information about city properties — who’s renting them and how much they’re paying. He developed a map-based website to make that information public, so that ordinary citizens have more freedom to access information.

Klitchko declined to be interviewed for this story. But the mayor has asked Ukrainian authorities to investigate Andriy Bohdan, head of the presidential administration, who Klitschko says unfairly accused him of corruption. Some opposition politicians, like Klitschko, say Zelenskiy is meddling in local politics.

“That's something like in Russia can be done,” said Ukrainian lawmaker Olexiy Goncharenko, of the European Solidarity party. “We don't want to live in a country like this.”

After Klitschko began to face the possibility of losing one of his positions in city government last summer, he flew to New York and met again with Rudy Giuliani, who continues to advise Klitschko informally. In a Facebook post dated July 31 — just six days after the now infamous Trump-Zelenskiy phone call — Klitschko called Giuliani his friend and said they’d meet again “next time in Kyiv.”

Zelenskiy’s party still hasn’t taken the final step to remove Klitschko as head of the Kyiv City State Administration. Instead, they’ve drafted legislation that would introduce more checks and balances on the city government. Kaleniuk, the anti-corruption activist, says it feels like there’s real change in the air.

“I think we are close to sending a very clear message to corrupt elites in Ukraine: 'Listen, guys, wherever you are, whatever post you hold in whatever political party you serve or support, if you steal from Ukrainian people, you will go to jail.'”