On a warm fall evening at the Bel Air Crest Clubhouse in Los Angeles, Mandana Vassigh put the finishing touches on displays of fruits and pastries, high school mementos and a glittering sign that read “1977.” Before long, guests arrived in cocktail attire and greeted each other with a kiss on each cheek, giggling and giddy.

But this was not a typical school reunion: Just as this group of students was graduating from high school in Iran, their country was gripped by revolutionary riots. Most of them fled the country as the monarchy was overthrown and Iran came under the rule of an Islamic theocracy.

Now, on the 40th anniversary of the Iranian Revolution, these former classmates said that this reunion — their first in 42 years — took them back to a time and place that felt like a world away.

“We've been together since kindergarten. How many people do you know that are lucky enough to still be friends with their kindergarten friends?”

“We've been together since kindergarten,” said Vassigh, one of the reunion's organizers. “How many people do you know that are lucky enough to still be friends with their kindergarten friends?” 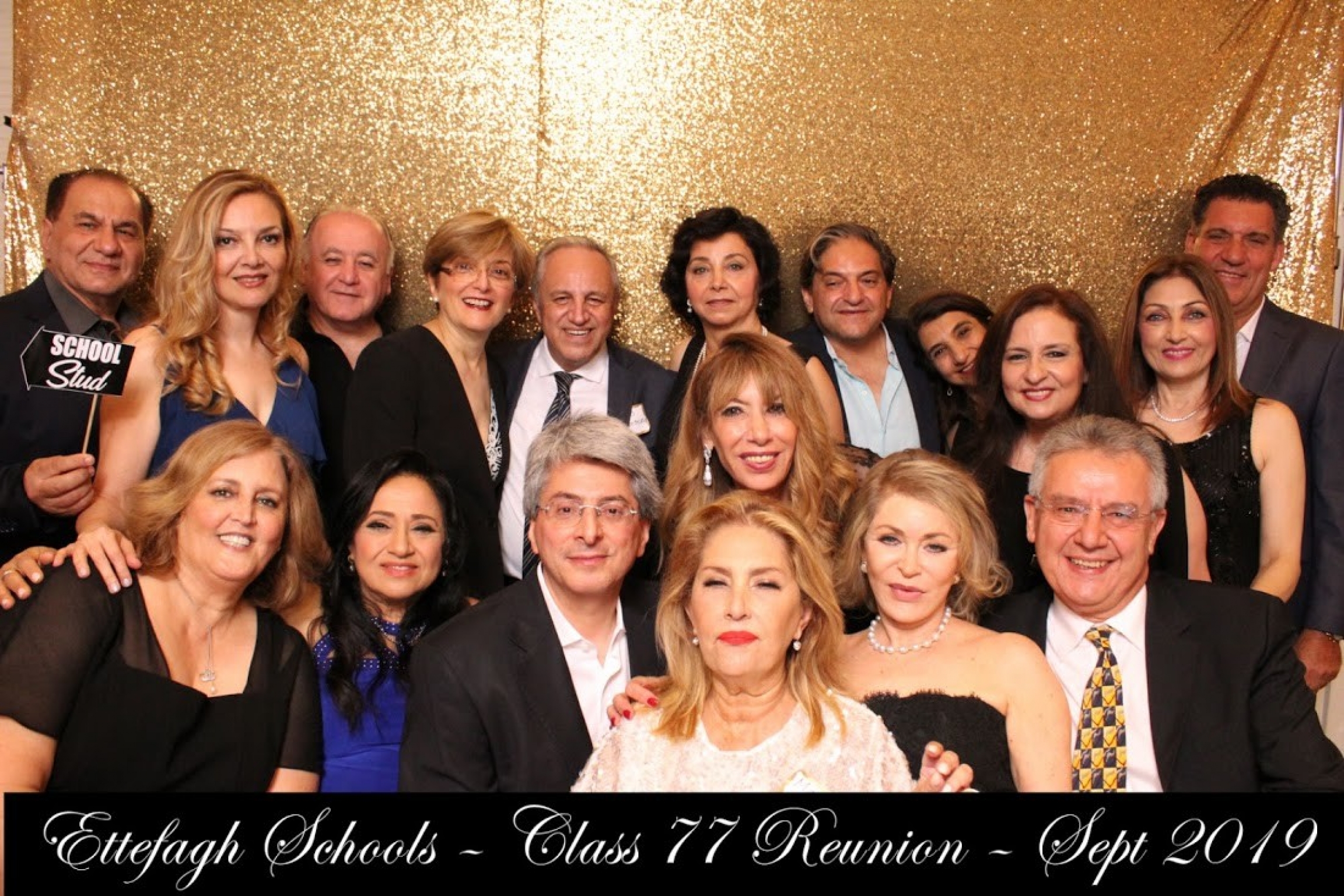 Former Ettefagh School classmates settled around the United States, Canada and Israel after leaving Iran around the time of the 1979 Islamic Revolution. On Sept. 1, 2019, about 50 alumni came from around the world to attend their first formal high school reunion in 42 years.

'Iran is what you see here tonight'

The air was thick with Middle Eastern party music and the thrill of childhood nostalgia as a screen projected black-and-white photos of the alumni during their school days in Iran.

All of the 50 or so partygoers attended Ettefagh School, a private Iranian Jewish school that spanned kindergarten through 12th grade. And full disclosure: I know about it because my mom attended high school there, although she was not part of this graduating class.

Ettefagh was established by Iraqi Jews as a gift to the Iranian Jewish community in Tehran. During the 1970s, the school, which promoted a strong English-language curriculum, became one of the city's most prestigious schools. 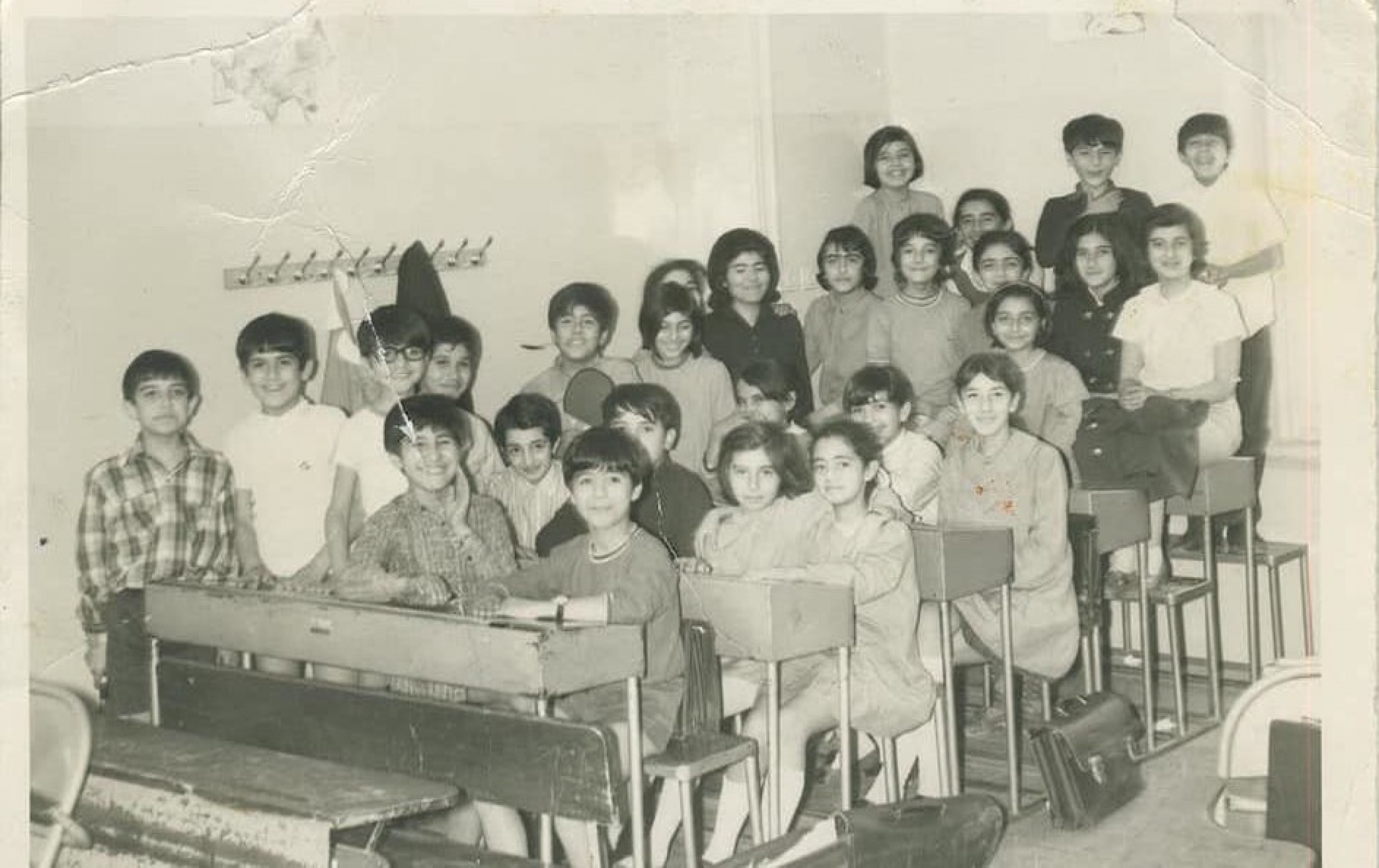 Old black-and-white photos from Ettefagh School were projected during the class of '77 reunion on Sept. 1, 2019.

The school was as much about community as it was about academics. In Farsi, b’Ettefagh means “together."

“I'm actually a good example of that,” said Vassigh, who is Muslim. She explained that in a country where Jews and Muslims rarely integrated, Ettefagh was a place where cultural differences didn’t matter.

“I even carried the Torah in morning prayers when we went to the temple,” she said. “It was just my love and passion for my friends. I never thought of them being Jewish or Muslim, or rich or poor. We were just friends.”

In fact, Ettefagh had students from all of Iran’s religious minorities, including Christian, Baha'i, and Zoroastrian. 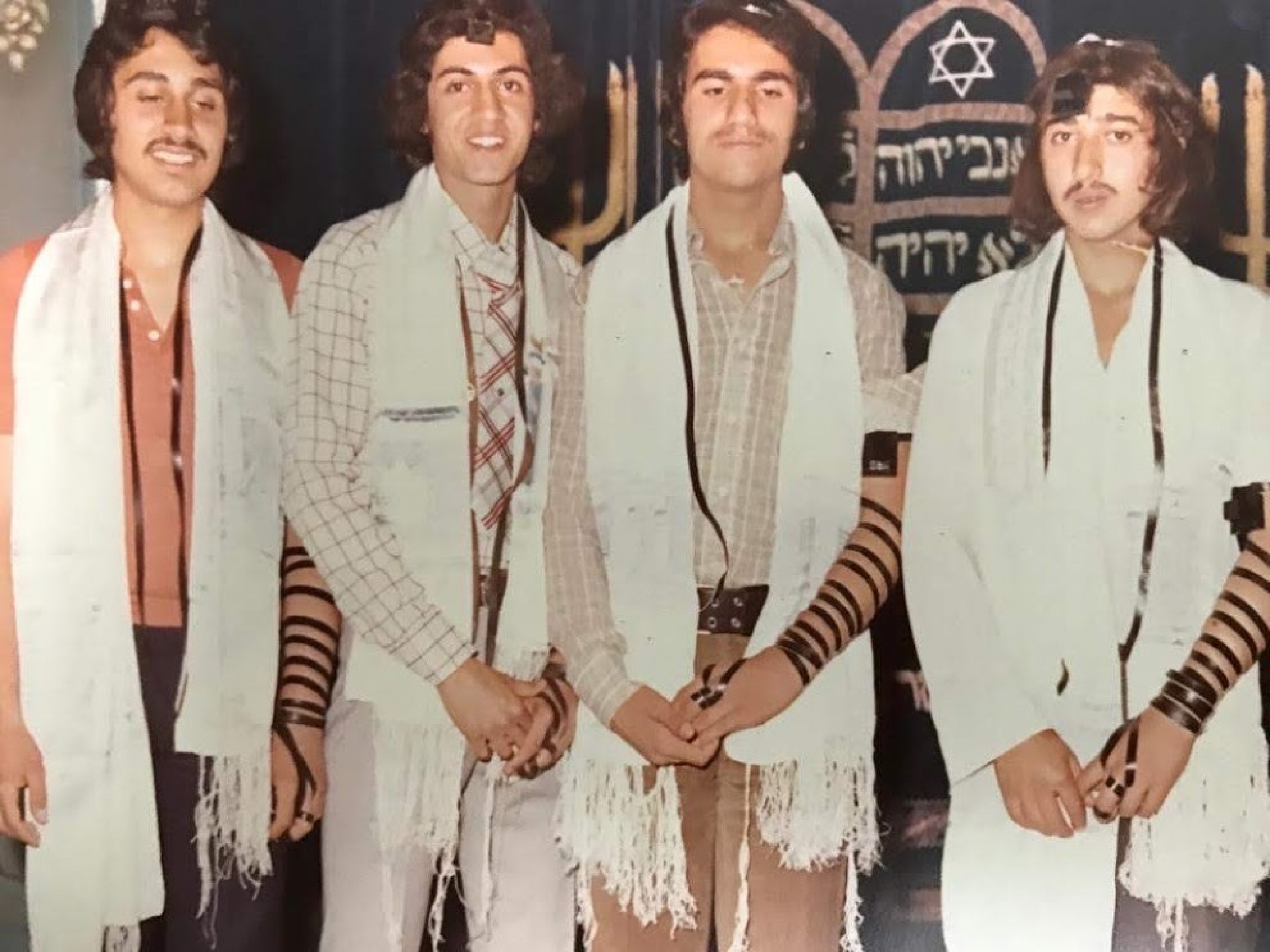 The reunion slideshow included photos of Jewish students in prerevolution Iran. At the time, Ettefagh School had a synagogue, where both Jewish and non-Jewish students attended morning prayers together.

“I just want you to recognize the diversity that you don't see from how intimate we are with each other,” said Mariam Arian, who flew in for the reunion from Houston. “We love each other through and through, and we're here for each other through thick and thin, despite all our differences. The amazing thing is that we all claim to be Iranian, and we are Iranian. Iran is what you see here tonight.”

Ettefagh was also one of the few coed schools in the whole country. Arian credits that egalitarian approach for inspiring her and her female friends to pursue high-achieving careers. 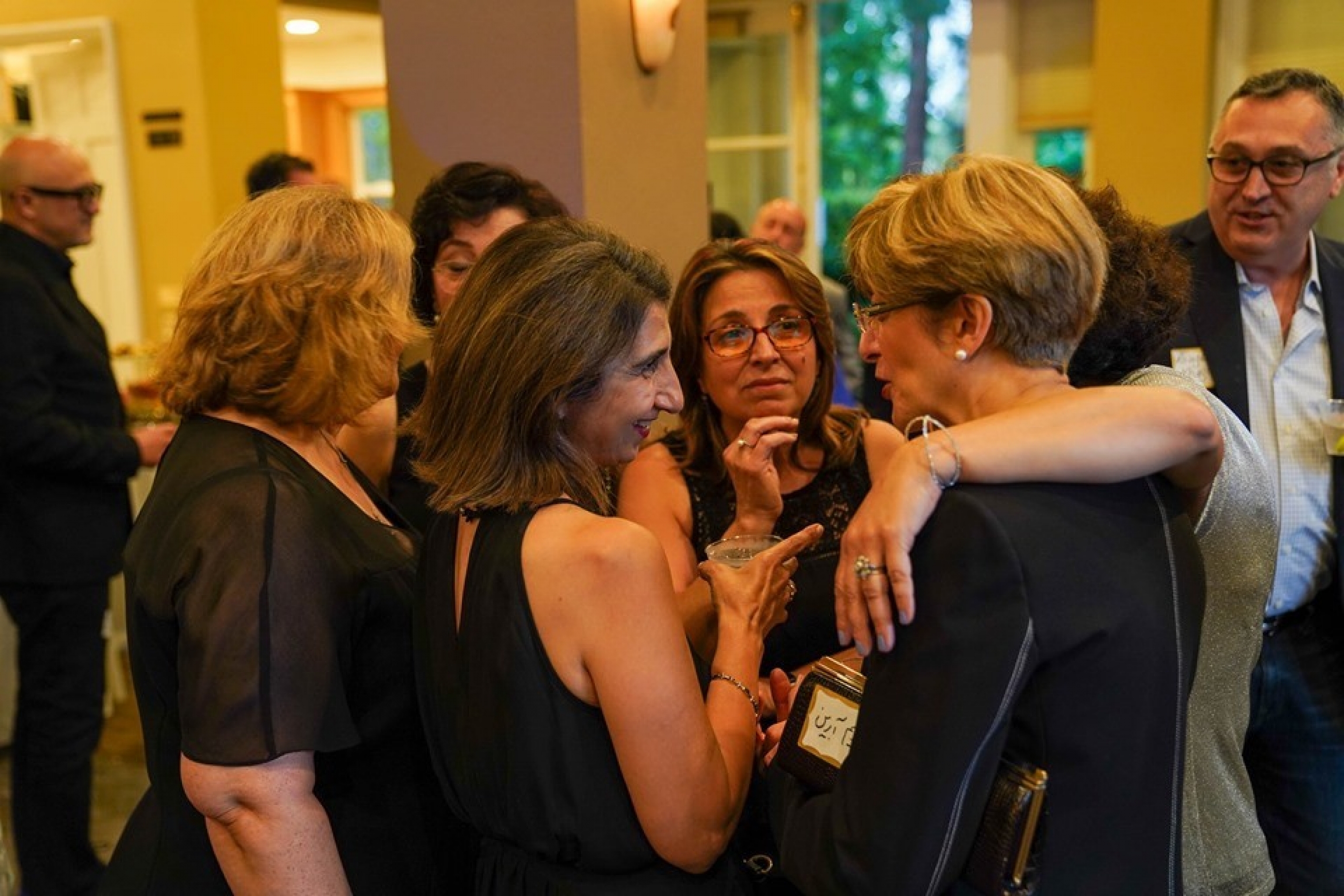 Mariam Arian (far right) with her childhood friends at Ettefagh School class of '77 reunion on Sept. 1, 2019.

“Men and women were raised side by side with the same level of expectation. Just because we were women, we weren’t granted this pass like, ‘Oh you’re [just] going to get married.’ We were very competitive, and very studious.”

“Men and women were raised side by side with the same level of expectation,” Arian said. “Just because we were women, we weren’t granted this pass like, ‘Oh you’re [just] going to get married.’ We were very competitive, and very studious.”

'It was really hard to leave'

Later in the evening, both students and former teachers — some now in their 90s — took the stage to share memories from their past. One alum recalled the pranks he and his friends pulled on the art teacher in attendance. In a private moment, another alum  caught a glimpse of his very first crush, whom he hadn’t seen in 42 years.

“Oh, she’s right there. With the white dress,” he said. “She’s beautiful. She hasn’t changed.”

Before I could get his name, he ran off to profess his love.

“Iran was just a good place at the time,” remembered comedian and filmmaker Fariborz Davoodian. “It was really hard to leave all of that behind.”

Davoodian transferred to a high school in the United States before the revolution to avoid the mandatory draft.

“Sometimes I tell myself, ‘I’ve been here 40-plus years. Why do I care so much?’" he said. "I care because I was born there, and Farsi is my first language, and my ancestors were all Persian. And I remember Iran the way it was and I see the Iran of today, and it’s a tragedy to me.”

A few people from the class of '77 chose to stay in Iran, like one woman who works as a doctor there. She didn’t want to use her name because of safety concerns about talking to Western media. She said it was important for her to attend the reunion despite the Trump administration's travel restrictions, and that she was able to come using a US visa after stopping in Canada.

“I think that these people are the most important ones in my life. It was a time that we were so pure, so kind. It was just friendship, nothing else. [We were] like sisters and brothers, and it was amazing. Now it is more amazing to see each other.”

“I think that these people are the most important ones in my life,” she said with a laugh. “It was a time that we were so pure, so kind. It was just friendship, nothing else. [We were] like sisters and brothers, and it was amazing. Now it is more amazing to see each other.” 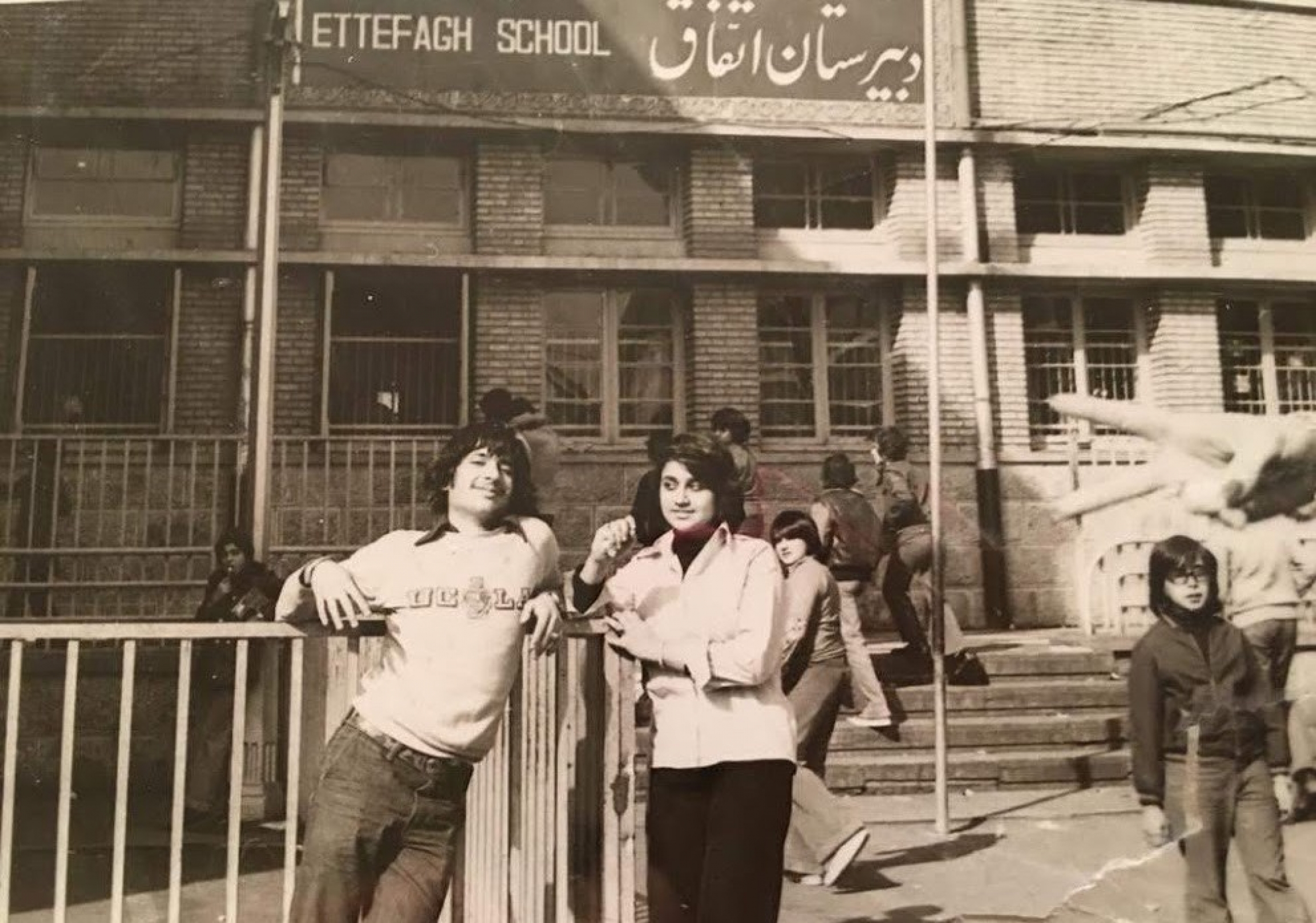 A photo featured in the alumni slideshow. The class of '77 was one of the last graduating classes to attend Ettefagh School before the Iranian Revolution. Later, Ettefagh became an all-girls school and is now run by the government.

'Today is just the celebration of that memory'

The doctor who stayed in Iran lost contact with many of her friends until recently, when she got back in touch with classmate Morris Shamouni. He had started a networking group on the messaging platform WhatsApp last Christmas Eve, and within days had tracked down the entire class of '77.

Like many of his Jewish classmates, Shamouni left Iran for fear of religious persecution.

Related: They wanted to save endangered cheetahs in Iran. Their work landed them in jail.

“When I left Iran in 1977, if you would have told me that in 42 years I would be living in the United States, having my own business, even have a family here, I would have laughed,” he said.

Today, Shamouni lives in Los Angeles, but he still carries the memory of the streets of Tehran where he used to play soccer, and the people from the corner store where he’d pick up groceries for his mom.

“We had a real connection to that community, which I carry that with me on a continuous basis. That's my Iran and that's my country. And those are my people.”

“We had a real connection to that community, which I carry that with me on a continuous basis,” Shamouni said. “That's my Iran and that's my country. And those are my people.”

Mandana Vassigh and Morris Shamouni were the main organizers of the Ettefagh School class of '77 reunion, held in Los Angeles on Sept. 1, 2019.

While the Iran of today is unrecognizable, so is Ettefagh. It’s still a Jewish school, but it’s an all-girls school and run by the government. Shamouni said that in a way, the  reunion was the closest thing to going back in time.

“We are still living with the memory of what we experienced then, and today actually is just the celebration of that memory.”

This article was originally published on KQED.org.