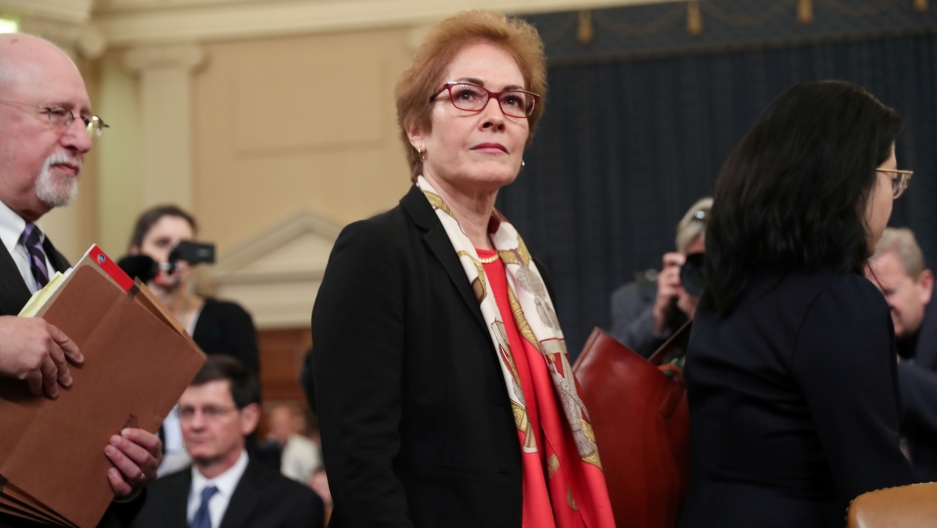 Marie Yovanovitch, former U.S. ambassador to Ukraine, departs after concluding her testimony before a House Intelligence Committee hearing as part of the impeachment inquiry into US President Donald Trump on Capitol Hill in Washington, on November 15, 2019.

In the second day of televised presidential impeachment hearings, Marie "Masha" Yovanovitch, a career diplomat, explained to members of the House Intelligence Committee how she had fought corruption in Ukraine and how the Trump administration abruptly removed from her post earlier this year.

Yovanovitch was ousted as ambassador to Kyiv in May after coming under attack by US President Donald Trump's personal lawyer, Rudy Giuliani, at a time when he was working to persuade Ukraine to carry out two investigations that would benefit the Republican president politically.

Giuliani also was trying to engineer a Ukrainian investigation into a debunked conspiracy theory embraced by some Trump allies that Ukraine, not Russia, interfered in the 2016 US election.

The main focus of the impeachment inquiry is a July 25 phone call in which Trump asked Ukrainian President Volodymyr Zelenskiy, who was elected in May, to open the investigations.

Democrats are looking into whether Trump abused his power by withholding $391 million in US security aid to Ukraine as leverage to pressure Kyiv to investigate former Vice President Joe Biden, who is a leading contender for the Democratic nomination to take on Trump in the 2020 election. The money, approved by the US Congress to help US ally Ukraine combat Russia-backed separatists, was later provided to Ukraine.

Molly Montgomery is a former adviser to Vice President Mike Pence on Europe and Eurasia. She spent 14 years in the Foreign Service before stepping down last year.

She spoke to The World’s host Marco Werman about what it’s been like for current and former US diplomats to watch this week’s hearings.

Marco Werman: Molly, you've been listening today to Marie Yovanovitch. Like a lot of people, what's jumped out at you?

Molly Montgomery: Absolutely. Well, first off, let me just say that Ambassador Yovanovitch is a profile in courage, as are George Kent and Bill Taylor, who testified yesterday. And I think what comes across so clearly in her testimony today is just what the United States is missing out on by sidelining its career officials.

What do you think the long-term consequences are for US diplomacy of her testimony?

Well, it certainly has made clear to the American people and to the world that our foreign policy and the State Department are in shambles. And I don't think you have to look any further than the way she has been treated and others in the State Department have been treated to understand why. I fully agree with her characterization that the department has been hollowed out. And unfortunately, diplomacy is a craft that takes years, if not decades, to learn. And so that expertise will not be able to be replaced quickly or easily. It's a real loss to us.

"Well, it certainly has made clear to the American people and to the world that our foreign policy and the State Department are in shambles."

Yovanovitch was talking about visceral stuff today — her fear after seeing the transcript of what Donald Trump said about her. What were you, as a career foreign service officer, what were you feeling listening to her testimony?

There are a lot of us who have served the country in various capacities, who I think were very emotional in hearing her speak about how it has felt to undergo the traumatic experience of being targeted by her own president and pulled from an assignment in which, by all accounts, she was succeeding. And so it is very troubling, particularly having seen the president's tweet while her testimony was ongoing, to see, from the Oval Office, the targeting of career officials and questioning of the quality of their work and their patriotism. It is very scary for people who, go to and from work every day, just like you and I do, don't have any special protection and find themselves very vulnerable, not just to trolls online, but to anyone who might choose to take those words as an inspiration to do harm.

Sahar was an Iran expert who had served, as almost all public servants do, for the previous administration. And her national origin is Iranian. And so there was a very troubling, I think, implication that her loyalty was suspect, both because of her work for the Obama administration as well as her background.

The report concluded that, in fact, she had been mistreated and that there were high-level officials, including the current envoy for Iran, Brian Hook, who is at the time the director of policy planning, who had — based not on merit, but on these other reasons — sidelined her from her duties and had her reassigned.

So this sounds familiar. Do you see parallels with what we're hearing happened to US career diplomats in Ukraine? Is that fair?

Absolutely. I would say that we've seen a number of cases, not just in Sahar's case or in Ukraine, of career officials who have been targeted based on either their work, or we have seen this idea of questioning the loyalty, particularly of public servants who are immigrants. Both Marie Yovanovitch and Lt. Col. Vindman, who testified or was deposed by the House impeachment inquiry, recently have seen their loyalty questioned because they immigrated to the United States, which is really disturbing, I think, to those of us who have served alongside people like Masha (Yovanovitch) and understand that their patriotism comes, if anything, from a deeper place because of having experienced other systems that don't have the freedoms and the values that the United States has.