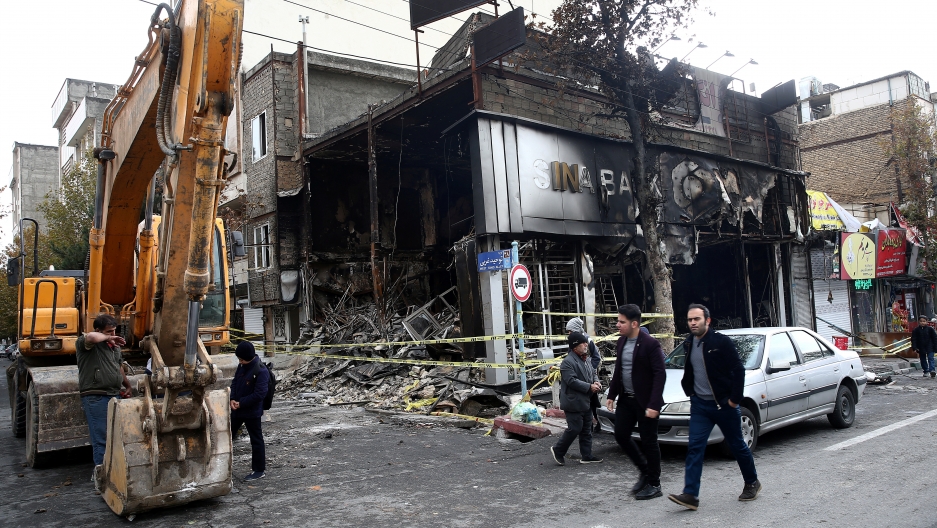 People walk near a burnt bank, after protests against increased fuel prices, in Tehran, Iran, Nov. 20, 2019.

Iranian authorities confirmed for the first time on Tuesday, Dec. 3, that security forces shot dead demonstrators during what rights groups have said was the deadliest anti-government unrest since the 1979 Islamic Revolution.

Related: 40 years on from the Iranian Revolution, could the country be at risk of another one?

The unrest, which began on Nov. 15, after the government abruptly raised fuel prices by as much as 300%, rapidly spread to over 100 cities and towns and turned political with young and working-class protesters demanding clerical leaders step down. Protests were snuffed out last week by a security crackdown.

Human rights groups have been closely monitoring the situation.

Omid Memarian is a deputy director at the Center for Human Rights in Iran. He spoke to Marco Werman about the aftermath of the deadly protests.

Marco Werman: As to the numbers of people killed in Iran — estimates range wildly from 150 to more than 450 — as well as thousands arrested. Those numbers were hard to confirm at first, but now the government there is acknowledging something savage happened. What's been the reaction to that admission?

Omid Memarian: It's very hard to deny the killings of people on the streets when these videos are surfacing on the internet and people are seeing what happened in many different cities. The government has refused to provide any accurate number regarding the number of people who have been killed or injured and those who have been arrested. But human rights organizations and citizens and activists inside the country are sending their reports out and basically give us the full picture of the violence in the aftermath of the protests in the country.

Why do you think these protests have become so much more violent than previous outbursts in recent years?

Any protests in Iran and any gatherings of people on the streets can turn into something much bigger because there are so many grievances and demands underneath that have not been heard over the past years. Politically, economically, and socially. So, I think that's why they decided to control that and they used the worst method — which is violence.

The last wave of widespread protests in the Islamic Republic came a decade ago after the very contested 2009 election. How is this wave of protests different from that year? What have you been seeing now?

In 2009, the protest had leadership. The two presidential candidates basically came out and they issued a statement and there was organization to it. It just started with a major demand, and that was "where is my vote?" It turned to other issues, too. But in the beginning, it was very much organized and we saw that they started from Tehran and a few other cities and then it expanded to other cities. This time around, it's different because the protests popped up in more than 100 cities. It was not organized. It was very organic. People thought that the increase in the price of gas really hurt them and they just felt insulted. That prompted people to come to the streets. And that's why it was in many, many different cities from small cities to big cities, particularly areas that are lower income. They came to the streets because they are affected most by this policy.

This is a very good question. These are the people [who] are the base, the major constituent of the Islamic Republic. They always pretend that they are supporters of the poor and their lower-middle-class and that that's why they are in power, to support them. Now, we see that their constituents have turned against them because they see that year after year after year, their policies have weakened their economic power. The fact that every year, they become poorer and poorer. They don't foresee a better future. I think when you lose hope for the future, your frustration might lead you to go to the streets and voice your demands.

Some people would say that these protests in Iran are exactly what the Trump White House wanted with its maximum pressure campaign on the country. Trump was actually asked today in London whether the US supported the protesters in Iran. He said at first he did not want to comment, but then he said no, the answer is no. Do you think these protests are the result of Trump's posture toward Iran?

Well, for sure. Iran has had a hard time. Sanctions are hurting the economy and the people very bad [off]. But on the other side, Iran's problems when it comes to the economy are much bigger than the sanctions. Iran has been struggling with corruption for many years. It's been struggling with bad governance, bad management, and economic inequality. That comes from government policies.

I know you have family in Iran. How are they doing?

My family, like many others in the country, feel the pressure. They are very uncertain about the future, particularly after this round of violence. There is a huge distrust between the government and people. When there is no trust, it's just so hard to execute any policy. I think that's the overwhelming feeling I witnessed, not only from my family but also from other people [who] I've talked to over the past few weeks.