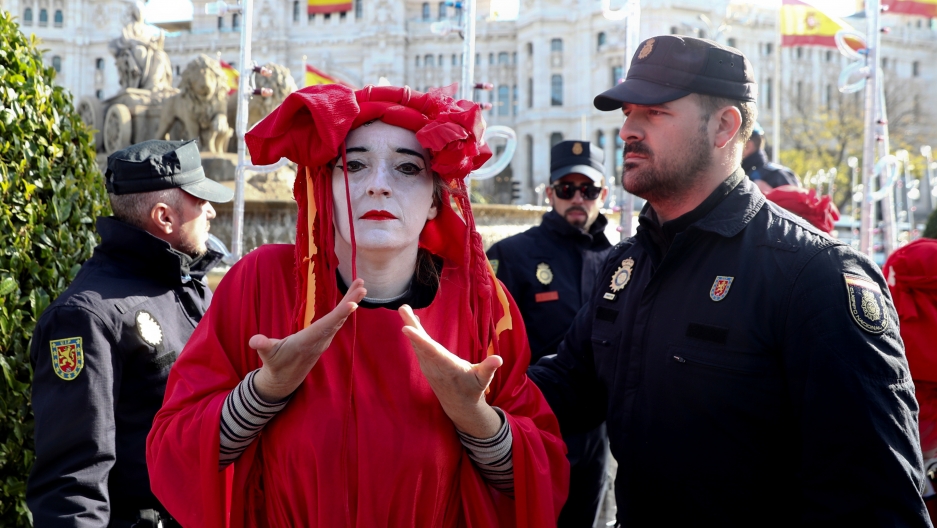 Members of Extinction Rebellion group are escorted by police officers after staging a protest at Cibeles Fountain during the UN climate change conference (COP25) in Madrid, Spain, on Dec. 3, 2019.

Delegates from around the world are gathering in Madrid this week for the COP25 international climate negotiations at a crucial moment in the effort to combat climate change.

A series of dire new reports warn that nations are failing to curb greenhouse gas emissions and the world is running out of time to contain warming to a safe level.

“The point of no return is no longer over the horizon. It is in sight and hurtling towards us."

“The point of no return is no longer over the horizon. It is in sight and hurtling towards us,” United Nations Secretary-General António Guterres said in a press conference ahead of the talks.

I expect a clear demonstration of increased #ClimateAction ambition & commitment out of #COP25. Leaders of all countries need to show accountability & responsibility. Anything less wold be a betrayal of our entire human family and all generations to come. pic.twitter.com/jnKjMRYRmI

Under the Paris climate agreement, every nation in the world has committed to keeping warming below 2 degrees Celsius above pre-industrial levels — and scientists say a better target is 1.5 degrees.

But so far, countries are failing to meet those targets. On Wednesday, researchers announced that global carbon emissions will likely hit a new record this year. That came after news that the past decade is “almost certain” to go down as the hottest on record. Meanwhile, the UN has released a “bleak” report warning that, without major emissions cuts, the Paris targets could soon be out of reach.

“Let’s be clear: Until now, our efforts to reach these targets have been utterly inadequate,” Guterres said.

Related: In Germany, the politics of climate change are shifting

Negotiators will try to change that trajectory during the talks, which are scheduled to run from Monday, Dec. 2, through Friday, Dec. 13, 2019.

Here are four things to watch for:

2020 will be a critical year for the international effort to combat climate change. Many countries are due to submit new plans for reducing their greenhouse gas emissions under the Paris agreement —  and the question is whether enough countries will put forward ambitious enough plans to keep warming at acceptable levels.

Advocates say the next year is key —  similar to the lead up to the Paris agreement itself.

“The next 12 months are going to be absolutely the most important twelve months since the equivalent period five years ago."

“The next 12 months are going to be absolutely the most important twelve months since the equivalent period five years ago,” said Andrew Steer, head of the World Resources Institute, a DC-based think tank.

The UN estimates that nations must cut global carbon emissions by 7.6% a year for the next decade in order to keep warming below 1.5 degrees. That will be a major challenge, given that global emissions are still rising.

So far, about 70 countries have said they will somehow increase their commitments. But the world’s biggest carbon emitters —  including China and the US — have not.

The key question, Steer said, is whether countries can start to build momentum that will lead to major announcements in 2020: “Will people leave Madrid in a spirit [of], ‘Actually, we could make this work next year’?”

Another question is who will lead the charge.

In 2014, the US and China, the world’s two largest emitters, struck a deal to reduce their greenhouse gas emissions. That deal paved the way for the Paris agreement the following year. But the US won’t play that role again: In November, the Trump administration formally began the process of exiting the climate agreement (though under the rules of the Paris agreement, the US can’t actually leave until Nov. 4, 2020, the day after the presidential election.)

So who will step in? Advocates are looking to other countries to provide leadership — especially the European Union and China.

“The real question is, could you see China and the European Union get together the way the US and China did just before Paris."

“The real question is, could you see China and the European Union get together the way the US and China did just before Paris,” said Alden Meyer of the Union of Concerned Scientists.

Such an agreement could come during an EU-China summit scheduled for September 2020.

So far, China has not yet announced its plans for 2020. But the new head of the European Commission, Ursula von der Leyen, has made climate change a key priority. She is expected to unveil her proposal for a “European Green Deal” to tackle climate change next week, and EU leaders could decide this month whether to endorse a goal of net-zero carbon emissions by 2050.

Last year, in Katowice, Poland, negotiators hammered out a “rulebook” governing how the Paris agreement should be implemented. But there was one major issue on which they could not agree: the so-called “Article 6” rules, or how to regulate international carbon markets.

That may sound technical, but experts say the stakes couldn’t be higher.

Related: The world struck a major climate deal in Poland. What's in it?

“How these rules are decided is really going to make or break the ambition of the Paris agreement,” said Kelly Levin, also with the World Resources Institute.

Poorly designed carbon markets could actually lead to an increase in emissions, by allowing countries to count reductions that exist only on paper, said Mandy Rhambaros, a negotiator for South Africa. She said negotiators must come up with clear, transparent rules to ensure that emissions are accounted for accurately.

On Tuesday, Swedish climate activist Greta Thunberg arrived in Portugal after sailing across the Atlantic to deliver her message demanding more action on climate change.

She’s not the only one on her way to Madrid. This year’s COP is the first to take place after the explosion of climate protests led by young people around the world. Europe has seen some of the largest protests —  and now that the conference has moved to Madrid from Santiago, Chile, it’s within reach for the continent’s climate activists.

Groups like Fridays for Future and Extinction Rebellion have encouraged members to attend. On Friday, just before the conference opened, hundreds of thousands of people marched to demand climate action in cities around the globe, including in Madrid.

One question is whether their presence will have any influence on the talks. Activists certainly intend to make themselves heard.

“None of the climate conferences of the last decades has stopped the worldwide CO2 increase. ... We won't stand idly by and watch this happen again!”

“None of the climate conferences of the last decades has stopped the worldwide CO2 increase,” tweeted the German group Fridays for Future. “We won't stand idly by and watch this happen again!”

Thunberg agrees. As she told reporters in Lisbon, "People are underestimating the force of angry kids."