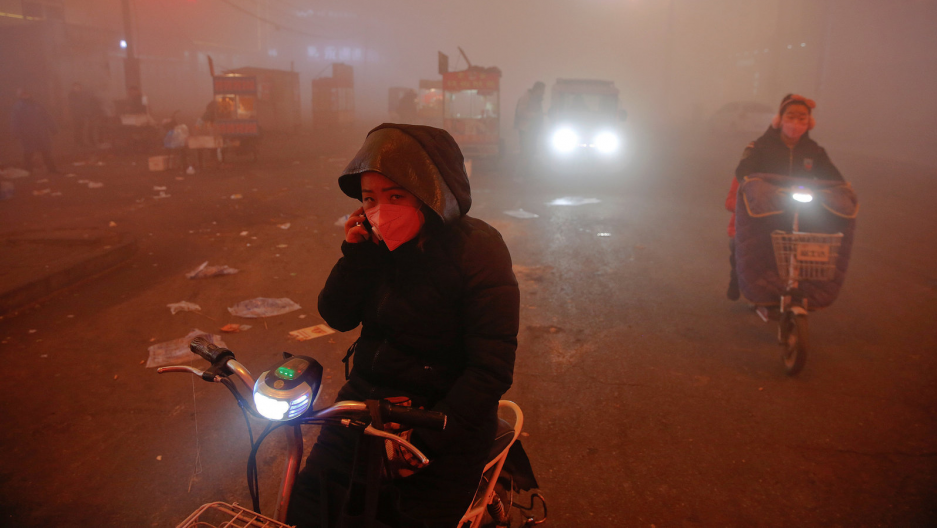 Keeping the Earth's temperature rise to 1.5 degrees Celsius means making rapid, unprecedented changes in the way people use energy to eat, travel and live or we risk even more extreme weather and loss of species, a UN report said on Monday.

Meeting 1.5C (2.7 degrees Fahrenheit) above pre-industrial levels, rather than the 2C target agreed at global climate talks in Paris in 2015, would have "clear benefits to people and natural ecosystems," the United Nations Intergovernmental Panel on Climate Change (IPCC) said on Monday.

Without real change, the world is not even on course to reach the 2C target, experts said.

UN World Meteorological Organization (WMO) Secretary-general Petteri Taalas told reporters in Geneva: "There is clearly need for a much higher ambition level to reach even a 2-degrees target, we are moving more toward 3 to 5 [degrees] at the moment."

The past 18 years have been the warmest on record since the 1850s when measurements began, he said. Scientists attribute the temperature rises and extreme weather mainly to greenhouse gases including carbon dioxide from fossil fuels such as coal, oil and gas.

The IPCC report said at the current rate of warming, the world's temperatures would likely reach 1.5C between 2030 and 2052 after an increase of 1C above pre-industrial levels since the mid-1800s.

Meeting the 1.5C target would keep the global sea level rise 0.1 meter (3.9 inches) lower by 2100 than a 2C target, the report says. That could reduce flooding and give people on the world's coasts, islands and river deltas time to adapt.

The lower target would also reduce species loss and extinction and the impact on ecosystems, the report said.

"Even the scientists were surprised to see ... how much they could really differentiate and how great are the benefits of limiting global warming at 1.5 compared to 2," Thelma Krug, IPCC vice-chair, told Reuters.

The IPCC met last week in Incheon, South Korea to finalize the report, prepared at the request of governments in 2015 to assess the feasibility and importance of limiting warming to 1.5C.

The report is the main scientific guide for governments on how to implement the 2015 Paris Agreement, agreed by nearly 200 nations, and will be debated at the Katowice Climate Change Conference in Poland in December.

Related: If the Greenland ice sheet melts, what happens to New York City? This reporter went to find out.

US President Donald Trump withdrew the United States from the accord last year, invoking concerns for the US economy, and has espoused pro-fossil fuel policies. But US states, led by California and many cities, are living up to their commitments to cut greenhouse gas emissions, WMO's Taalas said.

"The USA is on the right track to reduce its emissions, you have already been reaching 50 percent of the pledges the Obama administration was having on the table as part of the Paris Agreement," he said, and cited companies such as electric vehicle maker Tesla as helping to bring about change.

To contain warming at 1.5C, manmade global net carbon dioxide (CO2) emissions would need to fall by about 45 percent by 2030 from 2010 levels and reach "net zero" by mid-century. Any additional emissions would require removing CO2 from the air.

The report said renewable energy would need to supply 70-85 percent of electricity by 2050 to stay within a 1.5C limit, compared with about 25 percent now.

Using carbon capture and storage (CCS) technology, the share of gas-fired power would need to be cut to 8 percent and coal to under 2 percent. There was no mention of oil in this context in the summary.

If the average global temperature temporarily exceeded 1.5C, additional carbon removal techniques would be required to return warming to below 1.5C by 2100.

But the report said the efficacy of measures, such as planting forests, bioenergy use or capturing and storing CO2, were unproven at a large scale and carried some risks.

The report also urges individuals to act, such as by reducing consumption of meat and dairy products, driving electric vehicles or taking public transport and demanding and buying low-carbon products.

The effects of not meeting the 1.5C target would mean huge changes to the world. The lower level would mean the Arctic Ocean would be free of sea ice in summer only once per century not at least once a decade under the higher target. Coral reefs would decline by a still unsustainable 70 percent to 90 percent instead of being virtually wiped out under the higher target.

"The report shows we only have the slimmest of opportunities remaining to avoid unthinkable damage to the climate system that supports life as we know it," said Amjad Abdulla, IPCC board member and chief negotiator for an alliance of small island states at risk of flooding as sea levels rise.

The report came as Americans William Nordhaus and Paul Romer, pioneers in adapting the western economic growth model to focus on environmental issues, won the 2018 Nobel Economics Prize on Monday.