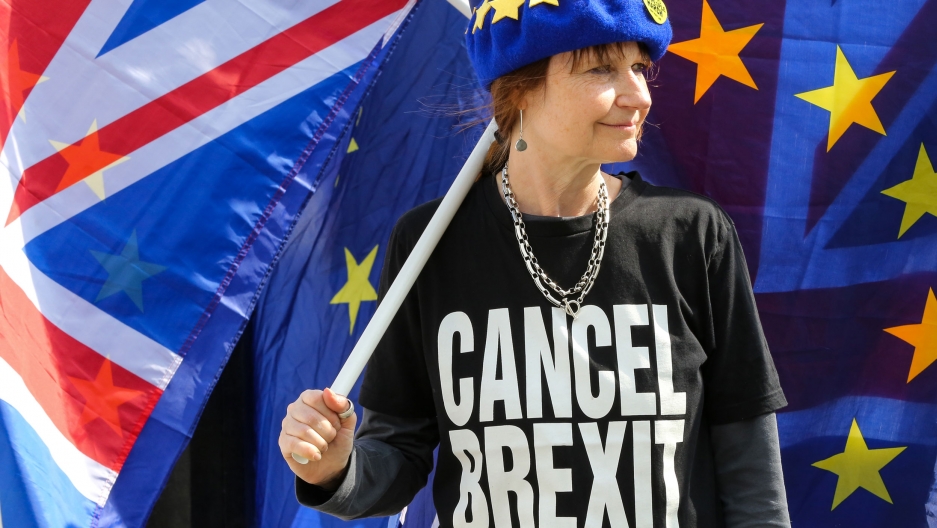 An anti-Brexit demonstrator is seen wearing an EU flag cap and a T-shirt with "Cancel Brexit" protesting outside the Houses of Parliament.

In Britain, the fashion industry is worried.

The UK economy benefits significantly from the industry — to the tune of around $40 billion per year. But with one week to go before the UK is slated to officially leave the EU, Brexit woes are still trending among designers.

According to the British Fashion Council, 90% of fashion designers there say they would prefer to stay in the European Union. They are making their mark in anti-Brexit marches where many campaigners sport T-shirts reading “Cancel Brexit” and “Fashion Hates Brexit.” 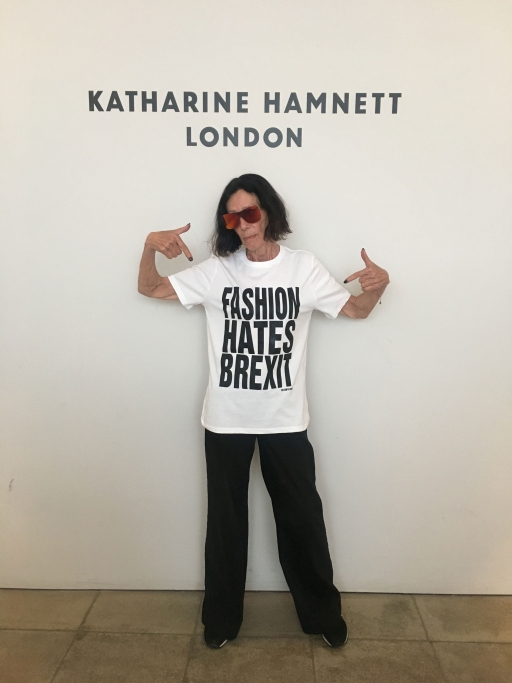 Katharine Hamnett, one of the pioneers of modern British fashion, is known for her political statement pieces.

Those T-shirts were designed by Katharine Hamnett, one of the pioneers of modern British fashion. Unlike many in the fashion business, Hamnett is vocal about her views on Brexit.

“I really hate this whole thing,” Hamnett said. “Just show me one good reason for Brexit … if you can find it anywhere, because I can't. It's just heartbreaking.”

But Hamnett isn't mixing fashion with politics for the first time. She first made front-page headlines in 1984, when attending a party at Margaret Thatcher’s house.

As Hamnett turned to greet the British then-prime minister, she opened her coat to reveal  a T-shirt reading “58% Don't Want Pershing.”

Related: How much will a 25% tariff hurt sales of Scotch?

The shirt was a reference to the controversial Pershing II guided ballistic missile that the US had deployed in Europe and aimed toward the Soviet Union, sparking huge, anti-nuclear demonstrations.

The protest in shirt form cemented Hamnett’s place as an activist and iconic designer. But despite all the publicity, Hamnett is not convinced her T-shirts are having much effect.

“We’ve got marches, we’ve got petitions, we’ve got T-shirts, but they failed,” she said. “The only thing that actually changes politicians' behavior is something that threatens their ability to get reelected. That’s what we‘re trying to galvanize people to do. To actually write to their [Member of Parliament] and say, 'Unless you represent my views, I won't be voting for you in the next election.'”

For an industry worth around $40 billion to the UK economy, it does appear to be low on politicians’ priority lists. The fishing industry, which, conversely, has featured in many parliamentary debates, is worth around $1.7 billion. Fashion employs almost as many people as the financial sector in Britain, but garners nowhere near the same attention in terms of the Brexit debate.

Tamara Cincik, who founded Fashion Roundtable, is hoping to change that. Cincik launched the group, which draws on expertise across fields, as a way to lobby politicians about the needs of the fashion industry after the Brexit referendum.

While many businesspeople now say they just want a definitive decision by government on the UK’s future, Cincik says the fashion industry wants more. “We’re not hearing, 'We want this deal done and dusted,'” she said. “We’re hearing, 'We want our voices heard.'”

And for most people in fashion, that means remaining in Europe, she said.

“This is so bad for the UK economy, that we cannot countenance just sitting by.”

“The people we speak to want a second referendum, and I asked them the question, 'Has your vote changed?' and none of their votes has changed,” Cincik said. “This is so bad for the UK economy, that we cannot countenance just sitting by.”

But it's not just about the designers. Many European students travel to the UK to study fashion, too.

Paul Yuille is the director of international at London College of Fashion, where he works on student recruitment and international partnerships. He says many of their students are likely to be affected by Brexit.

“We’ve kept up a specific Brexit conversation with our students, making sure they have [the] right to remain or they have settled status,” Yuille said, adding that over half of the students could be affected going forward.

But unlike many in the industry, Yuille is upbeat.

“We saw a steady increase in our applications and the quality of students that we are seeing applying to the University of the Arts [London], specifically, London College of Fashion,” he said. “The weakening of the pound has actually made it more attractive for [the] UK to be a place or destination for them to study.”

But will students stay after graduation if Brexit happens?

Designer Hamnett is not convinced.

“People who are living here feel like they have been dumped by a lover.”

“People who are living here feel like they have been dumped by a lover,” she said. “They thought this was their home.

Hamnett's own assistant is going back to Italy because of Brexit.

Related: Boris Johnson’s Brexit deal: What’s in it and how is it different to Theresa May’s version?

“There’s a racism towards Europeans,” Hamnett added. “And also, they feel that the financial, economic prospects of the British fashion industry where they’re working are going to shrink radically under Brexit so they’d better move now — sooner rather than later.”

But just how prepared is the industry for Brexit?

Cincik says many designers have already moved offices to other parts of Europe.

“I’ve met with some that have entirely relocated their business,” she said. “I’ve met some who have moved part of their business. At the moment, because this is an exciting creative hub, they might keep their tech team here, but they’re basically moving their logistics … and more importantly, their taxation out of the UK.”

The British Fashion Council says a "no-deal" Brexit scenario could cost the fashion industry more than $1 billion in one year.

Hamnett, for her part, has opened a company in Italy, which has helped her become a little more Brexit-proof.

As for the iconic t-shirt and her famous meeting with Thatcher?

“I had no idea it would have such extraordinary longevity. I just thought it was a here today, gone today, quite funny gotcha,” she said. “It's been a kind of millstone around my neck ever since.”