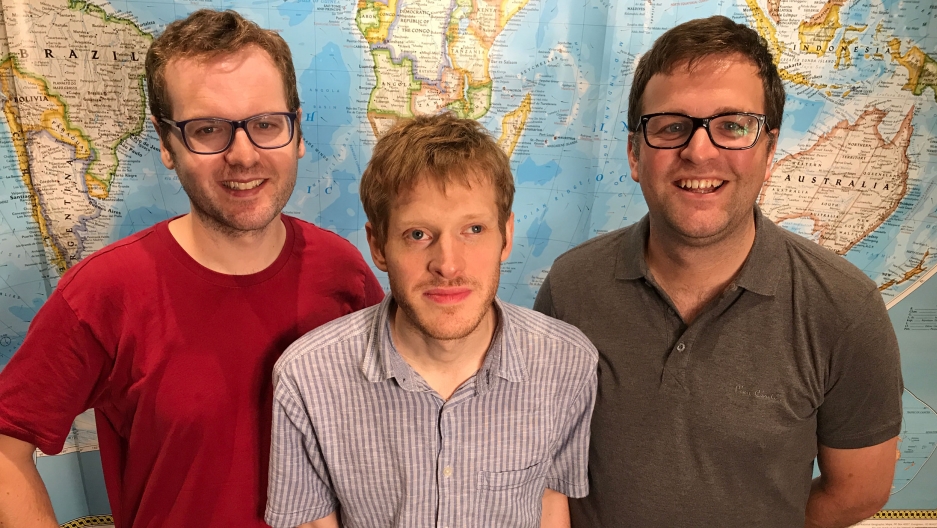 Sean Cooney, left, David Eagle, center, and Michael Hughes, right, pose for a photo in the The World's Boston studio.

Brexit remains up in the air more than three years after Britons voted to leave the EU in a 2016 referendum. Options range from a turbulent "no-deal" exit to abandoning the whole endeavor.

It's against the backdrop of Brexit that the folk music trio, The Young'uns, is asking what it means to be a patriot in Britain.

"What is fascinating for me, being a history student and looking into these things a lot recently, is how patriotism has been almost completely lost on the left-wing of politics," said band member Sean Cooney.

The trio, which was named Best Group by BBC Radio 2 Folk Awards in 2015 and 2016, and has produced four studio albums, stopped by The World's studio in Boston, Massachusetts, to talk about Brexit and patriotism and play their music.

They sing about patriotism in one of their songs, "Ghafoor's Bus."

A line in the song nods to the 1940 evacuation at Dunkirk, when fishing boats, ferries and pleasure cruisers assisted the military in safely rescuing 330,000 troops. The "Dunkirk Spirit" often refers to British solidarity.

"Dunkirk, in many ways, is a patriotic British people really adhere to," explained Cooney, who wrote "Ghafoor's Bus."

Now in Dunkirk we remember yet the soldiers on the sand

But here comes one more vessel now, across the angry sea,

In "Ghafoor's Bus," The Young'uns tells the story of Ghafoor Hussain, an immigrant to the UK who has traveled thousands of miles feeding stranded migrants in Europe.

The song has "Dunkirk in the context of someone who was born in Pakistan, who came to Britain, who did amazing things and helped people who became part of the Dunkirk Spirit," Cooney said.

A song on their 2017 record, "Strangers," also plays with the idea of what it means to be patriotic in Britain.

"A Place Called England" was written in 1999 by British singer and songwriter Maggie Holland, but Cooney says the song is just a relevant in 2019.

"Many of the issues come even more to the fore now in the last couple of years in the UK," Cooney said. "It's not a song about flags or money. It's a song about England as a piece of earth, really. I think the style that we sing it in is bold and in your face. But I think we always like to ask questions with the songs rather than sort of stump in any politics or belief. But sometimes it's hard not to just have a little dig in there."

And come all you at home with freedom, whatever the land that gave you birth

There’s room for you, both root and branches, long as you love English earth

Room for ball and room for orchid, room for all to grow and thrive

Just less room for the rich landowner, he can stay in the Virgin Isle

For England is not flag nor empire, it’s not money, it’s not blood

Blackbirds singing from the May-tree, lark ascending through the scales

Robin watching from your spade and English earth beneath your nails

The reference to the rich landowner is not about the Virgin Islands, Cooney says — it's to offshore tax funds, like the Panama Papers.

"People say, 'Well this is my country and I want it back.' And that's often very a white-centric, patriotic kind of mindset," said David Eagle. "And it's our idea that we live in this country, as well, and these are our core values and this is if we're going to say we're patriotic, this is why — because of our rich social history of inclusion, rather than this kind of building an empire and saying, 'This is mine and you're not welcome and get out.' And so we're almost ... reappropriating this idea of, this is our country, make Britain great and that kind of thing."

The Young'uns released a piece of modern folk theater earlier this year called "The Ballad of Johnny Longstaff," which tells the story of a man who goes from begging on the streets in England to fighting fascism in the Spanish civil war. The group just completed its first US tour and has four upcoming shows in Europe.