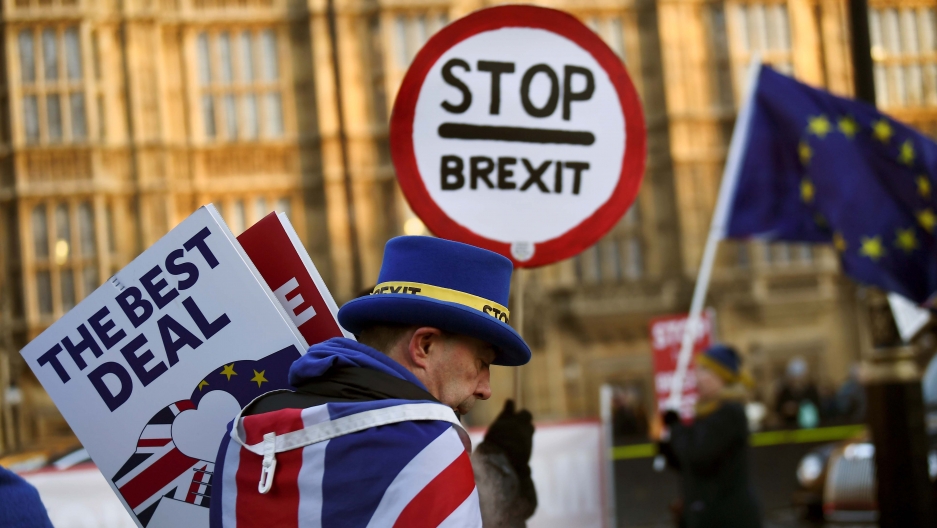 An anti-Brexit protester walks outside the Houses of Parliament in London, Jan. 17, 2019. The consequences of Brexit could reach across the pond, having an affect on average Americans, as well as Britons.

UK Prime Minister Theresa May's proposed Brexit deal suffered a sound defeat in the House of Commons on Jan. 15, leaving an air of mystery surrounding the future of Great Britain's exit from the European Union. It's clear that Brexit will have far-reaching consequences for Britain, but what about America? Will it have ripple effects across the pond?

Understanding Brexit is a head-scratcher for many — Roman Mars, the creator/host of the 99% Invisible radio show, even started a Twitter thread looking for answers.

I would tear through a narrative Brexit explainer podcast series made for people outside the U.K. The current fight is in a stage where I no longer follow the nuances with any great certainty

Well, we're taking a stab at it — here are a handful of reasons that Americans ought to care about Brexit:

One benefit of free trade is that it slashes the cost of supply chains. Fair trade agreements, like the EU’s Agreement on the European Economic Area, make buying products around the world cheaper and easier. With Brexit, Britain will leave the EEA, which has significantly reduced tariffs in Europe. Supply chains for everything from food to energy will be broken. As the cost of producing British and EU goods goes up, so does the price tag for the end products. That means you could soon be paying top dollar for your imported English breakfast tea and Cadbury Creme Eggs (Cadbury is even starting to stockpile chocolate).

The UK has long enjoyed a “special relationship” with the US. American and British interests have historically been closely aligned — often even their politics follow the same trends. Britain has given the US a certain amount of “voice” in the EU and a back door into European politics. With Brexit, those dynamics are certainly going to change. Europe is losing the largest, English-speaking EU member and also the biggest advocate for trade and alliances with non-EU nations. Some smaller EU countries are also losing a powerful ally in the UK, and a consistent vote in the European Parliament for deregulation and freer trade. This will no doubt strain US-EU relations.

Sanctions are one of the most powerful tools that the US, UK and EU use in international politics. Together, EU-US sanctions to hold individuals and countries accountable are more effective and better enforced. Brexit endangers this alignment and future sanctions' reliability. Also, Brexit threatens Britain’s membership in Europol, the European Union Agency for Law Enforcement Cooperation. This limits the US and the UK’s ability to respond to potential threats in Europe because it impedes access to the “five eyes” — the intelligence alliance between the UK, US, Canada, Australia and New Zealand. Brexit could also have a detrimental effect on NATO, presenting another risk for the alliance at a time when US commitment is already on shaky ground.

Freedom of travel is also under threat. In recent history, Americans have enjoyed visa-free access to the UK and the EU. As global relationships deteriorate, the need for costly visas will likely grow. In the event of a no-deal Brexit, Brits will probably need a visa to cross the English Channel into the EU. British airlines will need to renegotiate access to European airports and membership in the EU-US Open Skies Agreement. This could also increase costs for US travelers. So, start saving if you’re planning a trip across the pond. Brexit will likely result in more expensive air travel between the US and the UK, as well as between the UK and EU.

Ongoing interests in its former colonies mean Britain has frequently advocated on behalf of its Commonwealth partners. Britain has been a vocal advocate and significant funder of the EU's European Development Fund, which grants aid and development cooperation for countries outside the EU. Without Britain advocating for Commonwealth countries, Africa loses a vital voice in the EU. Europe could potentially reduce aid to African Commonwealth countries and put future trade agreements on the back burner. Meanwhile, Africa has historically been the hardest hit by climate change. Losing the UK as an advocate for Africa issues in Europe could contribute to an overall increase in environmental refugees. This could affect USAID and other US efforts in Africa and Asia, and will likely lead to larger migration pressures in the US and around the world.

Taylor Rockhill is a graduate student at the University of Washington, specializing in development economics in Sub-Saharan Africa and South Asia. He also specializes on the Commonwealth and has been a policy analyst for Commonwealth organizations.