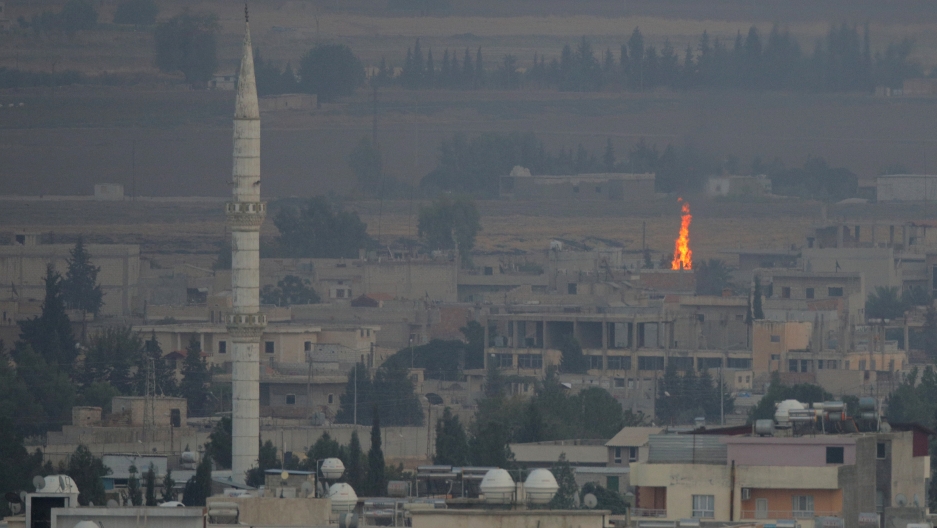 A fire in the Syrian town of Ras al-Ain as seen from the Turkish border town of Ceylanpinar, Sanliurfa province, Turkey, Oct. 17, 2019.

As the Turkish military continues its incursion into northeast Syria, there are reports of ISIS detainees leaving prisons and detention camps.

Five ISIS detainees escaped from Navkur prison last Friday after Turkish mortars landed nearby, according to the Syrian Democratic Forces, which is responsible for all of the ISIS prisons in northern Syria.

CCTV footage from the prison shows a courtyard that appears calm — at first. Then, a rocket hits, kicking up dust. Mayhem ensues. Men stream outside, running. They seem confused. Soon, they are out of the view of the camera, presumably gone for good.

The escape from Navkur is just one of several reported prison breaks in northern Syria in the last week. At a camp called Ayn Issa, more than 800 detainees escaped this past Sunday, according to Kurdish forces.

Guy Van Vlierden, a reporter for Belgian newspaper Het Laatste Nieuws, said three Belgian women were among those who escaped.

“They were held at the Islamic State section of the camp, and they are all gone now.”

“They were held at the Islamic State section of the camp, and they are all gone now,” said Van Vlierden, who has been studying the stories of European ISIS sympathizers closely.

According to Van Vlierden, two of the women were well known in Belgium because their stories were extensively covered in the media. Van Vlierden adds that between the two of them, the women have six children, and now their whereabouts are unclear.

There are reports of other Europeans missing, as well.

According to news reports, Lisa Smith, who is Irish, and her 2-year-old daughter were also among the ISIS detainees at camp Ayn Issa. Smith worked for the Irish Defence Forces until 2011. Then, she reportedly converted to Islam and joined ISIS. Kurdish forces captured Smith in Syria in March, and she had been in detention ever since.

On Monday, her father pleaded with the Irish government to help find his daughter and granddaughter, and bring them back to Ireland. In July, Smith told the BBC she is innocent.

“I don’t even think I’m radicalized,” she said. “All I know is that I came to an Islamic State and it failed. [...] I’m just interested in bringing my daughter up.”

Van Vlierden said before the Turkish military campaign, there were at least a thousand European detainees in camps and prisons across northern Syria.

Last week, US President Donald Trump was asked about ISIS detainees in northern Syria at a press conference.

“Well, they’re going to be escaping to Europe,” Trump said. “That’s where they want to go. They want to go back to their homes, but Europe didn’t want them for months. We could have given it to them.”

European countries have, in fact, been reluctant to take back ISIS detainees. As the Turkish forces began their assault on Syria, the US military moved to send some of the “high value” detainees to Iraq. On Monday, Trump repeated that ISIS is no longer America’s problem.

....and Assad to protect the land of our enemy? Anyone who wants to assist Syria in protecting the Kurds is good with me, whether it is Russia, China, or Napoleon Bonaparte. I hope they all do great, we are 7,000 miles away!

Firas Modad thinks Trump has a point. He is an analyst at IHS Markit, a London data and consulting company, and specializes in the Middle East and North Africa.

“They certainly can’t enter through any legal pathways, and what we’ve seen is that these individuals tend to prioritize attacks in territory that they are familiar with."

“They certainly can’t enter through any legal pathways, and what we’ve seen is that these individuals tend to prioritize attacks in territory that they are familiar with,” Modad said.

The question now, Modad says, is what is next for the newly freed ISIS supporters — will they focus on rebuilding ISIS, also known as the caliphate, or will they plan attacks in Europe?

“My guess is that their priority will be to bring back the caliphate,” Modad said. “Given that they had been in prisons and processed, once they enter Europe, they would be rather quickly detected. So, perhaps some of that risk is exaggerated.”

But Modad adds that the prison breaks provide the group with fresh recruits.

They also give it a much-needed morale boost, said Michael Pregent with the Hudson Institute in Washington, DC.

“They would feel victorious I would imagine,” said Pregent. “It was a pretty dim situation to be captive as an ISIS fighter, captive by the Kurds and then all of a sudden, being released. That's a very motivating feeling to have.”

Pregent, a former US intelligence officer, thinks Trump’s decision to pull the US military out of northern Syria was a gift to ISIS.

Trump claims that ISIS has been defeated. But evidence on the ground suggests otherwise. ISIS has managed to carry out attacks not just in Syria and Iraq, but also in Afghanistan. Pregent says the US departure from northeast Syria will have lasting consequences.

“A wavering United States has now left allies, allies that we’ve had for five years, vulnerable to ISIS. To reprisal attacks from the Assad regime. From the Russians. From Iranian militias. And now from Turkey. ISIS can capitalize on this. ISIS is alive and well,” Pregent said.