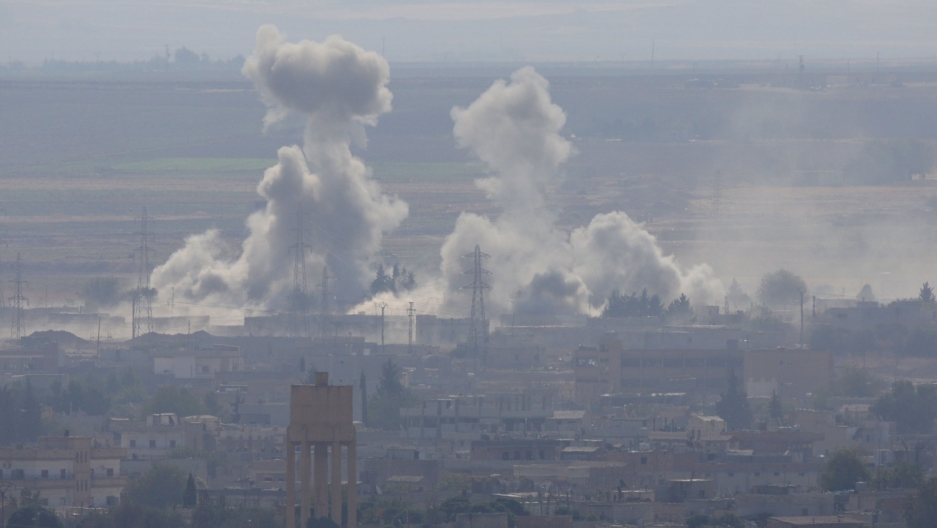 Smoke rises over the Syrian town of Ras al-Ain as seen from the Turkish border town of Ceylanpinar, Turkey, Oct. 15, 2019.

Turkey ignored US sanctions and pressed on with its offensive in northern Syria on Tuesday, while the Russia-backed Syrian army roared into Manbij, Syria, one of the most hotly contested cities abandoned by US forces following an abrupt policy shift by President Donald Trump.

Russian and Syrian flags were flying from a building on the city outskirts, and from a convoy of military vehicles. In Manbij, Syrian troops were manning joint checkpoints, Reuters reported.

A week after reversing US policy and moving troops out of the way to allow Turkey to attack Washington's Kurdish allies, Trump announced a package of sanctions to punish Ankara.

But the measures — mainly a hike in steel tariffs and a pause in trade talks — were less robust than financial markets had anticipated, and Trump's critics derided them as too feeble to have an impact.

Kurdish fighters have served alongside US military personnel for decades. The withdrawal of US troops from northern Syria is bringing back memories for American military veterans.

George Dumaine, who was deployed with the US military to the Turkish-Iraqi border for Operation Provide Comfort in the first Gulf War, helped set up a tent city to provide relief after Saddam Hussein's Iraqi forces attacked the Kurds.

The tent city offers aid like medical supplies, blankets and medication. Dumaine told The World about all the happy kids running around the tent city.

“The first time I went into the tent city when it started being populated with Kurds, [it] was the children I noticed,” Dumaine said. “They kept running and [shouting], ‘George Bush No. 1!’ It was really cool to see … the recent news, it brought it all up and all those memories came back and all those kids now are all grown men and probably [have] their own families and it’s just a really sad thing to think about.”

Years later, during the Iraq War in 2003, many veterans fought alongside the Kurdish peshmerga forces in the Kurdistan Region. Brandon Davis, who served with a civil affairs detachment in northern Iraq, described living and working among the Kurds in Duhok where a peshmerga commander offered his fighters' help in protecting the US military safe house complex.

“It was our experience that they had skin in the game,” Davis said. “They had a tradition of fighting [and] fought against Saddam’s forces for decades. I felt like we’re allies; now, I feel like we have basically used them.”

Jeremy, who didn't want to use his last name because he's still an active medevac pilot in the US Army, spent the better part of 2017 living in northern Syria in a town called Kabani. Jeremy told The World about the Kurds who cooked for his unit and how much he looked forward to Thursday nights which was “local night.”

“They would make their kebabs and baba ghanouj, they would make whatever the local fare was,” he said, “and we found a way to connect with each other even in areas where we only had so many translators, over meals and over fellowship at the end of a hard day.”

Jeremy said the policy shift and withdrawal of US troops from the region is more than a political issue — it’s a “relational issue” for him.

“It’s frustrating because at the same time, I have to trust the leadership in the military — we have a chain of command for a reason,” he added. “But on the other hand, I’m a human and I see the human cost. I don’t want lives to have been lost in vain … Every time I read the news, I get a little more angry.”

If you are a US veteran and want to help The World report on defense and military issues, send an email to veterans@theworld.org to join our network of veterans.