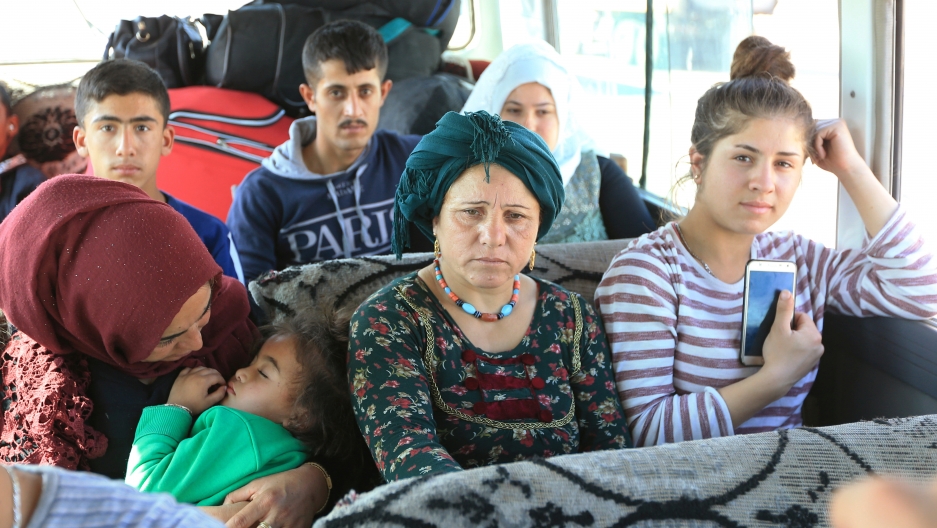 Syrian displaced families who fled violence after the Turkish offensive against Syria, sit in a bus on their way to camps on the outskirts of Dohuk, Iraq, on Oct. 16, 2019.

Violence is surging in northern Syria. The Turkish military offensive is entering its second week. And Syrian government forces are also streaming into the area.

On the ground, hundreds of thousands of civilians have been displaced and dozens killed. Some of the wounded have found their way to a hospital not far from the front lines in Tal Tamer, Syria.

That's where The World’s host Carol Hills reached Tania Brown, a UK citizen who's been volunteering in a hospital in Syria's Kurdish-controlled region.

“I'm not actually a medic. I'm a bike mechanic. It’s kind of all hands on deck because there's so many injured people coming in from Sere Kaniye and from other places that the Turkish army is just smashing.”

“I'm not actually a medic. I'm a bike mechanic,” Brown said. “It’s kind of all hands on deck because there's so many injured people coming in from Sere Kaniye and from other places that the Turkish army is just smashing.”

Are you treating civilians as well as fighters?

Have you had to treat any children?

Yes. There was one child yesterday with really terrible, terrible burns from the top half of his body down, all the way down to his waist.

From your perspective, are civilians bearing the brunt of these battles, or are the fighters?

Civilians. The day before yesterday — I'm a bit confused about days, because I don't sleep because we just are in the hospital 24/7 working, pretty much — civilians leaving their homes, their homes being destroyed. They're terrified. The planes come over and they make really, you know — even if they don't drop bombs — they make terrifying noises, scare people. There was a convoy two days ago, I think, which was entirely civilian, which got hit. There were 11 deaths and 74 injured. They all ended up in the hospital. So, we just bring people in off ambulances or whatever and take care about them and then send them back. Mostly people are not conscious, or people are really scared. It's just loads and loads of patients. Like the other day, I must have treated 40 people in one day. And I'm not a professional medic.

In the course of your job there at the hospital, do you have to be armed yourself?

No. We are working as civilians in the hospital. We work with the Kurdish Red Crescent.

Do you have any sense from where you are of how the Kurdish militias are holding up?

Not really. I mean, we get a lot of injured, generally. And yes, I mean, my impression is that people are just getting smashed, you know, this with the extent of the injuries that are coming in, with the bombings, with everything else. Of course, the ground army can't stand up against planes. We desperately, desperately need a "no-fly" zone. We desperately, desperately need the US or Russia to start stopping Turkey from flying planes over us because this is what's smashing people, what's killing people. If it was a fair fight, I think there might be a chance, but it's not a fair fight.

Many Kurds for decades or for more than a hundred years have been dreaming of establishing an autonomous Kurdish state. Is that no longer a possibility with this latest action with Syria?

I don't know. The idea here isn't to establish a Kurdish state. The idea is to establish democratic federalism, which is where people work together, and people live together, and people self-organize, so there's not a government in a sense of a nation-state government — but people like organize for their locality and they recognize what's good for them. And this is really, really a positive thing.

I've been living here now for nine months, and I've experienced the way that that works, and it works to unite people. You know, there are people here from loads of different backgrounds: Assyrians, Arabs, Kurds. Now loads of internationals, you know, and it works. Everyone works together. And it's healing the divide there's been in this country for a long, long time.