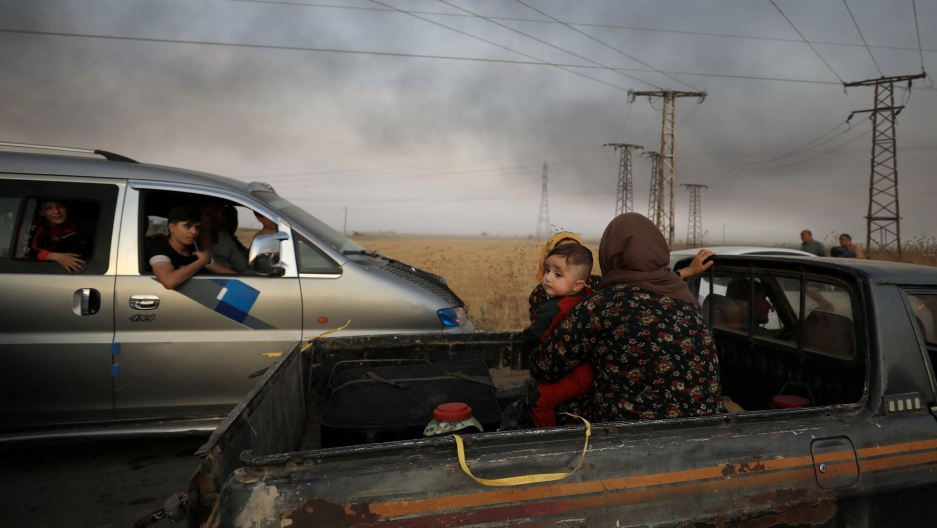 The turmoil and chaos in northern Syria is growing deeper. A Turkish military incursion following the pullout of US troops has forced tens of thousands of people to flee from their homes. The displacement is taking place in the Kurdish-controlled region of Syria, which until now had enjoyed years of relative peace.

Rojin Werger is a resident of the town of Sere Kaniya in the Kurdish region. The town, also known as Ras al-Ain, has been under heavy bombardment for the past few days. After she heard the Turkish soldiers were on the way, she escaped as bombs were falling to another Syrian town nearby, al-Hasakah.

Werger said she feels trapped. That's because Syrian troops are now also coming to her region.

"It is really disappointing and we are really angry and really sad about this, but there is no choice but that," she told The World's host Marco Werman. "So if this is going to stop the blood that is shedding, we are okay with that. But many of our sons and daughters have been martyred and gave their blood for this territory. Everything is going to go just like that. It is really sad and really disappointing."

Marco Werman: What were you hoping for?

Rojin Werger: I was hoping, just like everyone, we were hoping to have our own country, our own lives, our own freedom, our own rights.

Related: Kurds have a long list of reasons for seeking independence

I gather, though, some of the people from your town held celebrations this weekend. Apparently Syrian soldiers are on their way. What were the celebrations?

Some people who are staying in al-Hasakah really wanted the Syrian military to come back. They were celebrating. We could hear firecrackers till 1 a.m. They were happy that they are getting rid of the bombardments. They are getting rid of Turkey and [President Recep Tayyip] Erdoğan. So that's why they were celebrating, but not the Kurds. They weren't waiting for the Syrian regime to come back.

In terms of the fighting that's been going on for the last few days, I understand that you lost someone pretty close to you, a friend of the family.

Yes, he was a fighter. And he was martyred in Sere Kaniye.

Rojin, you've seen this kind of attack on Kurds before. I know you're 24 now, but when you were 16, you had to flee another Turkish incursion out of Syria. What is different this time, though?

The first time bombardments started, I went to my room and started collecting my books so I can go and study. We were allowed to cross the borders at that time. This time, when the bombardments started, I was in the middle of my room looking around. I couldn't, I couldn't bear to start collecting everything again. So I just took some money and my certificates of the university. And that's it. I couldn't take anything, even though I had clothes. I couldn't take anything, so I thought it was just useless.

We feel helpless. We feel like the time has stopped. Nothing is going to change.

Rojin, when I asked you earlier what you were hoping for, you said for the Kurds our own country, our own rights. And yet that homeland has always been so elusive. Do you still have hope that the Kurds can have a homeland?

I was talking with my friend a moment ago and she was really disappointed ... and asked me if we're ever going to go back to Sere Kaniye. I told her something, I said that if no one supports us, the whole world, our land won't accept any traitors. Our land won't be a traitor for us.

The whole world may be full of traitors, but not your homeland.

It won't accept anyone but us. We are going to go back to our homeland, because that soil isn't a traitor. It only will accept us.