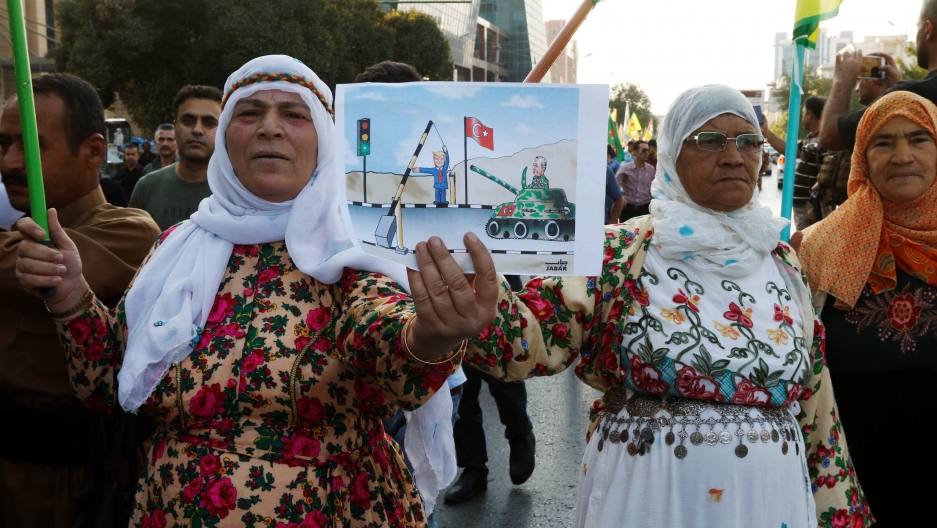 Kurds protest the Turkish offensive against Syria during a demonstration in Sulaimaniyah, Iraq, on Oct. 10, 2019.

Turkey stepped up its air and artillery strikes on Kurdish militia in northeast Syria on Friday, escalating an offensive that has drawn warnings of humanitarian catastrophe and turned Republican lawmakers against US President Donald Trump.

At least 11 civilians and dozens of fighters have died, according to BBC reports.

Related: Americans who volunteered with Kurds in Syria see betrayal of US values

The incursion, launched after Trump withdrew US troops who had been fighting alongside Kurdish forces against ISIS militants, has opened a new front in the eight-year-old Syrian civil war and drawn fierce international criticism.

In a Twitter thread Monday, Trump said the US withdrawal from Syria would be a thorn in the side of Russia and China, who "love to see us bogged down, watching over a quagmire, & spending big dollars to do so."

I was elected on getting out of these ridiculous endless wars, where our great Military functions as a policing operation to the benefit of people who don’t even like the USA. The two most unhappy countries at this move are Russia & China, because they love seeing us bogged.....

But analysts and officials aren't so sure. Many see the US rollback as a boon to Russia in particular, as it removes Russia's only military equal from the equation in Syria. The World spoke with Yury Barmin, Middle East and North Africa director at the Moscow Policy Group about Russia's main goals in the Syrian conflict.

Marco Werman: Turkish President Recep Tayyip Erdogan and Russian President Vladimir Putin had a phone call yesterday. What did they talk about?

Yury Barmin: According to the statements coming from the Kremlin they were talking about the Turkish operation in the northeast of Syria. Vladimir Putin sort of greenlighted this operation, but he asked the Turkish president to be very careful so as not to derail the political process that is ongoing, setting up the constitutional committee.

And by "be careful" — what does that mean? Are there any red lines that Russia is warning Turkey not to cross?

The main red line, of course, for everyone, is Syrian sovereignty. Syria should remain a united country. Of course, there are fears that this Turkish operation could grow into a buffer zone at the Turkish-Syrian border. The Syrian government is fully against these operations, as well as the Iranians, while the Russians are trying to be a little more flexible.

The Syrian constitutional committee is a body that is being formed under the United Nations. It's a body of 150 Syrians representing the opposition, the government, as well as civil society. From two years back, I think the Syrian constitutional committee has been closely linked to the Astana process — the process that is led by Russia, Iran and Turkey. And I think the fear here is that if the Turkish operation goes too far, the Iranians will not be interested in working with the Turks within the Astana form, so this is one of the red lines out there.

As Turkish military operations continue in northern Syria, what is Russia's main goal?

I think the main goal for Russia is not really in the northeast. The main goal for Russia is in Damascus, and the main goal is to legitimize the Syrian government, legitimize Bashar al-Assad. Russia generally has been trying to set up the talks between Damascus and the Kurds. This process has been ongoing for a year, but it really didn't lead to anything. Now I think Russians seek more rapprochement between the Turks and the Syrian government. There are very many conflicting interests in Syria, and Russia needs to balance between them.

So I think to an extent Russians are hedging in the northeast at the moment. They want to see who is going to be the first party that will reconcile with the Syrian government, basically.

Have Russian officials had any conversations recently with the Kurds in Syria?

Sergey Lavrov, the foreign minister, did receive some messages from the Kurds apparently indicating that they are ready for talks with Damascus. But we've heard these statements for a very long time, including in January 2019 when Americans withdrew from Manbij. So there is a lot of suspicion that this is being used by the Kurds as leverage against the Americans. So, yes, they are in constant contact with the Kurds. But unfortunately, so far, these contacts have not led to any rapprochement.

Do you think Turkey will stick to its promises to Russia to keep its ambitions limited in the north of Syria?

Well, look, first of all, Turkey didn't give any promises to the Russians. According to the plan that the Turkish president presented to the UN General Assembly, Turkey's goal is setting up a buffer zone in the Northeast. I don't think this is something that Russia would be happy with because that automatically means that Turks do not really need the Astana process that is led by Russia. I think Russians still see Turkey's operations in the context of the Adana agreement that was signed in the '90s between the Syrian government and the Turkish government. That agreement stipulates that Turks have the right to conduct limited targeted operations in Syria and I think this is exactly what Russians expect from the Turks.

Does Russia relish the opportunity to fill the vacuum left by the US?

Yes, but in a different way, I think. It just wants the government to come back. This has been their goal from the get-go. I don't think Russians have a genuine interest to manage this Syrian territory or to deal with every single problem. Russians just want a centralized government to come back. In terms of filling the void, it's very hard to imagine that the Russians will be able to do that in the northeast, specifically in the areas closer to the Turkish border, because these areas are still self-governed — actually well-governed. There are NGOs, there are a local administration councils. So I don't really think that Kurds expect Russians to fill that void.

So is Putin taking more of a watch-wait-and-see approach to see what happens next with with Turkey?

Well, I think that's exactly that. I mean, if Turkey goes too far, obviously Russians will have to react somehow, and there are ways Russians could pull the plug by, for example, closing the airspace like they did before. But until Turkey really goes too far and sort of sets up its own administrations there, sets up observation posts — I don't think Russians will intervene in any way.