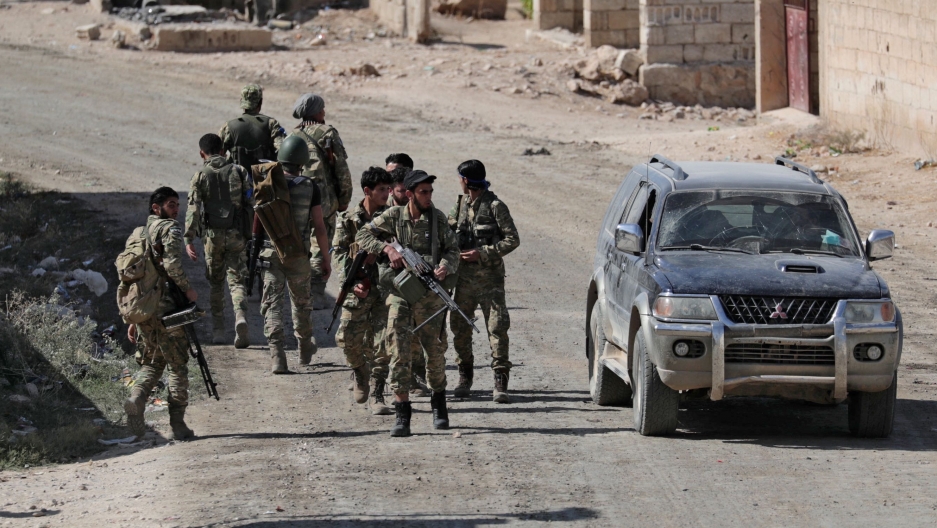 First, he saw the police in riot gear ringed around the Istanbul headquarters of the pro-Kurdish political party. Then, the news crackled over a taxi radio. Turkey had begun airstrikes in northern Syria.

“To be honest, it’s not the first foreign army in Syria. But it might affect us more — especially the reaction of the Turkish people.”

“To be honest, it’s not the first foreign army in Syria,” said a 28-year-old Syrian refugee in Istanbul. “But it might affect us more — especially the reaction of the Turkish people.”

The man and several others in Istanbul interviewed for this piece asked not to share their names, fearing the consequences of openly criticizing the Turkish government. More than 100 people have already been detained after sharing social media posts critical of the Turkish military operation this week.

At least 11 civilians have been killed and an estimated 64,000 displaced Kurdish-held areas over the first three days of fighting, according to aid groups. Another four deaths were reported across the border in Turkey, including a Turkish soldier. Observers caution that if the violence continues, hundreds of thousands in northern Syria's border towns could be forced to flee their homes.

Syrian refugees living in Turkey said they fear anger from their Turkish neighbors who have voiced complaints that Turkish soldiers are dying on foreign soil while Syrian refugees live safely in Turkey. The influx of 3.6 million Syrians into Turkey over an eight-year war has ground down the Turks’ initial warmth toward refugees, putting pressure on Turkish President Recep Tayyip Erdoğan to reduce their numbers.

“Anything in Syria is painted as for our benefit. But whenever Turkey does something inside Syria, we all know it’s in Turkey’s interest.”

“Anything in Syria is painted as for our benefit,” said a young refugee, who also requested anonymity. “But whenever Turkey does something inside Syria, we all know it’s in Turkey’s interest.”

Turkey’s goals in the attacks on Syrian border towns are twofold: First, to push back Kurdish-led militias that were backed by the US in the fight against ISIS and abandoned earlier this week. To Turkey, the militias are the Syrian affiliate of the PKK, a Kurdish separatist group that has carried out a series of attacks in Turkey that have killed at least 4,686 people since 2015, according to an analysis by the International Crisis Group.

Then, within an 18-mile wide “safe zone” that Turkey hopes to secure, Turkish President Erdoğan says he will settle over a million refugees in a series of planned communities along the border.

Population engineering if there was ever one.

When the proposal was first unveiled, the idea seemed preposterous. Mass resettlements of displaced people in a single location have few successful historical precedents. (People who voluntarily return to their country of origin often do so in the hopes of reconnecting with family members, new jobs, possibly an old hometown.) What’s more, US-backed, Kurdish-led militias controlled the area after routing the territorial presence of ISIS militants.

But the Turkish military’s latest incursion into the border zone following a US decision to stand back from the violence has intensified fears that if the operation succeeds, Erdoğan will have the physical space to make good on his wishes. This summer, the Turkish government began a stepped-up campaign to enforce residency permit rules, detaining hundreds and deporting an unlucky few back to Syrian territory — claims the Turkish government denies.

Related: US pullout from Syria could bring 'another rise of ISIS' researcher says

“They’ll have no option but to go back,” said a Syrian refugee in Istanbul. “We don’t know how it will be developed. There’s no economic perspective. Why force them to study Turkish and establish lives here, and in another five years — send them back?”

Defenders of the Turkish plan say critics underestimate how many Syrians want to return.

“I receive weekly, over a hundred calls, asking, 'How are we going to go back home? Are the Turkish army going to save our land?' We have fighters trying to get it back, but we need support from Turkey, too.”

“I receive weekly, over a hundred calls, asking, 'How are we going to go back home? Are the Turkish army going to save our land?'” said Samir Hafez, a Syrian community leader in Istanbul and member of the Turkmen minority. “We have fighters trying to get it back, but we need support from Turkey, too.”

Hafez sees the Turkish incursion as a way of preventing Syria’s division into ethnic federations. Like Turkish officials, he refuses to call the Turkish military’s takeover of Syrian villages near the towns of Tal Abyad and Ras al-Ayn an invasion. If residents had a chance to choose an entity to control an area, he claims, Turkey is a kinder, safer option than the Assad regime or US-backed Kurdish forces. He points to Turkey’s administration of Afrin as an example.

“They built schools, hospitals — really nice hospitals,” Hafez said. “Of course, it’s not easy to go in and rule a place where [there have] been — maybe there are — thousands of people who are still in favor of the regime in Syria. But if you look at the trade, and import and export, it’s been amazing.”

That operation, however, was rife with abuses against Syrian Kurds, Human Rights Watch reported.