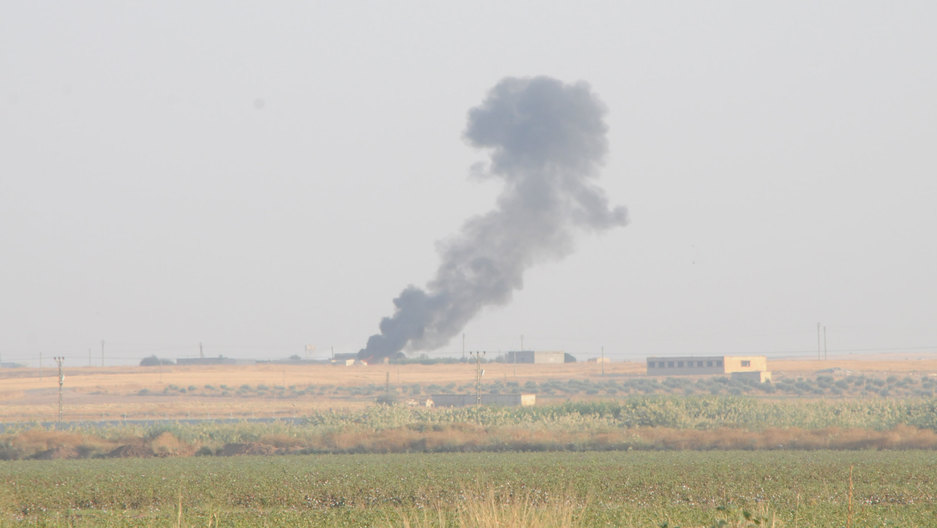 Smoke rises from the Syrian side of the border as it is pictured from the Turkish town of Akcakale in Sanliurfa province, Turkey, on Oct. 9, 2019.

Turkey attacked Kurdish militia positions in northeast Syria on Wednesday, pounding them with air strikes and artillery barrages in a cross-border military operation just days after US troops pulled back from the area.

Thousands of people fled the Syrian town of Ras al-Ain toward Hasaka province, held by the Kurdish-led Syrian Democratic Forces.

The Turkish airstrikes killed at least five civilians and three SDF fighters, and wounded dozens of civilians, the SDF said.

Turkish President Tayyip Erdoğan said the offensive was targeting "terrorists" — ISIS; the Turkish-Kurdish separatist group, the PKK; and their Syrian allies, the YPG. His stated aim is to destroy "the terror corridor on our southern border, and bring peace to the region." The Turkish President added that the operation will enable Syrian refugees to return to their homeland.

The assault on the Kurds — for years Washington's main allies on the ground in Syria — is potentially one of the biggest shifts in years in an eight-year war that has drawn in global and regional powers. The Kurds played a leading role in capturing territory from ISIS, and now hold the largest swathe of Syria outside of Bashar al-Assad's government's hands.

US President Donald Trump's decision to pull forces out of the way was denounced by some Kurds as a "stab in the back" and strongly criticized in Washington, even by loyal senior figures in his own Republican Party. The World's Marco Werman spoke with Mustafa Akyol, a senior fellow at The Cato Institute, a think tank in Washington, DC, about the policy shift and domestic politics in Turkey that are fueling Wednesday's attack.

Marco Werman: You're from Turkey but you're a critic of Erdoğan. How united is Turkey right now? What is the opposition saying about all this?

Mustafa Akyol: Well, interestingly, opposition parties — with one exception, the pro-Kurdish party — are also supporting this move, a bit reluctantly. But, you know, they don't want to look weak on, I think, national security, and the fight with the PKK, which is Turkey's main terrorist problem since the early 80s, is always popular in Turkey, and it is a never-ending war. So, I am among the people who think that there is no military solution to this problem and there should be a political solution. But now Turkey is in a very hawkish mood against the terrorists. And therefore, I think, unfortunately, it's a popular move.

And Erdoğan's statement that I quoted a moment ago, of destroying the terror corridor on Turkey's southern border — is that a fair explanation of what Turkey's goals are here?

I mean, to some extent, in the sense that — let me tell you one thing: I mean, in Washington, in the West, people are discussing the Kurds in Syria or the Kurds in the region, whereas I think we need more nuance. I mean, there is an Iraqi Kurdish region in northern Iraq and Turkey doesn't have a problem with this. It actually had pretty good relations for a long time. The Kurdish group in Syria, the armed group, which is a part of the Syrian Democratic Forces right now, is an ideological affiliate of the PKK, which has been fighting a terrorist war against Turkey since 1980s. And when Turkish people look to Syria, they see the same flag, the same slogans, the same photo of the leader, Öcalan. So, there is a PKK-istan being created on the Syrian border, and that's, I think, a legitimate concern of Turkey that is not being rightly always understood in the past few years in the West.

However, to think that you can enter into Syria, create a zone which will be free from this and you can keep that zone, that is another idea. And I don't think that's a good solution, that will not achieve anything. But, I think, President Erdoğan is doing this to look tough on terrorism at a time when his popularity is declining. Also, he has this idea, which is, also, I think, concerning to me that Syrian refugees inside Turkey — at least some of them, more than a million of them — will be transferred to this "safe zone." That, also, I think, is a concerning idea.

I mean, it sounds like Erdoğan has an immediate plan, and we're seeing it now going into this northern part of Syria. Longer term, it sounds like he's kind of building castles in the sky.

Well, yes. I mean, nobody really knows what this plan will achieve. People say all politics is local in Turkey. I say all politics is domestic; all foreign policy is domestic. So I think a lot of people in Turkey suspect that President Erdoğan is doing this to solve two issues that people always have in mind in Turkey — the refugees and terrorism. So he will look strong on those issues, and, maybe soon after, he will go for some early elections to further extend his mandate. So there might be some political calculations there as well.

What possibly then can be the long-term goal of this operation? Turkey can't seriously hope to occupy a slice of a neighboring country with a hostile armed population over many months or even years. Right?

We don't know it's open-ended yet. Yeah, Turkey can't do this forever. I think at some point, President Erdoğan will declare, "We achieved our goals." They might be hoping to come to an agreement involving Russia, Iran and the Assad regime, so they might convince the Kurds to pull out from the Turkish border inside. I mean President Erdoğan needs victories and at some point, he will declare victory and come back. Whether that will be a big gain, or not, that depends. But I think in the meantime, he might have an election in Turkey and President Erdoğan might do better than how he would otherwise do.

Do Turks worry that any of this could revitalize ISIS? They've been victims as much as anybody else of ISIS attacks.

Interestingly, there is less discussion about that. I think people trust that if the Turkish military is there, things will be under control. The chaos that can happen, in the meantime, I haven't seen much discussion about that. And interestingly ISIS is, of course, a terrorist group by Turkish definitions; Turkey has fought ISIS. That's something people forget. But, on the other hand, in the Turkish public consciousness, still, the No. 1 terrorism problem in the world is PKK. The PKK is there since the 1980s. The PKK is the force that killed thousands of Turkish soldiers, and, of course, a lot of Kurds died on the other side. But when Turks think of terrorism, that's the No. 1 thing that they still think about.