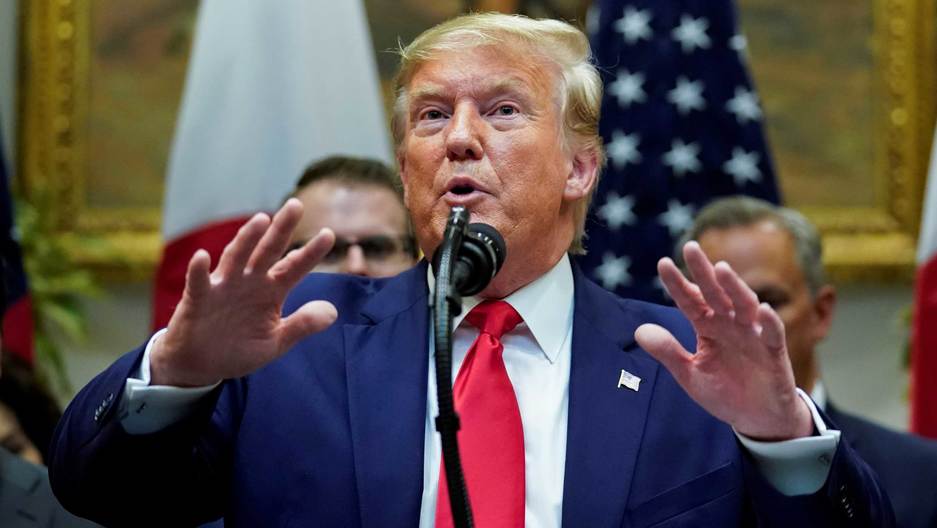 US President Donald Trump speaks about the US House impeachment investigation during a formal signing ceremony for the US-Japan Trade Agreement at the White House in Washington, on Oct. 7, 2019. White House officials sent a letter to Congressional leaders on Tuesday refusing to cooperate in the investigation.

The White House said on Tuesday it would refuse to cooperate with a "baseless, unconstitutional" congressional impeachment inquiry, setting Republican President Donald Trump on a collision course with the Democratic-led US House of Representatives.

In a letter to House Democratic leaders, White House lawyer Pat Cipollone cited in part the decision by lawmakers to proceed without a full vote of the House of Representatives.

"You have designed and implemented your inquiry in a manner that violates fundamental fairness and constitutionally mandated due process," he said, adding House Democrats had left Trump "no choice."

"In order to fulfill his duties to the American people, the Constitution, the Executive Branch and all future occupants of the Office of the Presidency, President Trump and his administration cannot participate in your partisan and unconstitutional inquiry under these circumstances," he said.

Related: As US focuses on impeachment, Ukraine worries about Russia

The letter came shortly after the Trump administration abruptly blocked a key witness in the Ukraine scandal from appearing before a congressional impeachment inquiry.

The US State Department said the US ambassador to the European Union, Gordon Sondland, a Trump political donor, would not be allowed to appear, even though he had already flown from Europe to do so. Trump decried the Democratic-led inquiry into whether he abused his office in the pursuit of personal political gain as a "kangaroo court."

Democratic lawmakers denounced the effort to block Sondland's testimony, calling it an attempt to obstruct their inquiry and said they would subpoena Sondland, to compel him to submit to questions. The State Department did not respond to requests for comment on why Sondland had been blocked from speaking to lawmakers just hours before his scheduled appearance.

The move and subsequent letter were the White House's most aggressive responses yet to the inquiry, which has cast a pall over Trump's campaign to win back the White House in 2020. A whistleblower complaint about a July 25 phone call in which Trump pressed his Ukrainian counterpart, Volodymyr Zelenskiy, to investigate his political rival, former Vice President Joe Biden, prompted the inquiry.

Biden is a leading candidate among Democrats seeking their party's presidential nomination to face Trump in next year's election.

The investigation could lead to the approval of articles of impeachment — or formal charges — against Trump in the House. A trial on whether to remove him from office would then be held in the US Senate. Republicans who control the Senate have shown little appetite for ousting Trump.

Trump has denied he did anything wrong in the phone call.

In the letter, White House lawyer Cipollone described the inquiry as "contrived" and called it "constitutionally invalid and a violation of due process."

He said the inquiry was "a naked political strategy" designed to reverse the 2016 election and influence the November 2020 election.

"Your transparent rush to judgment, lack of democratically accountable authorization, and violation of basic rights in the current proceedings make clear the illegitimate, partisan purpose" of the inquiry, the letter said.

Legal experts said the US Constitution gives the House broad discretion to decide how to conduct an impeachment investigation and that the Supreme Court would not second-guess the procedures Congress adopts.

"They can do the investigation in more or less any order they want," said Frank Bowman, a law professor at the University of Missouri and the author of a book on impeachment.

The White House letter aligned with a growing strategy by Trump's advisers to stonewall lawmakers' demands for witnesses and documents, question the legality of the inquiry and insist that while Trump's phone call was a mistake, it was not impeachable.

Related: Who is responsible for enforcing the US whistleblower law? The president.

Sondland's lawyer, Robert Luskin, said in a statement that his client "stands ready to testify on short notice, whenever he is permitted to appear."

"The president is obstructing Congress from getting the facts. That is an abuse of power to act in this way," Democratic House Speaker Nancy Pelosi told reporters in Seattle.

A Reuters/Ipsos opinion poll conducted on Monday and Tuesday found support for impeachment unchanged among all Americans — holding at 45% since last week — but rising among Democrats. Opposition to impeachment also dropped by 2 percentage points from last week to 39%.

Among those who identify as Democrats, 79% said Trump should be impeached, up 5 percentage points from a similar poll that ran Sept. 26 to 30. Only 12% of Republicans and about one in three independents supported impeachment, which is mostly unchanged.

Trump defended the decision not to allow Sondland to testify, writing on Twitter: "I would love to send Ambassador Sondland, a really good man and great American, to testify, but unfortunately he would be testifying before a totally compromised kangaroo court, where Republicans' rights have been taken away, and true facts are not allowed out for the public ... to see."

I would love to send Ambassador Sondland, a really good man and great American, to testify, but unfortunately he would be testifying before a totally compromised kangaroo court, where Republican’s rights have been taken away, and true facts are not allowed out for the public....

Democrats view Sondland as a key witness who can help shed light on whether Trump withheld military aid to Ukraine as part of an effort pressure them to investigate Biden and his son, Hunter Biden. Trump has denied any linkage.

According to text messages released by House committee leaders last week between Sondland and Trump's former envoy to Ukraine, the two US diplomats sought to set strict conditions for Zelenskiy meeting Trump at the White House, including Ukraine drafting a statement committing it to carrying out the investigations sought by Trump.

Sondland placed a call to Trump after a top American diplomat in Ukraine expressed concern that Washington was linking the US military aid to a request for an investigation that would help Trump's political campaign, according to a person familiar with the matter.

Sondland responded to the diplomat's text five hours later: "The President has been crystal clear no quid pro quo’s of any kind. I suggest we stop the back and forth by text."

The Sondland interview would have followed those of officials including the former US special envoy for Ukraine, Kurt Volker, and Michael Atkinson, the inspector general of the U.S. intelligence community.

A career diplomat, Marie Yovanovitch, is scheduled to meet with the committees behind closed doors on Friday. Yovanovitch was the US ambassador to Ukraine until Trump recalled her in May before her term was up, after the president's supporters questioned her loyalty.

A second whistleblower has come forward with direct knowledge of the allegations about Trump's efforts to get Ukraine to probe Biden.

Congressional staff and lawyers for the first whistleblower are close to making final arrangements for the witness to speak to congressional investigators away from Capitol Hill as early as this week, a source close to the parties said on Tuesday.