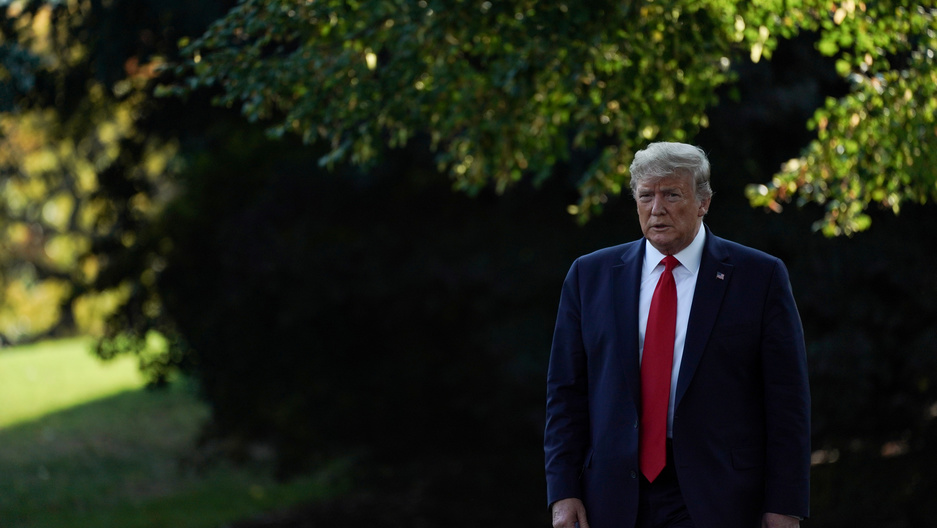 US President Donald Trump walks to address the media before boarding Marine One for a trip to New Mexico, on the South Lawn of the White House in Washington, DC, Sept. 16, 2019.

There's an explosive question gripping Washington: Did US President Donald Trump make an inappropriate promise to a foreign leader?

A whistleblower in the intelligence community made a complaint that appeared to involve communication with a foreign leader and a “promise” made by the US president, as first reported by the Washington Post. The "urgent concern" seems to center around Ukraine, and possibly a phone call between Trump and newly-elected President Volodymr Zelenskiy, a former comedian who won in a landslide election this April.

Trump has derided the claim as "fake news," tweeting, "Virtually anytime I speak on the phone to a foreign leader, I understand that there may be many people listening from various US agencies, not to mention those from the other country itself. No problem!"

....Knowing all of this, is anybody dumb enough to believe that I would say something inappropriate with a foreign leader while on such a potentially “heavily populated” call. I would only do what is right anyway, and only do good for the USA!

In August, Congress approved $250 million in military aid to Ukraine, which has been fighting a hot war with Russia since 2014. But at the end of August, Politico reported that the Trump administration seemed to be "slow-walking" that military assistance. Congressional Democrats and Republicans criticized the White House for delaying delivery of that funding. The administration released its hold on those funds and extended an additional $140 million, according to Ukraine's president, in the second week of September. The White House did not report the additional funds in its announcement that it released the hold on military aid.

Now, Trump's director of national intelligence is blocking Congress from learning more about the whistleblower's complaint. It's a murky story with plenty of unnamed sources and strong accusations.

The World's host Carol Hills spoke with Nina Jankowicz, a fellow at the Wilson Center's Kennan Institute in Washington, D.C., about the military assistance that Trump withheld from Ukraine's government.

"Many people forget that there is a war on the European continent right now ..."

"Ukraine is fighting a hot war against Russia," Jankowicz said. "Many people forget that there is a war on the European continent right now, and Ukraine needs all the support that it can get. So this is just helping Ukraine modernize its military and continue to keep Russia at bay. Often, you know, this is a diplomatic strategy that many in the State Department and the White House will use in terms of pushing reform forward. And here there was no ostensible reason why that aid would be withheld."

Carol Hills: Ukraine is a country that's trying to adopt Western values and be an ally with the US. Did they feel like this was a slap in the face to withhold this aid?

Nina Jankowicz: Absolutely, I mean, I think it's a slap in the face to Ukraine because they've been walking this long and difficult path of democratic reform for the past five years. This is not the type of value that we usually put before the democratic development of another country. Here, what we're doing is trying to secure the political future of one man and putting that above the democratic development and national security and sovereignty of another nation. And that just doesn't square with American values in my mind. Not to mention that, for the many doubters of democracy around the globe, we've just now, in a very public way, said that this is how the United States does democracy these days — in this sort of quid pro quo. And that's something that would have been unimaginable a couple of years ago.

$250 million isn't a whole lot of money when it comes to what Ukrainian troops really need, right?

That is a very good point and something that I'm sure many in Kyiv would agree with, especially considering that this war has been going on for over five years now and the great leaps and bounds and reform that the Ukrainian military has made in that time. It's a small amount of money, especially when you consider what our own Department of Defense military budget is every year. And I think it's a small token of support for a country that has been a beacon of democracy for many around the world over the past five years.

The US has now released the aid to Ukraine. Why did they do so?

Well, we don't know exactly why. I see one of three reasons. It could be that the Zelenskiy administration is now kowtowing to Trump's demands, although we have no indication of that. The administration has not released any comment since this story broke over the past 24 hours. The second possibility is that, because Congressman Adam Schiff requested that that whistleblower complaint be unsealed, it's possible the Trump administration decided at that point that the jig was up and the public would be finding out about the threat that they made to the Ukrainian government in that regard — withholding the aid in exchange for the investigation. And the third possibility is just that there was a large amount of public outcry, not only in the Ukrainian community, Ukraine-watcher community, but on the Hill. There is bipartisan support for military aid to Ukraine, and there was a lot of shock on Capitol Hill over the past couple of weeks as this was being withheld. So I think it could be any combination of the above but certainly the public outcry was significant and it's heartening to me to know that there is still that bipartisan support for Ukraine.