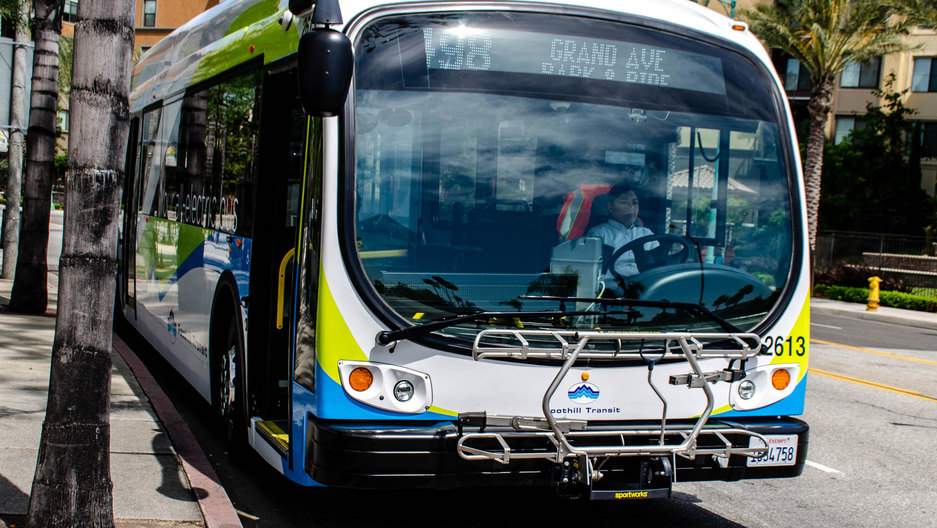 A driver for Foothill Transit in Los Angeles County navigates the streets in an all-electric bus.

Taking the bus to work can feel like the right thing to do — fewer cars mean fewer greenhouse gas emissions.

But most buses in the US run on dirty diesel fuel. Emissions from diesel contribute to air pollution, lung diseases and climate change.

The number of diesel buses in the US has steadily decreased over the past decade, replaced with compressed natural gas, biodiesel and diesel hybrid models. But electric battery buses — powered by renewable energy — run much cleaner.

In China, electric buses are everywhere. In the US, though … not so much. But the bus movement in the US is gaining momentum.

If you want to learn about electric buses, take a ride with Doran Barnes, executive director at Foothill Transit, the agency that moves people around the east side of Los Angeles County.

“As the first agency in North America to implement battery-electric buses, we have had visitors from literally around the world,” Barnes says. 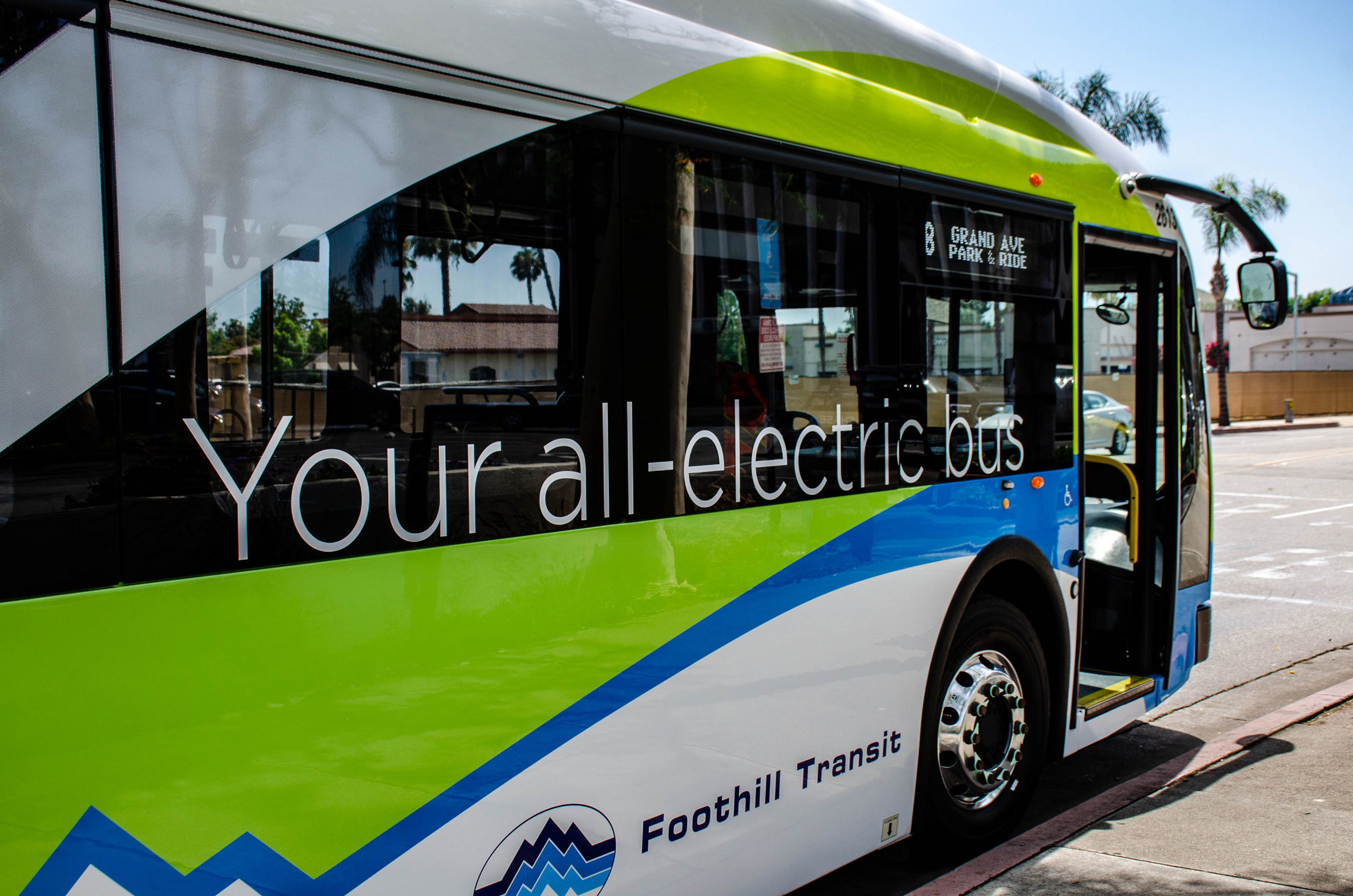 Not only are electric buses better for the environment, they’re also much quieter than a traditional bus.

“You don't hear the motor running, but you do hear the air conditioner,” says Barnes, his normal speaking voice easily heard as the bus rolled down the road.

Foothill Transit operates 33 electric buses, about a tenth of its overall fleet.

“To the best of my knowledge, we have the largest electric bus fleet in operation in North America today,” Barnes says.

By comparison, the Chinese city of Shenzhen has some 16,000 electric buses. China has more than 400,000 electric buses, about 99% of the world's total. That’s because a decade ago, China began prioritizing electrification of its public transit with subsidies and national regulations.

And in the US, the number of electric transit buses is in the hundreds. But those numbers are projected to grow rapidly as technology continues to improve and buses can go farther, as they’re proving at Foothill Transit.

“We have a fast charge bus that has about a 40-mile range. The beauty of that bus, though, is that it can charge in less than 10 minutes,” says Barnes. “The bus that we’re on today is an extended-range bus — that bus has a range of 190 miles.”

That 190 miles can cover a lot of daily routes. But when the extended-range electric bus runs out of juice, that’s it for the day — it has to recharge overnight. With diesel, you just go to the pump and fill it back up.

“Diesel buses are tough to compete with,” said Dan Raudebaugh, executive director of the Center for Transportation and the Environment in Atlanta, Georgia. “If I buy a diesel bus, and its got a 100-gallon tank on it, the average diesel bus gets about 3.8 miles a gallon, I've got 380-mile range sitting there.”

Yes, diesel buses can go about twice as far as most electric ones. But Raudebaugh doesn’t think we should be burning so much diesel.

"Buses operate 12 hours a day, not one hour a day like a passenger vehicle, so you're really getting a lot more done by converting a transit bus than you would be converting anybody's individual car."

“Transportation is the largest producer of greenhouse gases of any other industry,” says Raudebaugh. “Buses operate 12 hours a day, not one hour a day like a passenger vehicle, so you're really getting a lot more done by converting a transit bus than you would be converting anybody's individual car.”

And so, Raudebaugh says we should focus our efforts on electrifying buses.

But again, the problem is range. In the cold, bus batteries drain faster, working overtime to heat up the cabin. And in the desert, in Palm Springs, California, where summertime temperatures can hover around 115 degrees, batteries get taxed cooling passengers off.

“Our battery buses go about 130 miles, max,” said Lauren Skiver, the chief executive officer of the SunLine Transit Agency, which serves nine cities in the Coachella Valley, including Palm Springs.

Despite range limitations, SunLine has found a way to use its four new electric buses.

“We run them on our express route,” said Skiver. “So, they run in the morning, they come back in for an ‘opportunity charge’ in between and then they go back out in the afternoon. And then they come in the evening and we charge them overnight.”

SunLine also has fuel cell buses, which run on hydrogen. Those offer much greater range, but building hydrogen fueling stations is expensive and can take up valuable real estate in urban areas.

On the flip side, electricity rates to charge lithium battery buses are unpredictable and can fluctuate by the minute. All-electric buses can also cost about 50% more than most diesel buses, but that premium can be made up in fuel savings and lower maintenance costs.

And so, with no clear-cut best bus for tomorrow, transit agencies across the country are left to experiment. Many are working with the Silicon Valley start-up Proterra, the first, and largest, American-based electric bus manufacturer. 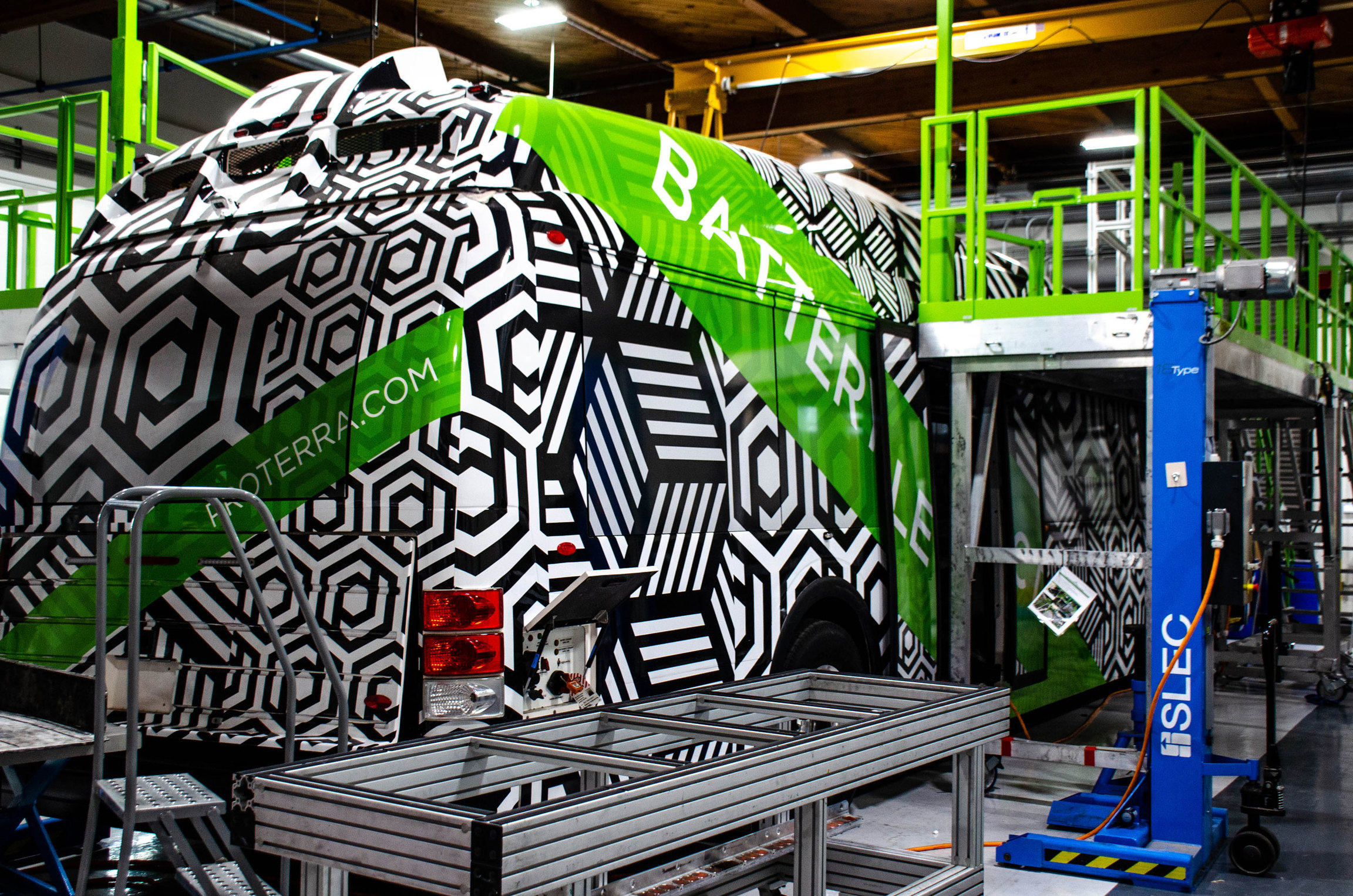 An all-electric bus at the Proterra factory in Burlingame, California.

At a factory in Burlingame, California, robots group batteries into packs that look like ladders that will fit on the underside of a bus. Proterra doesn’t just build the vehicles — they also help transit agencies set up the charging infrastructure to improve the range for their buses.

“These are two different versions of overhead chargers,” says Proterra’s chief executive officer, Ryan Popple, pointing to devices that look like wires that charge a traditional tram or electric trolley. “But instead of the vehicle constantly touching a wire to recharge, it pulls underneath one of these stations. The arm comes down and touches a connection point on top of the vehicle. So, it's possible for them to restore 10 to 20% of the range of the bus in just a short break, like a 10- or 15-minute break.”

Pretty easy, but the bus operator will have to factor in that downtime when planning routes. Some electric buses can also charge inductively, meaning using no wires. Like any new technology, charging solutions will continue to improve with more experimentation.

Back in the quiet bus, Doran Barnes says, we’ll get there, just look how far we’ve come since he drove a bus in college back in the 1980s.

"When I started as a coach operator, not only were electric buses not on the radar, but even natural gas-powered buses weren't on the radar."

“When I started as a coach operator, not only were electric buses not on the radar, but even natural gas-powered buses weren't on the radar,” Barnes says. “At that time, diesel was the fuel that was being used pretty much in all transit operations in North America.”

Barnes says Foothill’s entire fleet will transition to zero-emission. It’s actually not that bold of a prediction — it’s the law. California is the first state to mandate such a changeover.

The state estimates that retiring diesel and gas buses over a 30-year span will be equal to taking 4 million cars off the road.

And here’s one more perk: A survey showed that passengers think drivers of all-electric buses are friendlier, too.