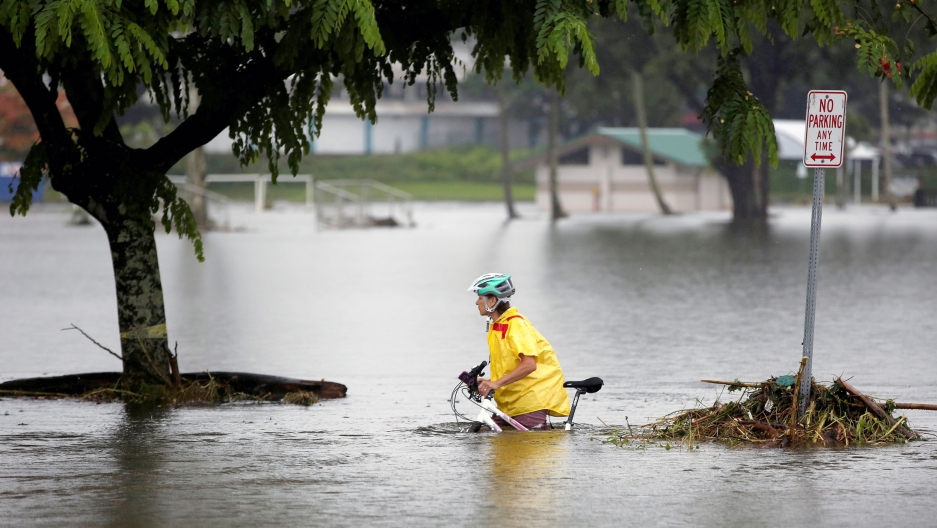 A woman pushes her bicycle through flooding caused by Hurricane Lane in Hilo, Hawaii, on Aug. 25, 2018. Hawaii received some 50-plus inches of rain last month, the third highest storm total rainfall from a tropical cyclone since 1950, according to the National Weather Service. As the climate warms, major weather events like the historical rains accompanying Hurricane Lane, could become more frequent and more intense.

You can think of global warming kind of like popping a bag of popcorn in the microwave.

Anthropogenic, or human-caused, warming has been stoked by increasing amounts of heat-trapping pollution since the start of the industrial age more than 200 years ago. But that first hundred years or so was kind of like the first minute for that popcorn — no real sign of much happening.

But then you get to that second minute, and the kernels really start doing their thing. And you can think of all those individual pops as extreme weather events — superstorms, extreme downpours, high-tide flooding, droughts, melting glaciers, ferocious wildfires. They’re like the signals that the climate is changing.

And in popcorn terms, “we are in that second minute,” says Inez Fung, an atmospheric scientist at UC Berkeley — in the throes of a problem we can now see unfolding all around us.

"Thirty years ago we predicted it in the models, and now I'm experiencing it,” Fung says. “You see the fires in the western US and British Columbia. And then at the same time, we’ve got fires, it rained three feet in Hilo, Hawaii, from [a] hurricane — that is a new record at the same time that we have droughts and fires, over 300 people died in India from floods. We are not prepared. " Across the US the average temperature has risen almost two degrees Fahrenheit since the start of the 20th century. And that’s only the beginning, says Bill Collin, who directs climate and ecological science at Lawrence Berkeley National Lab.

And he says that means a certain amount of future warming is already "baked in, if you will."

In other words, going back to that popcorn metaphor, even if you hit the stop button on the oven, some of those kernels will keep popping.

"If we were to stop emissions entirely of all greenhouse gases right this minute," Collins says, "we'd see roughly another half a degree centigrade by the end of the 21st century."

That’s almost a full degree Fahrenheit already in the pipeline. So even if we shut down all emissions — which is not happening — we might still get to the threshold of two degrees Celsius, or 3.5 degrees Fahrenheit, warming from pre-industrial levels, at which point many scientists say the worst effects of climate change would kick in.

"We're seeing years now that basically blow the roof off of records back to the late 19th century," notes Collins — and then a remarkable thought occurs to him:

"None of the students in my classes have grown up in a normal climate. None of them."

On the flipside, if you’re over, say 30, and can actually recall “normal," well, that’s over.

"I have to say that all the projections that were made 30 years ago are still valid," says Fung. "The only thing we had not anticipated ... is that the CO2 increases much faster than we ever thought that it would."

Despite the pledges made in Paris by nearly every nation in the world (the US under the Trump administration is alone among signatories in backing out of the climate accord), emissions are still rising. And even those historic commitments — if they’re all kept — won’t be enough to turn things around.

"No, we're already beyond that," says Fung. "The commitments, I think, are a very good start, but they're just not adequate." All this grim talk might lead one to ask what point there is in trying to reverse the climate train.

But recently refined climate models suggest that aggressively cutting emissions could at least blunt the impact of continued warming. It could, for example, reduce periods of extreme heat in California’s capital Sacramento from two weeks a year to as little as two days. The snowpack in the state’s Sierra Nevada mountains might shrink by “just” 20 percent, rather than 75 percent.

The Global Climate Action Summit being held his week in San Francisco will pull together mayors, state and provincial governors, scientists and corporate leaders from around the world and the US to try to keep momentum going with what are known as "subnational" actions to reduce greenhouse gas emissions — things done at the local, state and regional level.

They'll be joined by major players such as California governor Jerry Brown, who organized the conference and has helped position the state as a global leader in the fight to step climate change; former Vice President Al Gore; and former Secretary of State John Kerry, who signed the Paris accord on behalf of the US with his tiny granddaughter perched on his lap.

One of the themes attendees will discuss is "key building blocks required to peak global emissions by 2020," a goal that seems wildly optimistic given current emissions trajectories, and with barely more than two years to go.

"First thing we have to do as a global community is reverse course rather sharply," says Collins. "We think it is technically feasible."

Technically feasible, perhaps, but not easy. California, for instance, has the most aggressive efforts to cut greenhouse gases in the US and overall, it’s working — total emissions are down 13 percent since 2004. Still, climate emissions from cars and trucks are on the rise.

"Our cars are literally our time machines," Collins says. And they’re taking us backward.

"They're taking the atmosphere to a chemical state that it has not been in for millions of years," he says. "Currently, we have as much carbon dioxide in the Earth's atmosphere as we did five million years ago."

And that was a very different world, long before humans ever showed up.

In the space of a little over 230 years since the start of industrialization, Collins says "our steam engines, our factories, our cars … they've taken us back five million years."

And Collins says we have about 25 years — roughly one generation — to reverse course.

Collins and Fung both have their glimmers of optimism that technology and the boom in solar, wind and other forms of clean energy could quickly reduce climate emissions. Fung also points to the young college students passing by us on the Berkeley campus as her best hope.

But she and Collins agree that what’s running out is time.